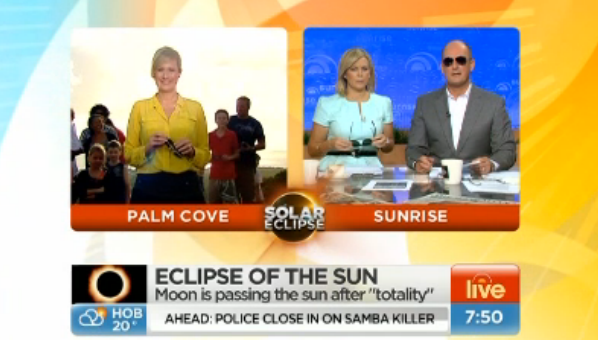 Tourism operators of far north Queensland are celebrating having hosted over 5000 people for a rare solar eclipse.

The world’s media is reporting on the event, with 5 million starwatchers worldwide expected to tune in to live streams specifically for the event. That doesn’t include let alone all the incidental viewing on news programs around the world.

Eclipse2012.org.au, a state-sponsored website, crashed for a short time after the event due to traffic volumes but was up again a short time later.

Eclipsecairns.com had the most detail for people curious as to how it happens.

The path of the Eclipse, indicated by the red line.. Some cloud cover was experienced in Cairns, but even Brisbane experienced 85% obstruction of the sun by the moon.

On Wednesday, November 14, 2012 (Cairns time) a total solar eclipse will be visible in Northern Australia and the Pacific Islands. Very few people have the opportunity to view a total solar eclipse as the shadow only covers a very small area of the Earth and you must be in a limited zone to see the moon cover the entire face of the sun.

Seeing a total eclipse is perhaps one of the most spectacular astronomical phenomenons that you will ever see. Being in the right spot is essential, and on November 14, 2012 the easiest spot to view the total eclipse will be in Cairns, Far North Queensland, Australia.

What is a solar eclipse? 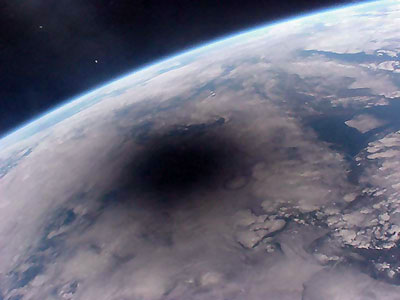 Above: What is a solar eclipse? How the moon blocks the suns’ rays, as viewed from space.

A solar eclipse occurs when the moon passes between the earth and sun close enough to block some or all of the sun’s direct light. A total solar eclipse occurs when the moon passes in front of the sun and blocks it completely, forming a shadow on the earth. For this to occur the sun, earth and moon come in a straight line in their orbits and it will seem like the moon has covered the sun.

What we see during a solar eclipse

Stages of the solar eclipse

There are five stages that are observed during a total eclipse.First Contact
First contact is the beginning stage of a total eclipse. Also referred to as a partial eclipse, the moon’s shadow first becomes visible looking like a bite has been taken out of the sun.

Second Contact
Second contact occurs just before totality. During this phase you may be lucky enough to witness Bailys Beads, which are distinct points of light seen on the edge of the moon’s disc. This is caused by the Sun shining through the valleys on the moon’s surface. The Diamond Ring effect is also seen in this phase, when only one point of light is left. When this disappears, totality has started.

Totality
Totality occurs when the shadow of the moon is covering the entire sun, with only the faint halo of the sun (corona) being visible. The corona is only visible during an eclipse and is an amazing sight. The temperature drops sharply, the sky becomes dark and animals and birds become quiet. 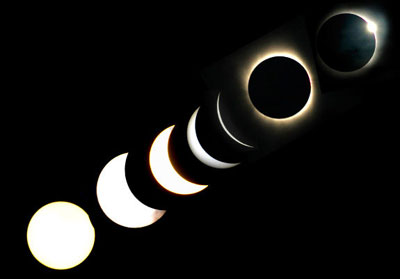 Third Contact
The fourth stage of a total eclipse is much like the second. The moon is moving away from the sun, Baily Beads and the Diamond ring may be observed.

Fourth Contact
The final stage of a total eclipse occurs when the partial eclipse of the sun ends and light is restored back to normal.

Other spots in Cairns to view the 2012 Eclipse

Please Note: Cairns City Council has released info on road closures for the Eclipse. Some roads are now closed to public vechiles. Please find an updated list below.

On the morning of the eclipse, there may be a significant increase in the number of vehicles using roads, particularly:

Road users travelling on the morning of the Eclipse should plan for delays and reconsider any non-essential travel.
If you do travel to view the eclipse, drive to the conditions and be mindful of safety when choosing a suitable location to park. If possible, try and find a local vantage point to avoid driving on major roads.

If you can’t avoid travelling by car to view the eclipse, drive to the conditions and be mindful of safety when choosing a location to park.

Oak Beach:
will be open to vehicular traffic however parking is limited. Once the limited parking capacity is reached the area will be closed. Viewing at Oak Beach is not recommended.

Wangetti Beach:
A large parking area will be available opposite Wangetti College for a gold coin donation to the school. The beach is accessible from this parking area along a 400 metre road. The beach access road will be closed to vehicle traffic for the morning.

Palm Cove Jetty:
Open until reached capacity. Fishing from the jetty is prohibited between midnight and 8am on Wednesday 14 November.

Flagstaff and Alexandra Range Lookout in the Daintree:
Closed.

Changed traffic conditions will also apply for the Eclipse Marathon and the Port Douglas Eclipse Festival. Please drive safely and obey all signage.