ACT reopens to parts of NSW 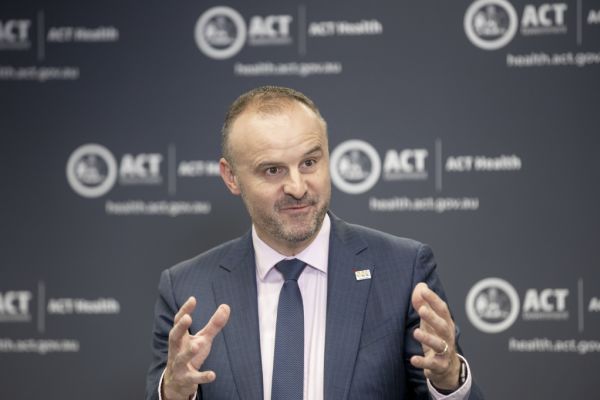 The ACT will expand the standing exemption border, to allow travel from the area immediately surrounding NSW.

ACT Chief Minister Andrew Barr announced the Territory would reopen its borders to a handful of regions in NSW from this Friday.

“From the 15th of October, the ACT will expand the standing exemption border postcodes to allow travel from a larger area of immediately surrounding NSW,” Mr Barr said.

“The expanded postcodes will” now cover towns such as Braidwood, Goulburn, Cooma and up towards the Snowy region as well as Gundagai.

Canberra’s borders have been closed to all of NSW since June, with towns on the NSW-ACT border such as Queanbeyan and Murrumbateman being the only exceptions to the restriction.

Residents across parts of the Southern Tablelands, Snowy Mountains and Riverina will now be allowed to enter and exit the ACT for work, study, schooling, essential shopping, health care and to visit family and friends.

They will not be required to apply for an exemption and will not need to quarantine on return to their NSW residence.

However, the same rules will not apply to ACT residents.

“Under both the NSW and ACT government restrictions, ACT residents still cannot enter NSW unless they are undertaking essential work, accessing a childcare arrangement or providing urgent care to a vulnerable individual,” Mr Barr said.

“NSW also have a vaccination requirement that excludes unvaccinated and partially vaccinated people from travel and access to non-essential activities.”

Mr Barr said he was negotiating a common travel agreement with the NSW government as the vaccination rates of both the ACT and NSW climb above 80 per cent.

The Chief Minister said the more significant border travel changes were anticipated to come into effect from late October, with an announcement outlining the details of the arrangement expected in the coming days.

Of the 28 new Covid cases reported in Canberra on Tuesday, nine were in quarantine during their entire infectious period, while at least 16 spent time infectious in the community.

Twenty-two have been linked to existing cases, but the remaining six are still under investigation.

Mr Barr confirmed there were now 19 Canberrans in hospital with Covid-19, including eight people in intensive caret.

The ACT’s lockdown is set to end on October 15 when the Territory transitions to “medium level” public health restrictions.