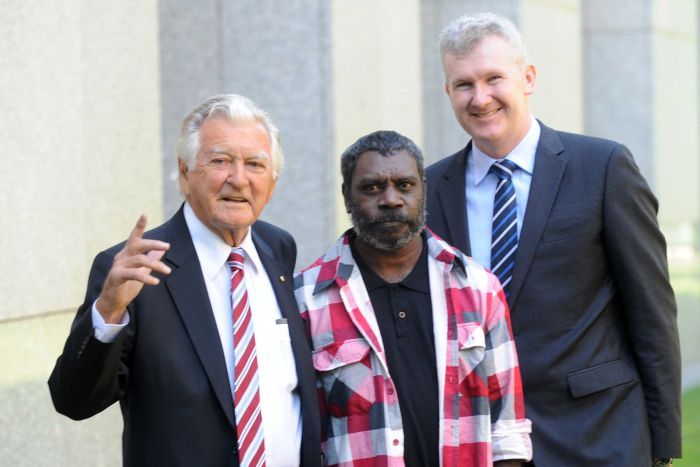 From abc.net.au Listen to the full Mp3 report from ABC radio’s AM program here: Koongarrakakadu.abc.net.au.mp3

Northern Territory park ranger Jeffrey Lee is celebrating as the Federal Government moves to protect his land from uranium mining.

For decades, Mr Lee, a traditional owner from the Djok clan who is the senior custodian of the land, had refused to allow the Koongarra uranium deposit to be mined.

The deposit, in the heart of Kakadu National Park, is worth just under $2 billion.

It was excluded from the park in 1979 so the uranium could be mined, and two years after that a mine was given environmental approval.

But traditional owners fought the proposal – a fight that took Mr Lee to Darwin, Sydney and even Paris.

Mr Lee then asked the Federal Government to incorporate Koongarra into Kakadu, a process that Environment Minister Tony Burke started on Wednesday morning.

“Today – this is the day. This is the moment that I was waiting for, (for a) very long, long time,” Mr Lee told reporters at Parliament House.

Mr Burke described Koongarra as a “hole in the heart” of the national park.

“There has always been, when you look at the boundary of Kakadu National Park, effectively a hole in the heart of it,” he said.

“If you go to the lookout where you’re looking across to Nourlangie Rock and you look across from that lookout that thousands of tourists visit every year, the land you are looking at is Koongarra.

“This legislation being introduced into the Parliament allows us to complete the legacy of work that was massively advanced during the years of the Hawke Labor government.”

“Kakadu is very important to me as well. I certainly lost some support over it,” he said.

“I didn’t have the numbers, but I had the authority so we got the right decision.”

The Completion of Kakadu National Park Bill will pass Parliament with the support of both major parties and the Greens.

But Dave Sweeney from the Australian Conservation Foundation says the name of the bill is highly deceptive because there are still uranium projects within Kakadu.

“There is an operating uranium mine, there is a proposal for a new underground mine, which is controversial, a new technique in Kakadu, and there’s also the stalled and halted Jabiluka project,” he said.

Mr Sweeney says both sides of politics need to stop any mining in the area.

“There’s an opportunity here to end an industry that’s caused a lot of heartache, a lot of headlines, a lot of contest and controversy,” he said.

“We could draw a line under it quite painlessly and quite quickly now.”

Mr Lee agrees and says Indigenous people will be better off in the long run if mining is banned anywhere near Kakadu.

“Kakadu is World Heritage. A lot of people come from all over the world to see Kakadu. We should be protecting all Kakadu, if you ask me,” he said.