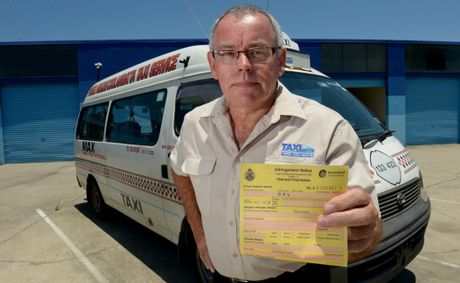 LATE night revellers trying to make their way home after a night out in Coolangatta may be left out in the cold without any means to get home.

A law introduced by the Queensland government and policed by the Department of Transport has cut Tweed taxi drivers’ income by up to 40% and left people trying to hail a cab home wandering the streets in search of a Queensland taxi willing to take them to their NSW destinations.

The law dictates that NSW taxi drivers are not allowed to pick up a passenger in Queensland unless it’s from cross border ranks at Marine Pde and Griffith St in Coolangatta or at Gold Coast Airport.

Only Gold Coast taxis are allowed to pick up passengers who hail a cab in Queensland.

Mr Godfrey said the severity of the fine was simply insane especially considering he was providing a service to the public.

“The size of the fine is ridiculous and will make Tweed cabbies very reticent to pick up anyone in the Coolangatta area,” Mr Godfrey said.

Mr Godfrey was caught when he was on his way to join the rank at Marine Pde outside KFC and a man hailed his taxi before asking to be taken to Tugun.

As soon as the taxi reached its destination in Tugun, two Queensland Department of Transport inspectors, who had been trailing the cab, made their presence known and asked Mr Godfrey if he was aware he’d broken the rules.

Mr Godfrey replied he felt he hadn’t done anything wrong.

The inspectors informed him he had illegally transported a passenger and fined him $1,320.

Mr Godfrey added the entire affair had really upset him and left him with a massive debt he was unlikely to be able to pay off quickly.

“The fine means I’ll be driving for nothing for the next five or six months.

“It also means passengers will be left standing and will be at risk.

“I have no problem accepting responsibility but the severity of the penalty is just too much,” Mr Godfrey said.

A Queensland Department of Transport and Main Roads spokesperson said the law was introduced to ensure the long-term financial viability of taxi services on the Gold Coast and to protect the taxi market from illegal operations.