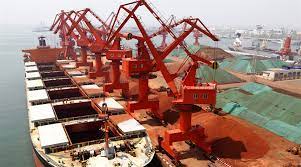 Beijing is attempting to cool iron ore prices, as the National Development and Reform Commission met with port operators this week to prevent the “excessive hoarding” of iron ore in a move aimed at significantly cutting stockpiles.

The National Development and Reform Commission met with port operators this week and urged them to increase the turnover of stockpiled iron ore in its latest push to tackle price speculation and hoarding.

“The meeting studied measures including greatly shortening the free storage period of iron ore for traders, increasing the cost of port hoarding, and preventing excessive hoarding,” the NDRC said in a translated copy of a statement posted on social media on Wednesday.

The NDRC also asked port operators not to stockpiles iron ore with the aim of driving up prices.

The NDRC’s statement followed its meeting with the market regulator to introduce measures which would shorten the free storage period for iron ore. It came as Bloomberg reported China was looking to set up a single, state-backed platform for purchasing iron ore, which would give it greater control over prices.

The state planner has made six statements since late January aimed at curbing price speculation. There was a sell-off in iron ore last week after the state planner and the market regulator told some iron ore traders to release excess inventory and reduce stocks to reasonable levels following a joint investigation in Qingdao, one of the country’s largest iron ore ports.

The NDRC on Wednesday reiterated its push to tackle speculation.

“The National Development and Reform Commission and the State Administration of Market Supervision pay close attention to changes in iron ore prices, and will work with relevant departments to further strengthen market supervision, resolutely and severely punish violations of laws and regulations such as fabricating and spreading information on price increases, hoarding, and driving up prices,” it said in a statement.

Rio Tinto this week reported a $US21.4 billion ($29.6 billion) underlying profit, the second biggest in Australian corporate history behind BHP’s 2011 result, partly on the back of record iron ore prices.

While regulators in China are determined to crack down on price speculation, Beijing is driving up demand for the steelmaking commodity by backing another construction and infrastructure spending boom in a bid to stimulate the slowing economy.

China said last year it wanted to boost domestic iron ore production by 30 per cent, significantly ramp up investments in overseas mines and strengthen scrap steel recycling under a plan designed to break Beijing’s dependency on Australia. However, those signals have done nothing to dampen China’s short-term enthusiasm for iron ore.

A slowdown in China’s GDP growth to 4 per cent in the fourth quarter has alarmed Beijing, which is again shelving concerns about debt to focus on growth.

The Chinese government will announce its official annual growth forecasts when Communist Party leaders meet in Beijing in two weeks for the National People’s Congress.