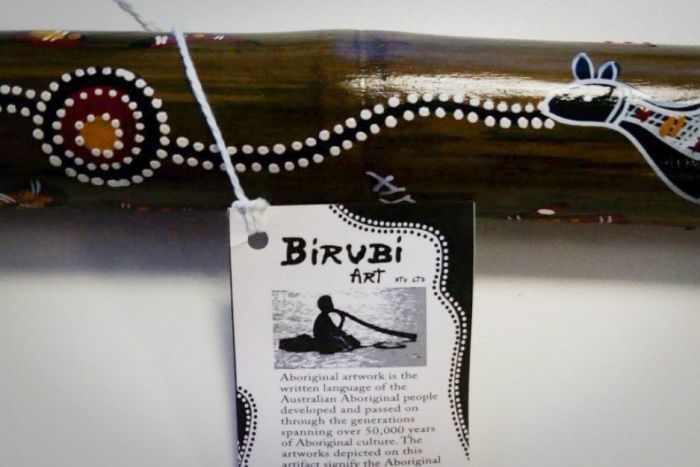 Birubi Art was fined in Jun 2019 for producing fake indigenous art – but in a strange twist, it’s been uncovered that Birubi is one of only two organisations licensed to print the indigenous flag on clothing.

A company has been handed a $2.3 million fine by the Federal Court for selling thousands of pieces of fake Aboriginal art.

The court found Birubi Art breached Australian consumer law and misled customers by promoting its products as genuine Aboriginal art, when in fact they were painted in Indonesia.

The company sold more than 18,000 boomerangs, bullroarers, digeridoos and message stones over 2.5 years.

In a landmark ruling, Justice Melissa Perry imposed a $2.3 million penalty, saying the fine aimed to deter other operators from undercutting the genuine Aboriginal art industry.

Director of the National Indigenous Art Fair Peter Cooley said the ruling was a “great start” in the campaign to protect the genuine Indigenous art industry from counterfeit products.

“We need those consumers to be confident when they are out there … that the piece they’re buying is actually authentic and it’s made by Aboriginal people,” he said.

“It’s lessening the value of that authentic art and it’s swaying people to be nervous about purchasing and ultimately they stay away from buying and that’s not what we need as Aboriginal artists and businesses.”

Gabrielle Sullivan from the Indigenous Art Code said the penalty was “some deterrence,” but it did not mean better protection for artists.

“I don’t want to downplay it, but I don’t think we should be confident it will address the real issues: there is still no protection around Indigenous culture and intellectual property,” she said.

She said this judgement was a win for consumers, who were less likely to be misled in the sale of Indigenous art.

“This is about Birubi being misleading and deceptive on their packaging and labelling and presentation of products, it wasn’t about fake art or unfair licensing agreements,” Ms Sullivan said.

“We’d like to see some amendment to the Australian Consumer Law so that there’s a prohibition on selling fake art or producing products under unfair licensing arrangements, because we see that as a big issue.”

In her judgement, she said while it was unlikely the company would ever pay such a fine, it was in the interest of general deterrence that such a hefty penalty be handed down.

“There was is a need for robust penalties to strongly discourage conduct of this kind.”

Birubi Art is now in liquidation and the ABC understands it is unable to pay the fine.

“This penalty sends a strong message to anyone considering selling fake Australian Aboriginal-style art as the genuine article,” she said.

“Birubi’s actions were extremely serious. Not only did they mislead consumers, they were liable to cause offence and distress to Australian Aboriginal people.”

She said the consumer watchdog would go after any other dodgy operators.

“The ACCC took this action because the misleading conduct has the potential to undermine the integrity of the industry and reduce opportunities for Australian Aboriginal peoples,” Ms Court said.

A non-Indigenous company that holds worldwide exclusive rights to use the Aboriginal flag on clothing, and has issued infringement notices to the AFL and several Aboriginal companies that use it, is part-owned by a man who has previously been prosecuted by the Australian Competition and Consumer Commission (ACCC) for selling fake Aboriginal art.

WAM Clothing has issued a series of “cease and desist” notices to several companies, including the AFL, which uses the flag on jerseys for the Indigenous round of matches.

The AFL has confirmed it has been “in communication with WAM Clothing in relation to the use of the Aboriginal flag.”

“These discussions are ongoing,” the AFL spokesperson says.

WAM Clothing was granted the exclusive use of the Aboriginal flag on clothing by its designer and copyright holder, the Luritja artist Harold Thomas, in November 2018.

Late last week, a number of Aboriginal-owned businesses received letters from WAM Clothing, warning them them of “urgent action required” regarding a breach of their exclusive licence, and providing three business days to stop selling clothing featuring the Aboriginal flag.

“Time is of the essence,” the letter states.

A spokesperson for WAM Clothing said the company “has a strong desire to promote the Aboriginal flag in a positive light”, and “has been actively inviting any organisations, manufacturers and sellers who wish to use the Aboriginal flag on clothing to contact us and discuss their options”.

“Until WAM Clothing took on the licence for clothing with Harold Thomas, Harold was not receiving recognition from the majority of parties both here and overseas, who were producing a huge amount of items of clothing bearing the Aboriginal flag,” the spokesperson said.

Spark Health, an Aboriginal-owned and run social enterprise that produces clothing merchandise with the tagline “Clothing the Gap”, received a letter on Thursday.

Sianna Catullo from the Clothing the Gap project said all the profits from the sale of the clothing goes to Aboriginal health promotion and community engagement, including programs in schools, prisons and sporting clubs.

Catullo said she could not understand why a non-Indigenous owned business would want to license the Aboriginal flag.

“We make our merchandise for the mob … we make it for them so they can celebrate their identity and wear their culture with pride,” Catullo said. “We don’t make our clothes to profit.

“I’m not sure what their connection to community is, but it’s definitely not as strong as our connection, or that of the other Aboriginal businesses that are being hurt by it.

“The flag represented the struggle and the resistance. It’s a symbol for all Aboriginal people to use, together, that unites us.

“I’ve got the flag tattooed on me, so the flag to me, I’m extremely proud of it, and I believed in its strength but it’s sort off been taken off us now.”

WAM Clothing claims that Spark Health has “not taken up WAM Clothing’s invitation to discuss the correspondence or options available”, and it has offered to share “a portion of its profits” with grassroots programs and organisations.

WAM Clothing was founded in 2018 by Semele Moore and Ben Wooster. Wooster has had a previous association with Thomas, the flag’s designer and copyright holder.

In 2017, Thomas released a statement announcing he had granted two licences for the design – one to the flag-making company Carroll and Richardson, and the other to a separate company owned by Wooster, Birubi Art Pty Ltd.

Birubi Art – which is under administration – is a wholesaler of souvenir and Australiana products based in Kippa-Ring in Queensland, the same location as WAM Clothing. Wooster is also part-owner of WAM Clothing.

“I, Harold Thomas, would like to make a sincere statement of how the Aboriginal flag design has been utilised by Birubi Art Pty Ltd, and Ben Wooster of Brisbane,” the statement signed by Harold Thomas says. “I have been associated with Ben Wooster for more than 10 years. Ben’s company Birubi Art has an exclusive licence agreement to utilise the Aboriginal flag design for their products.

“Ben Wooster has maintained a professional standard of the highest order. He appreciates the sensitivity and is cognisant of what the Aboriginal flag design is to the Aboriginal people as well as others.”

WAM Clothing released a statement it claimed was directly from Thomas: “As it is my common law right and Aboriginal heritage right, as with many other Aboriginals, I can choose who I like to have a licence agreement to manufacture goods which have the Aboriginal flag on it.

“It’s taken many years to find the appropriate Australian company that respects and honours the Aboriginal flag meaning and copyright and that is WAM Clothing.”

In October 2018, at around the time WAM Clothing was granted exclusive licence to use the flag, the federal court found that Birubi Art had “made false or misleading representations that products it sold were made in Australia and hand-painted by Australian Aboriginal persons, in breach of the Australian consumer law”.

From July 2015 to November 2017, the ACCC says, Birubi sold more than 18,000 boomerangs, bullroarers, didgeridoos and message stones to retail outlets around Australia, featuring designs “associated with Australian Aboriginal art” and words such as “Aboriginal Art”, “genuine” and “Australia”, but which were actually made in Indonesia.

“It was unacceptable that Birubi sold Indonesian-made products as having being hand-painted by Australian Aboriginal persons when that was not the case,” ACCC commissioner Sarah Court said at the time. “The ACCC is particularly concerned about any conduct that has the potential to undermine the integrity and value of genuine Indigenous Australian art and consequently the impact that could have on Indigenous Australian artists.

“The ACCC will not hesitate to take further action against traders who mislead consumers about the nature of their products.”

A hearing on penalties and other orders sought against Birubi by the ACCC will be held by the federal court on Friday.

The chair of the Australian copyright council, Kate Haddock, said Thomas was entitled to exercise his copyright.

“He owns it, he created it,” Haddock said. “I presume he willingly entered into an agreement with WAM Clothing to do this.

“It’s a little confusing because he has been widely reported in the past as saying there are some uses he would not charge people for, and I think that Indigenous health is one of those areas.”

… like you, are reading and supporting The Guardian’s independent, investigative journalism than ever before. And unlike many new organisations, we have chosen an approach that allows us to keep our journalism accessible to all, regardless of where they live or what they can afford. But we need your ongoing support to keep working as we do.

The Guardian will engage with the most critical issues of our time – from the escalating climate catastrophe to widespread inequality to the influence of big tech on our lives. At a time when factual information is a necessity, we believe that each of us, around the world, deserves access to accurate reporting with integrity at its heart.

Our editorial independence means we set our own agenda and voice our own opinions. Guardian journalism is free from commercial and political bias and not influenced by billionaire owners or shareholders. This means we can give a voice to those less heard, explore where others turn away, and rigorously challenge those in power.

We need your support to keep delivering quality journalism, to maintain our openness and to protect our precious independence. Every reader contribution, big or small, is so valuable.