Tales of bravery from WA 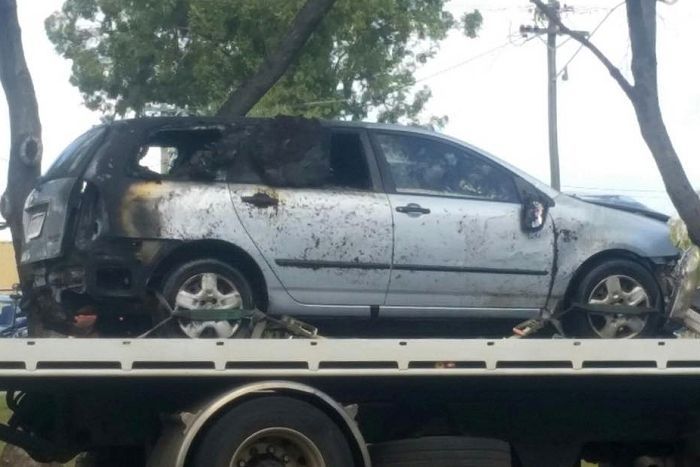 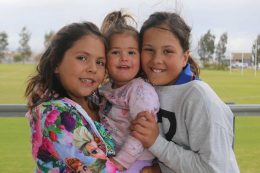 PHOTO: Ella (left) and Emily Andrews (centre) were at the park with their sister Tayla (right) and their parents when the dog attacked. (ABC News: David Weber)

A seven-year-old Perth girl who picked up her toddler sister and held her aloft to save her from an attacking rottweiler dog is among a group of West Australians to be honoured with bravery awards.

Ella Andrews, who was awarded a Commendation for Brave Conduct, was at a public park at Piara Waters in Perth’s south with family and friends when she saw the dog heading towards her 18-month-old sister, Emily.

She quickly picked Emily up off the ground and held her high as the dog bit Ella on the arm, causing a deep gash.

Ella said it was exciting to receive the commendation but described the incident as “very scary”.

“And it ran past and then it ran back to me and then it started jumping, tried to get Emily.

“I thought she was bleeding so I was really scared.”

“I was worried about both of them but if the dog had have got Emily, she was only one-and-a-half at that time, it would’ve got her whole body,” she said.

Ella was admitted to hospital for a couple of nights so doctors could ensure she did not have an infection.

“She’s good now, she’s only got a scar on her arm, but she’s still terrified of dogs and the scar’s probably going to be there … forever,” Ms Timms said.

“It’s not good to have dogs attack little kids and it was probably both the dog’s owner and the dog’s fault.

“The dog was off the lead when there were lots of kids around so [it was] an unfortunate accident, but yeah, it probably could’ve been avoided.”

Ms Timms said the family welcomed the commendation, which came as a surprise.

“I think it’s really good to have something good come out of what happened to Ella because I know it was a very traumatic experience for her,” she said.

“Everyone was just amazed by, like, a seven-year-old could be so selfless and to just think to help her sister before what could happen to herself. I think it’s just an amazing thing that someone so young can actually think to do that.

“And I guess it just brings hope that there’s lots of people out there that would put themselves at risk to save other people.”

The dog was not put down, but the owners were fined.

Trio’s desperate bid to save children from burning car

Robin John Lee, Jake Wilson Pugh and Ian Trevor Urquhart were recognised for rescuing a man and his two daughters from a burning car in Orelia in April last year.

They have been awarded a group bravery citation.

Mr Pugh had stopped to help, saw flames and grabbed a fire extinguisher from his own vehicle.

“I thought it was coming from the motor, it put [the fire] out for a while,” he said.

He emptied the extinguisher, buying valuable seconds for Mr Lee, who went into the back of the stricken vehicle.

“There was a young girl, she was holding her side, it looked at that time she’d been speared by the tree,” he said.

“There was an elderly gentleman at the back of the car and as I got out the back door I handed her to him and went back in again.

“The infant was still in the child seat hanging upside down and the baby’s just looking at me like, with this grin on its face. She only cried the moment that I released her from her harness.”

The drama was not yet over, as people started warning that the fire had not gone out.

“I heard the father scream at the same time saying that he was on fire, this time I had to get over into the driver’s seat to free him,” Mr Lee said.

“The young girl, she was in too much pain and everyone was having trouble moving her so she was only about four metres away from the car.

“Everyone’s yelling around us that the car’s gonna go.

“The lady who was looking after the young girl, I suggested she should get out of the way — and she said no. The best thing I could do then was just tower over the top of them and cover them as best as I could.

“And the car went up. You could hear everything hitting around us but nothing come close. It was like we had a shield around us at that time.”

Mr Lee, Mr Pugh and Mr Urquhart, who didn’t know each other before, are now united in the citation.

“[I} wasn’t really after any attention, I just reacted on the day … to be considered was a bit of a surprise and it is very humbling,” Mr Lee said.

He said it was encouraging to see others helping and trying to help.

“It’s good to know that there are people out there that will do that. If everybody could have that impact the world will be a far better place.”

Man saved seven with boogie board

Jason Troy Shepherd has been given a Bravery Medal for rescuing seven people at Nanarup Beach, near Albany, in February 2017.

He saw a group of people in distress because they were caught in a rip.

Mr Shepherd, using a boogie board and swimming by himself, rescued all seven of them, including several children. 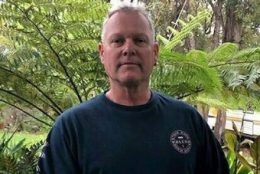 “They just could not get back in,” he said.

“I’m sort of coaching three of them to hang onto my boogie board and the other two older girls to swim across the current until we could stand up and walk back to the beach.

“I’ve looked out and there’s two more kids from another family who were getting sucked out to sea as well.

“We got on the beach and they gave us a hug and all that and thanked me very much because I reckon they were goners.”

He said it was an instinctive reaction to help, and said he felt humbled about the Bravery Medal.

“There was no-one else on the beach, no-one else out on the water, and I could see they were in trouble,” he said.

“It’s good I suppose. I was happy but I’m not one for jumping in the spotlight, that’s for sure.”

Mr Shepherd, a marine rescue volunteer, said people should be aware what a dangerous place the ocean could be.

Father’s brave attempt to save daughter from shark

Leon Brouwer has been awarded a Bravery Medal for going to the rescue of his daughter as she was being attacked by a shark.

Laeticia Brouwer, 17, was attacked by a great white about 200 metres off shore at Kelps Bed Beach near Esperance on April 17, 2017.

Mr Brouwer swam out to his daughter and pulled her onto his surfboard. 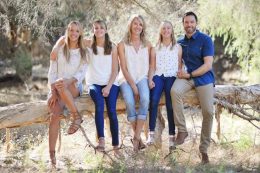 He made his way back towards the shore as the shark circled them.

First-aid was attempted and emergency services were called but Ms Brouwer could not be revived.

Mr Brouwer has been commended for displaying “considerable bravery” through his actions.

Andrew Gordon Strunk has been awarded a Bravery Medal for helping a woman trapped in her vehicle after part of the facade of a building collapsed onto it.

The woman was parked outside the former Matilda Bay Brewery building in North Fremantle when strong winds caused brickwork to fall.

The roof of the car she was in was crushed and the woman was forced sideways, with her head stuck through a window. 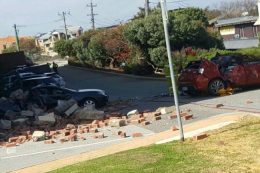 PHOTO: The woman was injured when part of a three-storey brick wall collapsed. (Supplied: Mark Evans)

Mr Strunk and others came from a nearby gym and started removing the debris.

The off-duty firefighter went to get a first-aid kit and saw that the winds could cause more bricks to fall.

Mr Strunk cleared more debris, before co-ordinating others to form a huddle behind the vehicle, pushing it into the street and away from danger.

Emergency services personnel arrived and freed the woman, who was taken to hospital.