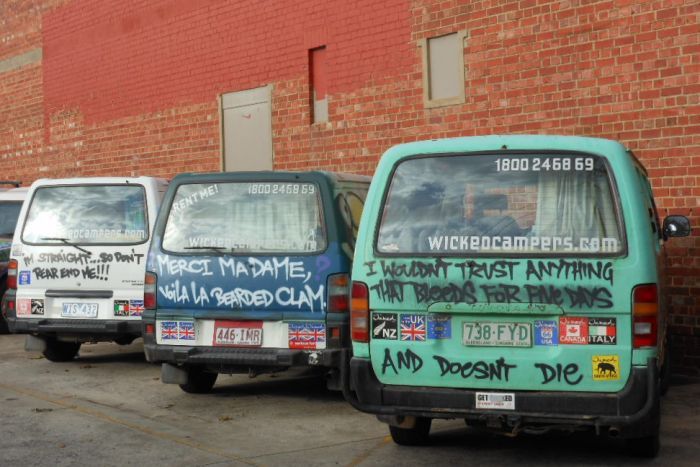 With Victoria leading the charge, every state and territory has now agreed to take action against Wicked Campervans.

State and federal transport ministers have agreed on a national strategy to crack down on vehicles with offensive slogans.

Queensland, Tasmania and the ACT have already moved to deregister some Wicked Campers vehicles over their offensive signs, but some of the banned vehicles were simply reregistered with interstate plates.

At a meeting in Adelaide, the ministers agreed to harmonise laws across the country.

“We want to make sure that we close down these loopholes, stop the scourge of these offensive advertising and materials on the sides of these campervans — but we need to do it in a nationally consistent approach,” South Australian Transport Minister Stephan Knoll said.

They will be banned from travelling on Victorian roads under new laws to be introduced to the Victorian Parliament.

Under the laws, any vehicle that displays a sexist, offensive or obscene slogan can be referred to the Ad Standards Community panel.

If that panel finds the slogan is in breach of the standards, it would have to be removed or the vehicle’s registration will be cancelled.

An Opposition bill before South Australia’s Parliament targets companies like Wicked Campers, and would allow authorities to deregister vehicles if a company failed to act on rulings by the Advertising Standards Bureau.

In January, the bureau ruled a Wicked van registered in South Australia had breached the advertising industry’s code of ethics, but nothing has been done to remove it from the road.

Mr Knoll has previously argued the law would not be effective without a nationally coordinated approach, as Wicked could simply re-register its vehicles in another state not covered by the rules.

Last year, Queensland Main Roads Minister Mark Bailey said that without a national approach, it was hard to keep vans with slogans that have breached the Ad Standards Code of Ethics off the road.