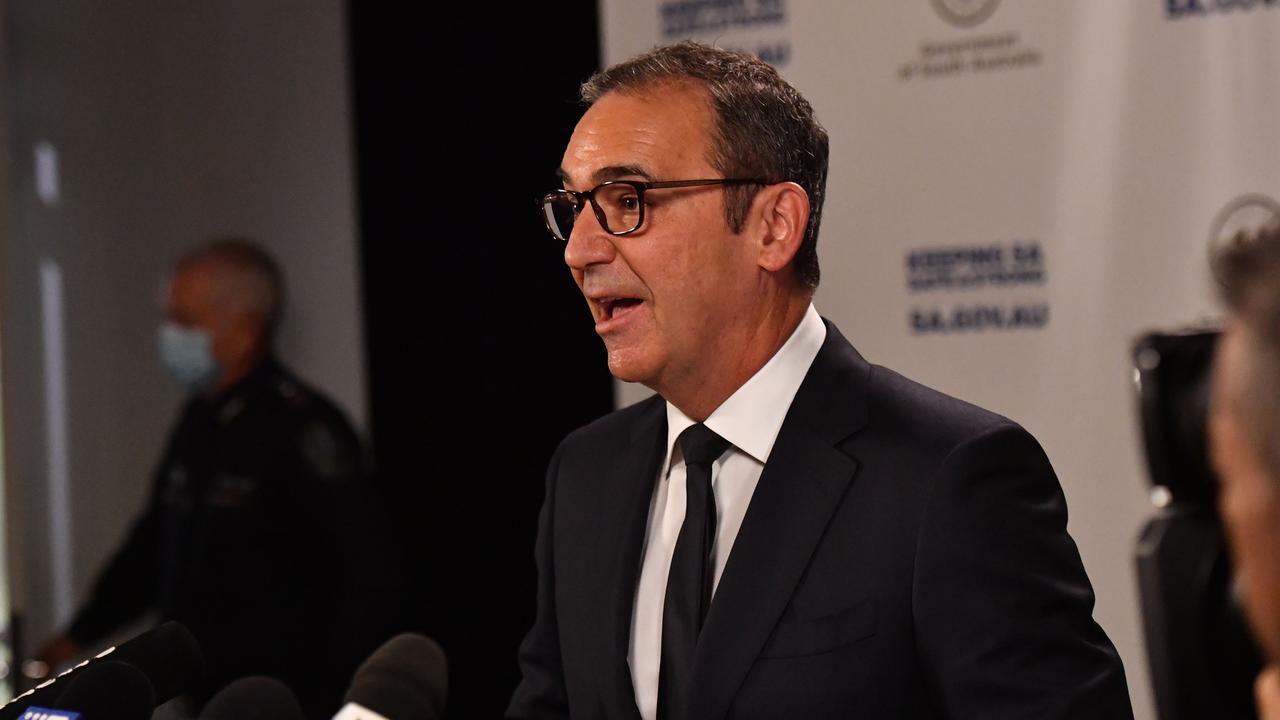 Fully vaccinated residents from Victoria and almost all of NSW will be allowed to enter South Australia from next Tuesday without quarantining.

As foreshadowed by The Advertiser, Premier Steven Marshall announced the state and federal governments had crunched the new numbers and fixed the data error just days before borders reopen.

He also announced that the new traveller pre-registration process, EntryCheckSA, would go live this afternoon and a boost in Covid testing from next week.

Mr Marshall declared that every Local Government Area (LGA) in Victoria and all but the Byron Bay Council council zone in NSW had reached a vaccination target of at least 80 per cent.

This includes Melbourne and Sydney CBDs, where a data anomaly meant vaccination rates were significantly underreported.

Precise numbers were not available, but Mr Marshall said central Sydney and Melbourne were “well above” the 80 per cent threshold.

Mr Marshall said the news will be a welcome relief to those who have been worried and frustrated about the confusing rules.

Under the border rules which come into force on November 23, fully vaccinated travellers entering the state will only have to isolate if they arrive from an LGA with community transmission and a double-jab rate of less than 80 per cent.

The details emerged as Police Commissioner Grant Stevens formally approved an increase in home gathering caps from 20 to 30 from Tuesday.

Mr Stevens, who makes all legal directions as state Covid co-ordinator, said the border reopening was “locked in” and with it much joy to thousands of families and important changes that will allow people to travel freely for business.

“The reality that we may not be right at that 80 per cent mark, but I think it was the right thing to do to identity a date based on the forcasting and lock it in so people could make plans,” he said.

“But that doesn’t mean people should not get vaccinated. We’re still encouraging to get out there and get their first and second dose. It is important to the community.”

Under a new matrix released on Friday, travellers from low and moderate risk areas must have a Covid test up to 72 hours before arrival in SA.

They must also have a daily symptom check using a new app, HealthCheck.

Those from “high risk” areas or international arrivals must quarantine for seven days, either at home or, if this was unsuitable, at a medi-hotel.

High risk locations are those with community transmission and a less than 80 per cent double vaccination rate.

They will be banned from entering state-based “high risk” locations such as hospitals or aged care facilities, as well as large-scale events of more than 1000 people such as the Ashes Test series.

They must also seek Covid testing on days six and 13 along with daily symptom checking.

It must be used by people entering South Australia from any state or country.

The app will allow travellers to enter their details and they will be provided with their ‘risk level’ and conditions.

A VaxCheck app, which shows a person’s vaccination status, has also been developed, and will be live before borders open next Tuesday.

“We are the first jurisdiction in the entire country that is Covid-free that is opening its borders,” Mr Marshall said.

“We will have to be more careful than we have been in the past.

“But we are good to go on Tuesday next week, we have made all the necessary precautions.”

He urged people once again to get their Covid jabs ahead of the borders reopening.

“There are thousands and thousands of vaccination appointments available today.

“The best thing you can do for yourself, your family, your friends and your state is to go and get an appointment now.

“When we look interstate and see the people who are ending up in hospital, in ICU, on ventilators, they are by and large unvaccinated.”

Mr Marshall said Adelaide’s biggest testing site at Victoria Park, along with the Ridgehaven clinic in the northern suburbs will be a 24-hour a day operation from Tuesday.

At least 100 extra staff will enlisted to SA Pathology to boost testing operations.

She said children aged from 12 years and two months would be required to be double-vaccinated to enter South Australia.

Dr Kirkpatrick said the Entry Check system would streamline the application process and provide, in some cases, automatic approvals.

“We’re definitely expecting a surge of travellers coming across … we’re expecting thousands of people to apply from 5pm this afternoon,” she said.

A list of LGAs under the 80 per cent threshold will be listed on the SA Health website.

Dr Kirkpatrick said SA Health would review the situation in the Northern Territory ahead of next Tuesday’s border reopening.

finally coming home for a hug

Chloe Danvers hasn’t been able to hug her mum since March.

But after Premier Steven Marshall announced on Friday that double-jabbed residents from Victoria and almost all of NSW will be allowed to enter South Australia from Tuesday, without quarantining, the Adelaide-born Sydney lawyer has already booked her flights for Christmas.

Ms Danvers, 24, of Darlinghurst in Sydney, moved from Adelaide for work at the beginning of the pandemic in March last year. Chloe Danvers lives in Sydney but hasn’t been able to return home to Adelaide since February. Picture: Richard Dobson

She came back to Adelaide in late February for her sister’s wedding, before returning to NSW and living through several weeks of lockdowns.

Ms Danvers said that when she left her family last time, she knew it would be a lengthy period before she saw them again.

“When I left (Mum), I had this feeling I wouldn’t see her for a long time and I was quite upset,” she said.

Since then, she has lost her grandfather but was unable to come back to Adelaide for the funeral and has been looking forward to giving her mother, father and grandmother a hug.

“It almost makes me want to cry … I’ve had a really hard time,” Ms Danvers said.

Hopes for a tourism surge as door ajar

Travel industry figures are hoping for a surge in bookings after Premier Steven Marshall moved to clarify that all Victorians and most people from NSW can enter South Australia from Tuesday without quarantining if fully vaccinated – but they say confusion remains an issue.

“It’s great we now have more certainty, and this is likely to result in new bookings and for postponed bookings to be confirmed,” he said.

Holidays of Australia chief executive Ben Mead is also hoping for a wave of bookings but warned that opening the door to NSW and Victoria may see another close if Western Australia and the Northern Territory view SA as a “Covid state”.

“We are definitely hoping for a surge but the one uncertain thing now is whether WA and the NT will stay open to SA once we allow people in from Victoria and NSW,” he said.

Dallas Coull, who runs Taste the Barossa tour company, is hoping for a business boost but is still grappling with the toll of months of cancelled bookings, confusion and uncertainty.

He said interstate visitors may baulk at SA’s restrictions including limited capacity in venues and wearing masks.

“I really don’t know what is going to happen. It’s been such a rollercoaster and now we have a situation where I took visitors from WA on a tour and they were astounded that even in a private tour vehicle, and going into wineries, they had to wear masks,” he said.