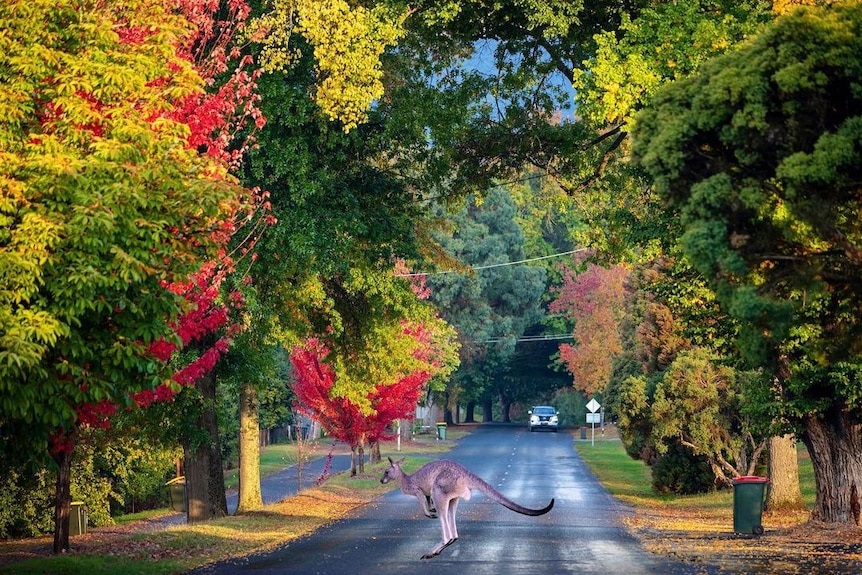 The country has been the big winner for those fleeing the big city in recent years. However, The local phone towers have been unable to deal with the explosive growth in demand for internet data.

Like many regional and coastal beauty spots around Australia, Bright has a very good problem.

It has been one of the beneficiaries of tree changers and sea changers fleeing big cities during the COVID-19 pandemic.

However, local mobile phone towers have been unable deal with the explosive growth in demand for internet data.

“It (the city) swells up. The amount of people, the amount of cars in town is unbelievable — traffic jams, all sorts of problems. Good problems.”

But what happens in tandem is the death of the internet, which relies on mobile phone towers built to cope with the small local population.

Beyond the danger that creates during natural disasters like bushfires, there’s another pressing concern: people’s ability to buy food and drink using eftpos on the weekend.

“Literally the internet slows right down … [and then] completely stops, drops out,” Mr Badrock said.

“As soon as we have any sort of busy weekend, the internet straightaway stops working and causes complete chaos.”

Contactless payments isn’t the only issue.

Since the COVID pandemic began, more hospitality businesses have moved to online ordering. People use their phones to order meals and drinks straight from the kitchen, so when the internet falters, everything falls apart.

For years, federal governments have pushed the idea of “decentralisation” — increasing the population of regional areas to take the load off bulging cities.

But apart from the forced relocation of some government departments, it hasn’t really worked.

“For a long time when we thought about regional development, we talked about the old saying, ‘Build it and they will come,'” said Helen Haines, independent member for the north-east Victorian electorate of Indi.

“Well, we haven’t built it and they have come.”

Ms Haines is frustrated that fixing connectivity in country areas — a key issue that propelled her predecessor Cathy McGowan into the formerly safe National seat in 2013 — is being left to market players more interested in populous cities and a patchwork of “blackspot” grants to fill the gaps.

“We were already struggling with telecommunications when it came to fundamental security during bushfires,” she said.

“We didn’t have sufficient mobile signal.

“During COVID, when our kids were learning from home, they were significantly disadvantaged because they didn’t have enough data, the speed wasn’t there, and people working from home on top of that is now an additional population.

“Telecommunications is an enormous issue … it really is a fundamental human right. And we have not put the resources in Australia into this in a way that’s serious.

“But we’re being drip-fed money. This is the single-biggest barrier to regional business growing and becoming more productive.”

The Bright Brewery is one of the town’s biggest employers, sitting on the river among the deciduous trees the area is famous for.

Bright’s population is just above 2,500 people. But at the height of summer, the town’s population swells by more than 10 times and 2,500 is the number of meals the brewery can pump out every day.

Welcoming that many visitors is a profitable joy, but overloaded mobile phone towers rapidly take the smile off business owners’ faces.

“The internet just slows down to the point of becomes unusable for a lot of people. It’s incredibly frustrating – a huge problem – particularly during those really busy periods”.

“The plan, broadly speaking, is for the businesses in town to take matters into our own hands”.

To keep eftpos machines working and visitors uploading happy snaps to Instagram, traders are building their own do-it-yourself wireless network for anyone to use.

Currently the signal from mobile phones goes to nearby towers. But when the population swells, the congestion means it stops working.

The plan is to build a large wi-fi network connected to the National Broadband Network to take some pressure off the towers.

“The mobile telephone tower just can’t cope with that many phones,” said Bruce Hore, secretary of the Bright Chamber of Commerce.

“I think there is market failure at the moment.

“We’ve come to realise that we can’t rely on the telecommunications providers to provide the networks that we need.”

You can see Bright’s problem repeated in popular coastal and holiday areas nationwide.

“The community-led solution might prove to be a fix.”

Mr Hore is angry with the competing providers who service the valley using different systems of towers and connections.

The broader issue is that no government has decreed what constitutes an adequate level of telecommunications service, so it’s hard to hold companies to account.

“There are no standards for coverage, capacity, resiliency, and a bushfire or flooding,” Mr Hore said.

“So, without those standards, there’s no way to actually measure what the true impact of telecommunications is in an area.”

For Mr Badrock, it’s more basic. With three stores in Victoria’s High Country and a staff of 50, he serves his local community from morning to night. But without the internet powering contactless payment terminals, he can’t.

“The minute it breaks down, we’re like, ‘Yep, sorry, you’ve got to use cash.’ No-one has cash so we literally lose customers straight away.

“It shouldn’t really be up to us to make the internet better.”