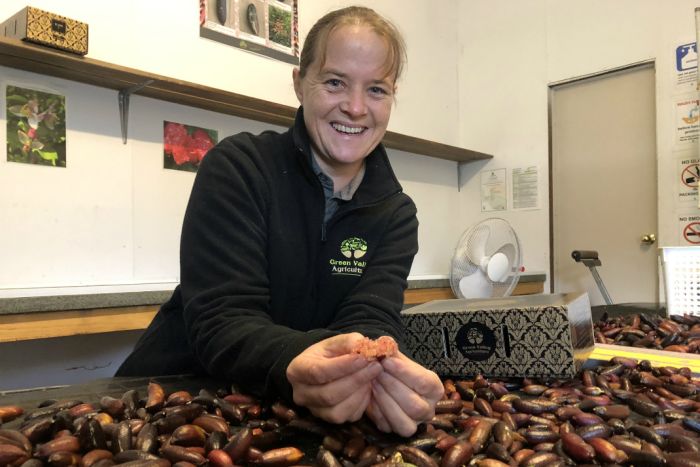 The finger lime industry had a problem of waste – until the pearls were identified as culinary jewels.

A farmer and chef have joined forces to prevent a culinary crime — by making sure delicious Australian ‘citrus caviar’ does not go to waste.

Out of the 50 kilograms of tasty native finger limes that Jade King recently picked for export to Italy, 15kg did not make first grade.

The shrubs protect their prized fruit with nasty thorns and Ms King said it was not uncommon for 10–20 per cent of the fruit to be either scratched as it grows, or odd shaped, creating a potential food waste problem.

“If we’re supplying export markets, our waste is significantly more, because you can’t actually include any fruit with scratches or marks on the outside, despite the fact that it is perfectly good inside,” she said.

“You may get odd-shaped fruit from pollination that hasn’t been totally successful.

“We’ve got others that are perfectly sized, beautiful fruit, but they’ve got a green tinge on the outside because they’ve been shaded by leaves.”

But instead of throwing out the ‘seconds’, Ms King approached the award-winning Spirit House restaurant at Yandina on the Sunshine Coast.

He described the flavour as ‘like a citrus caviar’.

“You get pops of citrus flavour, but it has still got its own unique acidity. It’s not quite as sour as your lime or lemon — there’s a lot of depth to its flavour.

“We’ve been using [Jade King’s] product consistently for the past year and a half,” Mr Tucker said.

“As soon as you cut them open, you can see the quality that you’re working with. They’re amazing to be honest.

“It’s one of those ingredients that’s a good talking point for the guests and for staff to school them about this amazing product.”

Ms King said the feedback from the chefs was overwhelmingly positive.

“They actually say to me that they think they get the better quality, because often if the fruit is scratched it has been on the tree a bit longer — it is more mature and the flavour intensifies,” she said.

“It’s really great to have that support from those chefs and they do some wonderful things and use them in ways that I wouldn’t have a clue about in their cooking and what they experiment with.”

Finger limes still grow naturally in the wild and are native to rainforests on the border ranges of south-east Queensland and northern New South Wales.

Food waste concerns are also being tackled by one of Queensland’s first farms to plant the increasingly popular native fruit.

The Lime Caviar Company developed the world’s first frozen spoonable ‘finger lime pearls’ to reduce food waste and extend the shelf life of their product from two to three weeks to up to 12 months.

Margie and Ian Douglas now export the flash frozen product to Thailand and Hong Kong from their picturesque property in the Scenic Rim.

Ms King is also investigating value-adding opportunities but, first, her focus has been on catching up with her harvest and the trees in her orchard laden with tasty fruit.