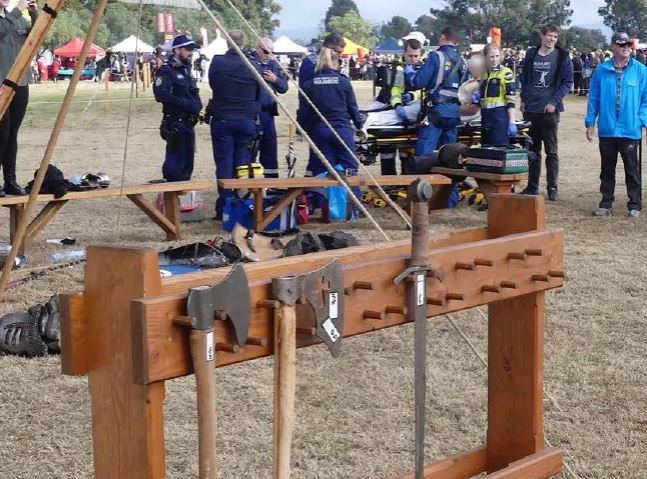 21-year-old axed in the head during medieval mock battle

A 21-year-old has suffered a nasty blow to the head with an axe during a mock battle at the Winterfest Sydney Medieval Fair.

A man has been hospitalised after he suffered a blow to the head with an axe during a medieval battle re-enactment in the Hawkesbury region, near Sydney.

The 21-year-old was jousting in a mock battle at the Winterfest Sydney Medieval Fair at the Hawkesbury Showground in Clarendon this morning when an axe penetrated his helmet.

One witness described the weapon as a “sword” on social media.

The man was airlifted to hospital.

‘As soon as we got to Winterfest a dude had to get airlifted out because the back of his neck got slashed with a sword.’

Hundred of spectators were watching when the man was struck with the axe before 11am, a CareFlight helicopter spokesman told AAP.

The man had reportedly travelled from Victoria to participate.

Two NSW Ambulance crews and a CareFlight team treated the man, who was conscious but vomiting, an ambulance spokesman said. “He had a gash on the back of his head.”

NSW Police told 9News the axe was a replica, and had ricocheted during the accident.

“The axe appears to have deflected off the 21-year-old’s shoulders and gone underneath his helmet where he sustained a large cut to the back of his head.”

He was airlifted to Westmead Hospital in a serious but stable condition.

CareFlight responded to the incident.