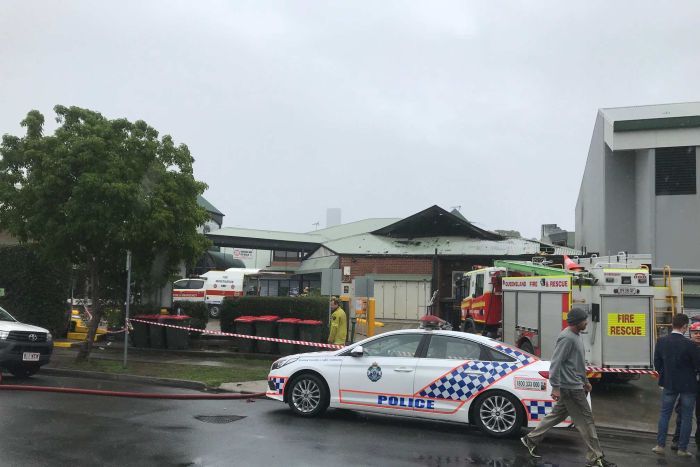 A Queensland deli has gone up in flames. The family business owners have vowed to rebuild

Space to play or pause, M to mute, left and right arrows to seek, up and down arrows for volume.

The owners of the much-loved New Farm Deli in Brisbane have vowed to rebuild after a fire destroyed their 40-year-old business overnight.

It took more than 30 firefighters to control the blaze that started in the kitchen and quickly spread to the roof of the Merthyr Road business just after midnight.

“Unfortunately one of the knobs to one of the burners on top of the cooktop has been bumped on or left on,” he said.

He said the fire ignited some “combustible materials” next to the burner which “sent the fire up into the rangehood” and the roof.

“They’ll need to rebuild the entire cafe itself. The roof is completely gone, so that’ll mean a complete new rebuild of the cafe area.”

New Farm Deli has been operating for more than 40 years, offering traditional Italian cheeses, meats and other delicacies and is considered a local institution.

Co-owner Maria Anello said her daughter was alerted to the fire by a former staff member who lived near the deli.

“It’s like a bomb scene. It’s so confronting … it’s devastation,” she said.

“It’s got to be demolished … the roof is just about to cave in. The fire has contained itself to the roof, but everything else is smoke and water damaged.

“We’ve got four children. They were all born in the business and grown up in the business. When we think about the deli and our lives, it’s our total life.”

Ms Anello and her husband Vince are insured but they are concerned for the future of their 55 employees.

“Our biggest worry is to look after them and make sure we can retain them and keep them financial until our re-build,” she said.

She was unsure how long it would take before they could re-open, but hoped it would be a matter of months or even weeks.

Regular customer Patrick Staunton said he was sad to see it in ruins, but was hopeful it would be up and running again soon.

“They’ll rebuild, the community will come together and we’ll all be back getting the best coffee in Brisbane,” he said.

Hundreds of locals have reached out to the owners on Facebook to offer their support.

“I’m so sorry,” she wrote on the deli’s Facebook page.

“I frequently have breakfast on the weekends at the New Farm Deli, I’ve been going there for years, I hope you rebuild so you can continue with the tradition.”

The business is Brisbane’s oldest Italian deli, initially beginning as a delicatessen and extending several years later to include a cafe.

In 1996 it became the first “deli-cafe” in Queensland to win Cafe of the Year, and it has since gone on to win other awards.