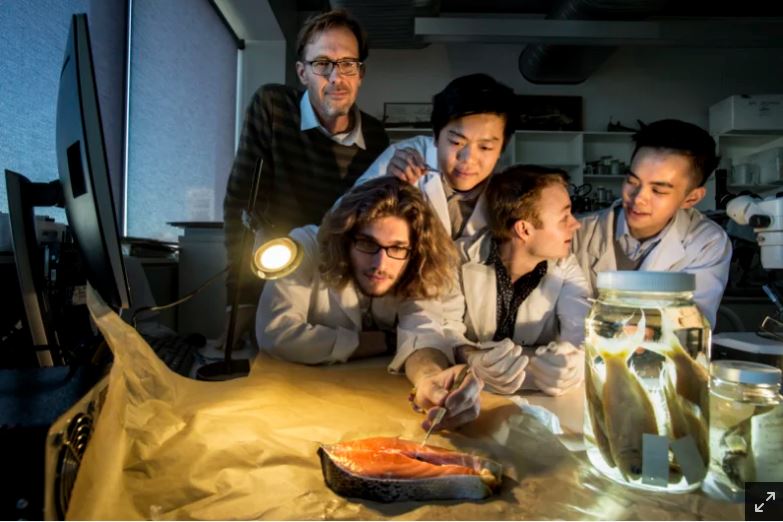 Nearly 10 per cent of fish species sold by Sydney retailers are not what they claim to be, a group of high school students has found in the first local study of its kind.

The investigation of two retailers at the Sydney Fish Market and one fish retailer in the Sydney CBD found that two of the mislabelled samples were actually an entirely different family of fish to that listed.

“Some of the fish, you can’t just look at and tell what they are,” said Michael Sacks, 20, who was one of 12 Sydney Grammar School students involved in the study, which was conducted in 2015 and 2016.

“I previously had a trust of the label on fish but this has made me realise that’s not always the case,” said Michael, who is now studying physics and maths at the University of Sydney.

Fish being sold as “bream” was identified as Jackass Morwong, a species listed as being overfished by the NSW Department of Primary Industries.

“Flathead” was identified as being either a Red Gurnard Spiny Red Gurnard, the Sydney Grammar School students found.

Yet another was being sold as Blue Warehou but was actually Silver Warehou, considered to be of lower quality for eating, according to the researchers.

“I was working with one of [a friend’s] samples and we found it was mislabelled and one of the first things that came up in the Google search for the fish that was actually being sold was that it was endangered,” said Michael O’Dea, 20, who is now studying genetics and artificial intelligence at UNSW.

The study also found that 22 per cent of the fish labels did not comply with the voluntary Australian Fish Names Standard by providing insufficient information to identify the correct species of fish, using obsolete names or terms that encompass multiple species or misspelt names.

Andrew Mitchell, a senior research scientist at the Australian Museum who led the study, said fish mislabelling is a major consumer issue.

“Although the mislabelling rate we found compared favourably with mislabelling globally, which is as high as 30 per cent, we found that a high number of samples didn’t comply with the naming standard,” Dr Mitchell said.

“Commonly one finds a cheaper species mislabelled as a more expensive one. This is something that’s absolutely vital for consumer choices.”

Dr Mitchell said he planned to expand the study to include fish sold in restaurants.

The study looked at 68 samples of fish and was published in PeerJ last month.

This is the second such DNA barcode-based survey to be conducted in Australia and the first in Sydney.

The students said being involved while they were in high school showed them the relevance of the theory they were studying in science classes.

Patrick Wan, 20, who is now studying information systems at UNSW said: “In high school you just follow the syllabus but doing things that involved daily things like buying fish made me think about how this applies to our lives.”

“Getting hands on with all that tech, PCR machines, high-level sequencing, was also great when the most high school labs have is a bunsen burner,” he said.

“It showed us what science actually is and gave me an idea of whether it was something I wanted to go into in university.”