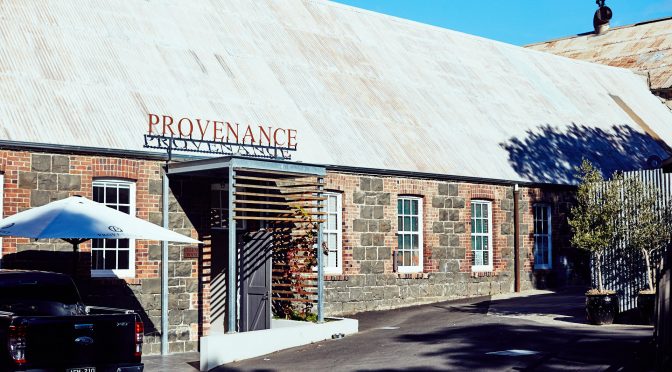 Starting life as a paper making press now being used as a feature dinning room, Provenance wines 1870’s bluestone building opened its doors just prior to covid after the completion of an 18 month refurbishment, now open for lunch on friday – sunday the resturant is offering a menu of fan favourites and an impressive vegetarian options.

LIKE countless other wineries around the world, Provenance Wines is steeped in tradition. But in this case, the tradition has not so much been grown as constructed.

Instead of being surrounded by hectares of historic grape vines, Provenance is part of the Old Paper Mills creative precinct wedged up against the banks of the Barwon River in Fyansford.

The 150-tonne winery processes grapes from Provenance’s eight vineyards that stretch from Macedon to Henty, four of which are in the Geelong region. It’s located next to a long bluestone building built in the 1870s to house a paper making press powered by water from the river.

A lithograph of the room shows the machinery being operated by David Syme, founder of The Age newspaper.

The room serves as the winery’s dining room, its robust 19th century industrial interior now softened by the addition last December of a 25sq m mural by acclaimed street artist Rone. His delicate muse rests atop one wall at the end of the room.

Provenance chief executive Scott Ireland said when the winery opened in 2016 it was always with a view to having food around the wines. After the initial 18-month refurbishment, an area was set aside as a kitchen, which opened in August 2019 and was just hitting its stride when Covid arrived on the scene.

“We were just getting on our feet, to be honest. It was looking really good then Covid came along and that was it. Shut the doors,” Scott says.

When they got around to finally reopening this year, Covid had forced Provenance’s hand in other ways too. Their head chef had moved on, as had former sous chef Nathan McIver. But Nathan agreed to return to run the kitchen and the result is a menu that Scott describes as modern Australian with a leaning towards French influences.

It’s on show at lunch Friday-Sunday and dinner on Saturday.

Nathan’s menu includes vegetarian and vegan options and prior to the state’s latest lockdown he was finalising a pescetarian menu. The focus is on keeping it all quite fresh and the “quite flexible” menu changes about once a month.

The nod towards indigenous ingredients can be seen in such dishes as the barbecued kangaroo and macadamia cream with puffed buckwheat and aniseed myrtle dukkah; the fire pit beetroot and rhubarb with roast kelp, macadamia and crip saltbush; or smoked passionfruit, wattle seed custard and eucalyptus meringue.

A truly homegrown dish is the forest mushroom tartlet, which has its origins in the pine mushrooms that Scott collected from the forest near his vineyard at Scotsburn.

Nathan says the tartlet is among a few “fan favourites” at the moment, and in keeping with his own personal preference.

“I’m leaning more towards vegetarian dishes these days, I can’t tell you why that is,” Nathan says, adding that the feedback for the mushroom tartlet in particular is “really incredible”. “That’s been a nice surprise on the current menu.”