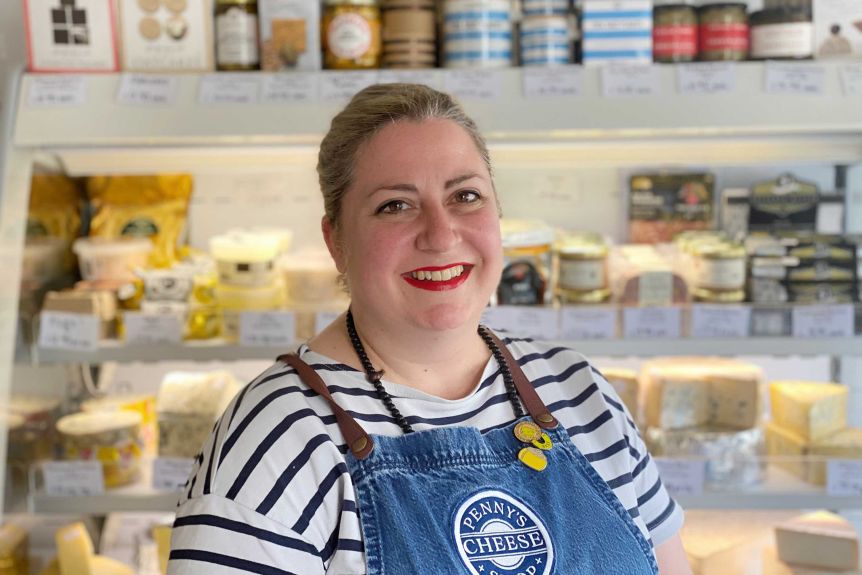 For artisan cheesemaker Donovan Jacka the good weather and coronavirus pandemic have laid the foundations for an oddly perfect season on his goat farm in Victoria’s north-east.

“Spring is our highest production time of the year. It is when all of the baby goats are born, and because of that all of the mum goats have got udders full of beautiful milk that we turn into cheese,” he said.

“Demand is excellent. We have phone calls from people all across the country who are really keen to get some cheese in their isolated bubbles.”

One of Mr Jacka’s hard cheeses has been maturing through two crises now — the summer’s bushfires and the COVID-19 pandemic.

Today he is milking goats to produce soft cheese to add to his stockpile.

The cheese will not last long, soon to be snapped up by customers who have quickly shifted their buying habits from in-person to the internet.

Mr Jacka used to sell 70 per cent of his cheese wholesale to restaurants, but the closure of many due to the pandemic, particularly in Victoria, turned that revenue tap off overnight, leaving online retail his main option.

“Our wholesale market has gone completely and now all of our cheese is sold directly to customers,” he said.

Melbourne cheesemonger Matt Steele, the owner of online retailer Cornelius Cheese, said since the outset of the pandemic, sales have grown month on month.

Every day is quite literally like Christmas for him.

“We have been at the same level of sales as we were at Christmas in 2019, every month. It is not waning at all,” he said.

“It is primarily because people are gifting cheese to each other, people who can’t see each other who are overseas or interstate, or even now people in lockdown across Melbourne.”

A taste of the old days

The surging demand for Australian-made artisan cheese is also being driven by people cooped up at home desperate to relive past travels to Europe, according to Sydney cheesemonger Penny Lawson.

“People are harking back to international adventures they may have had before, and now people are learning how to travel a little bit through cheese,” she said.

Ms Lawson said with many restaurants either closed or with limited seating capacity, people are opting to cook fine food at home and are splurging on luxury food items with the money they save.

She said in a year of dual crises, Australians are directing their pay cheques to support local producers, another of the main factors driving demand for locally-made cheese.

“Even post bushfires, people are more interested in the domestic product, our Australian cheesemakers, and they are just wanting to put their dollar into our own homegrown producers,” she said.

“Our discretionary spending has changed, our dollar for entertainment has shifted in where we can be spending our money.

“While restaurants have unfortunately taken a big hit, people are dining more at home and being experimental.”

Mr Steele thinks even those who do not usually travel are buying cheese to create experiences with food as they search out simple pleasures at a time when big plans are on hold.

A recent spike in the cost of imported cheese from Europe is the other major factor underpinning the shift and is helping to give local producers a rare competitive edge.

The lack of international flights coming into the country has pushed up the cost of imported cheese by three to four times, according to importers and mongers.

Hard cheeses, such as Parmesan and Romano, can still be shipped and take about a month to arrive in Australia, but soft cheeses like Brie and Camembert need to arrive quickly by plane.

“In the worst stages of COVID-19, up to 95 per cent of passenger flights weren’t flying. It is harder to move cheese on the ground in Europe, it is harder to move it in the air to Australia, and the supply chains have become longer,” Mr Steele said.

He said the wholesale price of imported cheese from Europe has gone up $11 a kilogram.

At the retail level that means shoppers pay an extra $20 to $30/kg.

“European cheeses were on parity with Australian cheeses, but now we are seeing them become more expensive, especially air-freighted cheese.”

Take Roquefort from France, for example. It is the only soft cheese made from raw sheep milk permitted for import into Australia.

“This is something that we have to pass on. The importer is passing it on to me as a cheesemonger and I am trying to be reasonable, but then I also have to try to cover my costs as a small business owner,” she said.

To take the pressure off, cheesemongers are sourcing more stock from local producers, but even that is getting harder to find according to Ms Lawson.

“I have already struggled with some of the cheeses that I have always stocked that I haven’t been able to access recently, but I think that is a good problem to have to be able to have cheesemakers selling all of their cheese,” she said.

The predicament for cheesemongers is a possibility for cheesemakers like Chris Vogel from Denmark in Western Australia’s Great Southern region.

The dairy farmer has been making European alpine-inspired cheese for a decade, specialising in Swiss varieties.

Prior to the pandemic he was making cheese five days a week, but now he is producing all seven days.

“We have noticed an increase certainly in production for us, and demand,” he said.

“There is so many fantastic cheesemakers now between the west and the east coast that consumers just don’t need to go abroad any more.”

Artisan cheesemakers in Australia have traditionally struggled to compete on price against European ones because the dairy industry there is heavily subsidised.

“That is a very difficult thing for us, because those [European] governments are pretty much doing a direct subsidy, in some cases, to the dairy farm, who is then able to produce a cheaper milk for the cheesemaker, and then from there it is a cheap cheese to export,” Mr Vogel said.

Cheesemonger Matt Steel said Australian producers do not get that level of support.

“I have heard talk that up to 80 per cent of the price of some European cheese is being paid in subsidy to bring the wholesale price of that cheese down so that it is competitive on a global scale,” he said.

Making more cheese locally not only supports Australian cheesemakers, but also the entire supply chain — including the dairy farmers that produce the milk and the grain growers that supply the feed for livestock.

“The idea that we can’t produce good cheese is just ridiculous, we are really up there.”

The question now for cheesemakers and mongers is if the love affair with locally-made artisan cheese will last beyond the pandemic, when air freight returns to normal and prices for European imports fall.

“I think we cheesemakers will fare a lot better than we had before because people are now trying out our product, but it is difficult to say what will happen when COVID ends,” Mr Vogel said.

Mr Jacka said he hopes over the course of the pandemic Australians will develop a taste of the local product that will linger in their mouths and solidify the demand for Australian-made cheese in a way similar to that of Australian-made wine.

“What the reduction in imports has done has made people open their eyes and ask, in the long run, ‘where am I going to get my delicious cheese from?'” he said.

“Once people start tasting the Australian product and seeing what amazing product we have in Australia it will follow exactly what the winemaking industry did in the 1980s and 1990s.”

The wine industry comparison is one cheesemonger Penny Lawson agrees with, and not just because the two pair well together on a fine dining table.

“Australia’s cheese industry is about 20 years behind the Australian wine industry,” she said.

“We have certainly seen a shift from people wanting to consume internationally-produced wines — and now cheeses — to now shifting towards experimenting with more of the Australian product we are making here.”