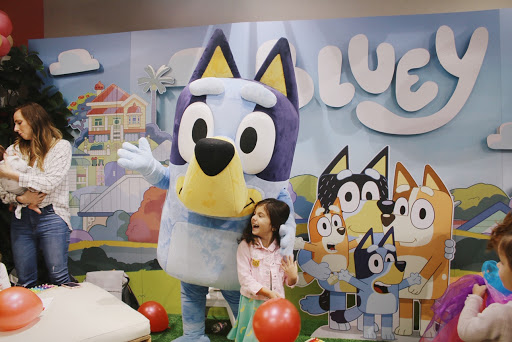 The Australian cultural export – an animated series of an Australian Cattle Dog family living in a Queenslander – is taking the world by storm during a streaming pandemic. Bluey is the heartwarming kids’ comedy series featuring a family of blue and red cattle dogs that resounds with adults for its plotlines, positive messages and genuinely funny dialogue, and for it featuring archetypally Australian aspects of life, like summer Christmases and Australian flora and fauna. Now Bluey has made it to the stage despite Covid.

From The Guardian Australia, 16th December 2020

In just two years Bluey, the animated blue heeler puppy, has rounded up more than 100 episodes on the ABC, millions of streams, thousands of book sales and made devoted fans out of children and parents alike. Now a team of theatre-makers from around the country face the tall order of translating the Emmy-winning cartoon from Ludo Studio’s warm, playful heart to stages from Alice Springs to the Sydney Opera House.

“It just nails this family dynamic which I think so many people can relate to – it’s a celebration of family but in a way that feels very contemporary and recognisable, says the director of Bluey’s Big Play, Rosemary Myers. “That’s at the heart of it.”

As artistic director of Adelaide’s young audience-focused Windmill Theatre Co, Myers has experience adapting cherished kids’ characters, with the company’s 10th anniversary season of Ted Prior’s Grug among the first shows to return to local theatres in October. Back in March Myers was in Melbourne developing Bluey’s Big Play in earnest when the pandemic hit, forcing the production – like the rest of Australia’s hitherto thriving children’s theatre industry – to pack up and go home.

“Windmill had our biggest year of touring ever – 52 towns and cities across the world, over 350 shows – cancelled,” Myers says. “At that time we had a company of actors touring in the US, five weeks into a 12-week tour, and we made the decision pretty much overnight to get them home.”

The isolation of 2020 has only intensified Bluey’s appeal. With its fortuitously timed second season hitting screens in mid-March, the show offered lockdown-weary parents a brief respite – for seven minutes at a time. But its spirit of gently progressive parenting and imaginative – and, ironically, often screen-free – play has also become a helpful source of playtime inspiration and parenting goals for families finding themselves housebound like never before.

“Sometimes as a parent I feel put to shame by Bluey because the parents are so beautifully playful all the time – sometimes I just lie on the floor and say, ‘I can’t keep up,’” says Anna Steen, an actor.

She’s one of a team of performers who will bring the heeler family to life via large-scale puppets, working to a fresh story by the Bluey creator, Joe Brumm, with a score by the composer Joff Bush and the pre-recorded voices of the TV series’ cast (from dad rocker Dave McCormack to the inimitable, sing-song patter of the human children who anonymously voice the puppies).

With two children aged six and four – the same age as Bluey and her sister, Bingo – Steen appreciates the charm of Bluey, and the big expectations of its audience.

“What that family does magically is embrace unstructured play; they allow everyday, ordinary things in life – like getting out the door and into the car – to be extraordinary by allowing the really beautiful imaginations of young people to be released, rather than squashing them down. In Bluey they really embrace all of those moments, they make their ordinary lives quite magical – but when kids are that little, that time with them is magic.”

In October South Australia’s low Covid numbers saw production restart in Adelaide. Sets were being built by State Theatre Company South Australia, a local cast was hired, preview dates were booked and border travel exemptions were provided for a handful of key talent from Melbourne and Brisbane. Then Adelaide’s November outbreak prompted the entire production up stumps once again for Canberra, before the state’s hard but ultimately shortlived shutdown set in.

“It was all fairly swift,” Steen says of the latest move. “But we’ve been able to bunker down and really focus on making the show; it’s quite helpful to sort of be living in a bubble, because it’s a big show. All we do is rehearse and build, eat and sleep, rinse and repeat.”

With the coordination of multiple state governments, BBC Studios and a $1.9m federal Rise grant backing its return, there’s a lot riding on the play’s success, from cast and crew employment and theatre box offices to the soft diplomacy potential of such a distinctly Australian production being tour-ready when international borders reopen. 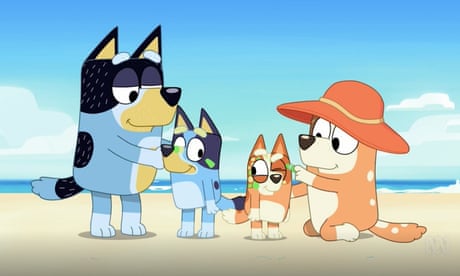 But both Myers and Steen know the show has no bigger responsibility than to its young audience – not only to faithfully translate beloved characters and stories, but to restart a generation’s relationship with live performance after a year largely spent at home, waiting for anxious parents to switch off the morning’s press conference so playtime can resume.

“It’s the sunshine after the rain this year, and everyone wants the show to get up and going,” Steen says. “It’s going to make so many little hearts so full.”

Myers says: “The show is a celebration of play, and obviously theatre is playing. In the theatre, you’re making everything up, it’s happening live before an audience, and that’s how this family does play around the house.

“It is about imagination, and that’s what the theatre demands from you.”

• Bluey’s Big Play opens at Canberra Theatre Centre from 18 December and the Playhouse, Qpac from 23 December before touring nationally throughout 2021