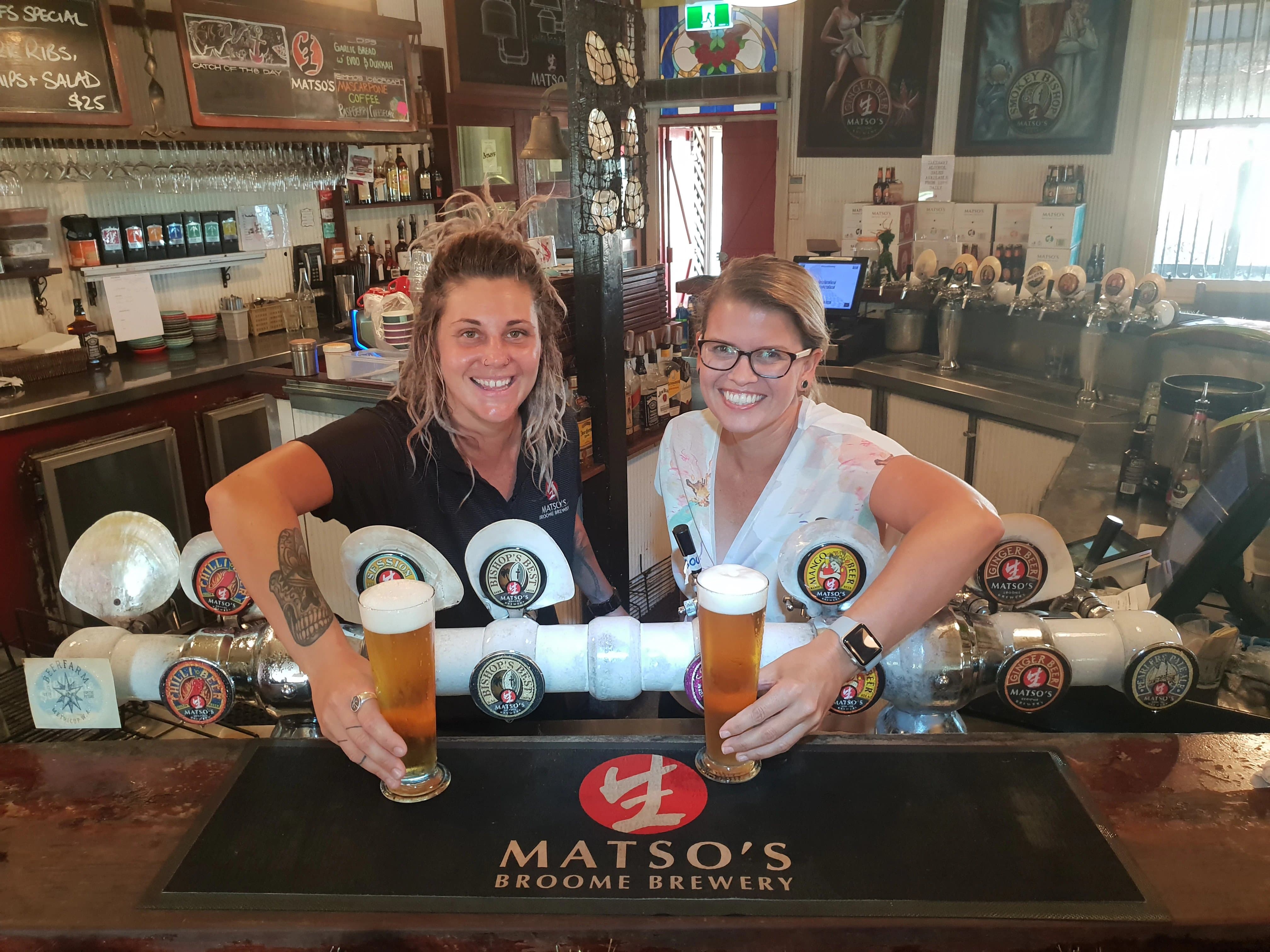 With WA-folk unable to travel overseas and itinerant workers unable to fill low-paid positions, regional destinations, like Kalbarri on WA’s Coral Coast have invested heavily in attractions like the Murchison  Gorge Skywalk. After opening only in June 2020, the attraction brought an additional 30% year on year (for August alone) visition, hosting a whopping 12,590 visitors without the benefit of international or interstate tourism.

The problem is, regional towns are overflowing with keen visitors and there’s no-one to serve them, partly because there’s nowhere to stay, as the ABC and SBS stories below outline. Affordable regional accommodation has always been a problem in Australian Domestic Tourism, but whilst mining workers needing accom just drive prices up, hospitality workers just don’t come.

Similarly, the WA state government is offering a ‘Low Cost, Local Courses’ program through the state’s TAFE, but the hospitality skills workers need aren’t available online, or they’re not available in the right places.

The WA Government announced they would build ‘state of the art’ hospitality infrastructure (no delivery dates proposed)- whereas most kitchens across the state have dicky ovens, steel benchtops and the only real requirements from trainees? Cookery, coordination and food hygiene skills. 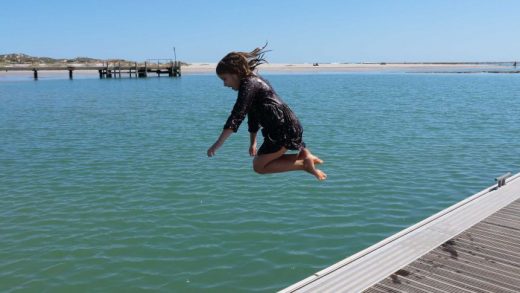 A family-friendly lifestyle attracted the Hootons to Kalbarri, but a lack of housing is forcing them out.(ABC Midwest and Wheatbelt: Cecile O’Connor)
West Australians are heeding the State Government’s call to wander out yonder to stimulate regional business, but it has come at a cost.

Holiday accommodation in the Midwest coastal town of Kalbarri, 570 kilometres north of Perth, has been booked out for months thanks to a rush of people exploring their own state while interstate and international tourism has been shut off because of the COVID-19 pandemic.

Business owners and workers, however, say the flipside of the boom is a lack of housing for people in the service industries.

They are being forced to cut back services, and at least one is considering closing because of a lack of housing for themselves and staff to rent.

The owners of a successful family cleaning business which services local accommodation providers say they may be forced to leave or move into a caravan with three of their children, because they cannot find a place to live.

Amanda and Owen Hooton said they and their children have had to leave their rental home but are struggling to find an alternative.

“The turnover for our business in two months has been amazing [but] we have got nowhere to live,” Mrs Hooton said.

“It is really hard, no sleep. It is the stress.”

Her husband Owen said the holiday market has squeezed out long-term renters.

“It is that busy here with the holiday market that there are no private rentals available,” Mr Hooton said.

“For people that want to come here and work there is nothing here.”

Customers to serve, but no staff

“It has just been a crazy, crazy year. From highs to absolute lows,” she said.

“From being shut down, no one here, scrambling ‘how we are going to survive’, to reopening and then scrambling as to how we can get enough produce in to feed everyone.” 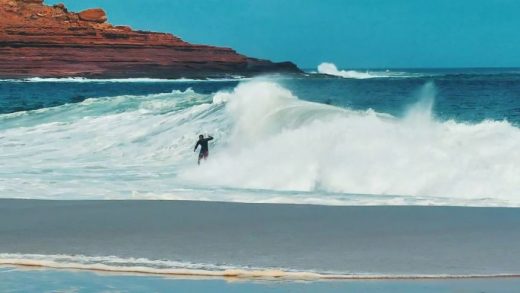 A lack of tourists was hurting communities like Kalbarri in April.

Her seafood restaurant is advertising for chefs and wait staff but she said it is difficult when they have nowhere to stay apart from a bed in a mixed dormitory at a backpackers.

“Since reopening I have been trying to find accommodation,” Ms Finlay said.

“I have rented one place in town, a two bedroom place that I have three of my workers in, and I have just managed to secure an unfurnished four bedroom house which I have only got for three months.

She said a local pilot and an education assistant, working second jobs, were among her wait staff.

But the accommodation shortage was making it hard to attract staff from further afield. 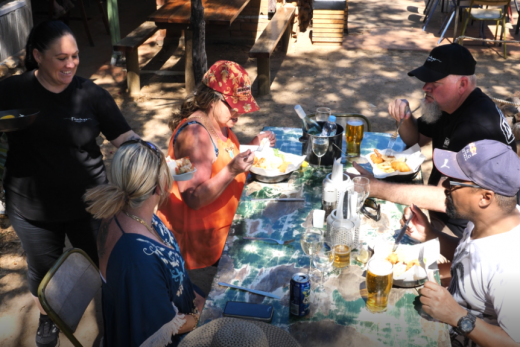 Finlays restaurant is struggling to find staff because they have nowhere to live in the booming tourist town. (ABC Midwest and Wheatbelt: Cecile O’Connor)

She said the restaurant has the customers to open seven days but is currently only open five evenings and one lunch because of the lack of workers.

“The risk is we cannot provide the service that we want to,” Ms Finlay said.

“We cannot provide the level, the quality, and it may impact badly on Kalbarri.”

A social media post by real estate agency Ray White in Kalbarri pleaded for home owners to rent their properties to long-term tenants.

“Another cry for housing help,” it read.

It listed a description of tenants looking for homes and ended with “this is only the tip of the iceberg”.

Kalbarri has benefited from the newly opened Skywalk over the Murchison River Gorge.

Figures from the visitor centre show 12,590 people went into the centre this August — 30 per cent more than the same time last year.

A spokesman for the Northampton Shire Council, which takes in Kalbarri, said the council would consider any proposal for worker accommodation but was not in a position to fund a development.

Border closures have not stopped tourists flooding into Western Australia’s regions but some businesses are struggling to meet demand as staff are locked-out of the state.

Melissa Finlay runs a restaurant in Kalbarri on WA’s Coral Coast, which is known for warm weather, beautiful beaches and offering a window into the outback.

“We’ve been fully booked since June, all the accommodation is fully booked in town as well, it is absolutely awesome to see so many West Australians holidaying within WA,” she said. 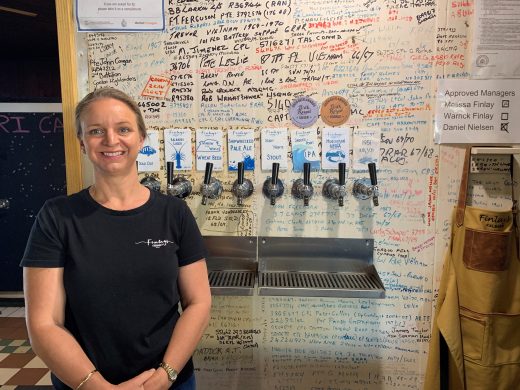 But despite the idyllic location, Ms Finlay said she cannot find any willing workers.

“At the moment we are looking for a couple of chefs, a couple of cooks, kitchen hands, front of house, wait staff, cleaners, pretty much all of the above,” she said.

“We have been looking for 12 weeks now… and we just haven’t had any applications.” 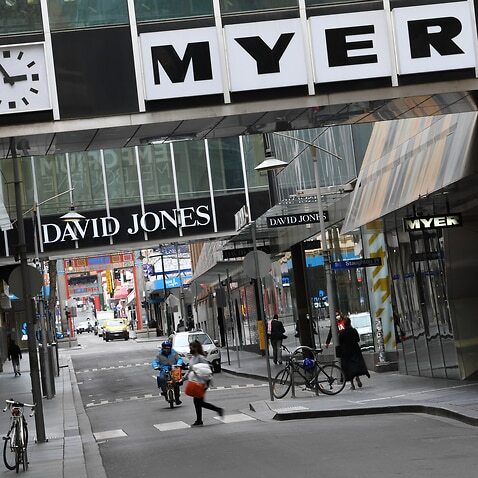 The lack of workers means Ms Finlay cannot capitalise on the booming local tourism industry as she does not have the staff to open seven days a week.

In fact, she can only manage 50 per cent of the trade she would usually do during peak season.

“With the numbers in town at the moment we would love to be open seven days a week for lunch and dinner,” she said.

“We’re restricted to five nights a week and only one day for lunch… we are turning away a lot of people because we can’t fit them in.” 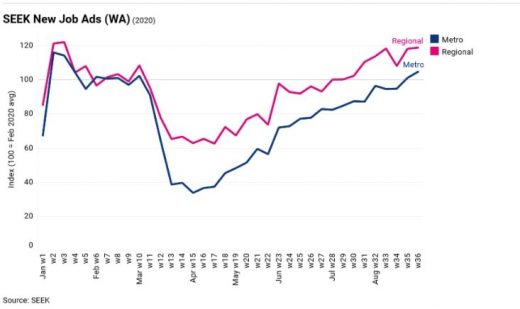 Job advertisement data provided by employment agency Seek shows demand for workers in regional areas is back to pre-pandemic levels in WA. Supplied.

This story resonates with Dannielle Hart, who runs an accommodation service and brewery in Broome.

She is currently looking for two dozen workers to fill positions usually taken by backpackers and Pacific workers.

“We only have a short season here in Broome and we really need to capitalise on what we can at the moment,” said Ms Hart.

A lack of regional workers is a trend throughout Australia as bush communities are recovering faster from the COVID-19 induced downturn than metro centres. 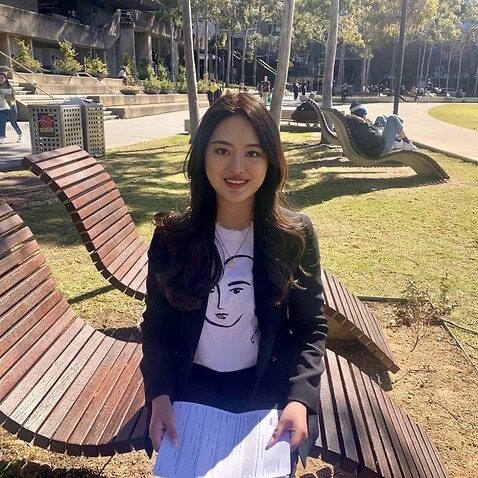 Job advertisement data provided by employment marketplace Seek shows demand for workers in regional areas is back to pre-pandemic levels in all states and territories except for Victoria.

But, in metro areas job ads are down 34 percent since the start of the pandemic. 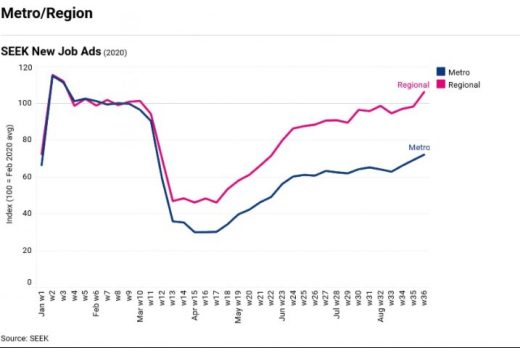 In metro areas, job ads are down 34 percent since the start of the pandemic. Supplied.

“The one biggest driver is professional services, this makes up a very big percentage of the jobs in metro areas,” said Seek’s Stephen Tuffley.

“By professional services, we are looking at things like lawyers, accountants, IT, marketing, HR, those sorts of roles have really taken a hit in metro areas, where as in regional areas they have taken a hit, but there is a much lower percentage of those sort of jobs.”

Roadblocks to a tree change
The unemployment rate is sitting at 8.3 percent in Western Australia, which is the second highest in the country.

To encourage job seekers to head out into the regions the state government recently launched the Work and Wander campaign.

Business groups are unsure the campaign will replace the workforce usually sourced from seasonal workers, especially with the current welfare payments. 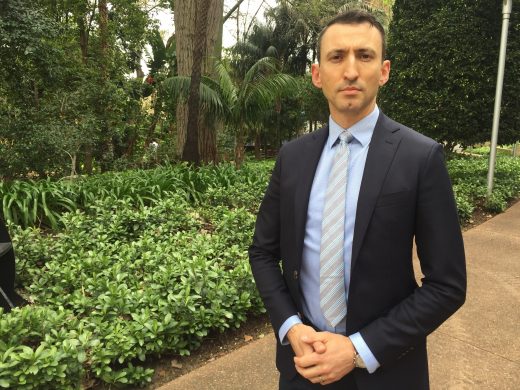 Aaron Morey is the chief economist for the CCIWA. Supplied.

“It is really important that both levels of government continue to monitor their policy settings to make sure there are strong incentives for people to take up those great employment opportunities in the regions.”

For Dannielle Hart in Broome, there is nowhere she would rather be than in regional Australia.

“It’s a great place to work, the weather is beautiful, it is really a fun town to be in,” she said.