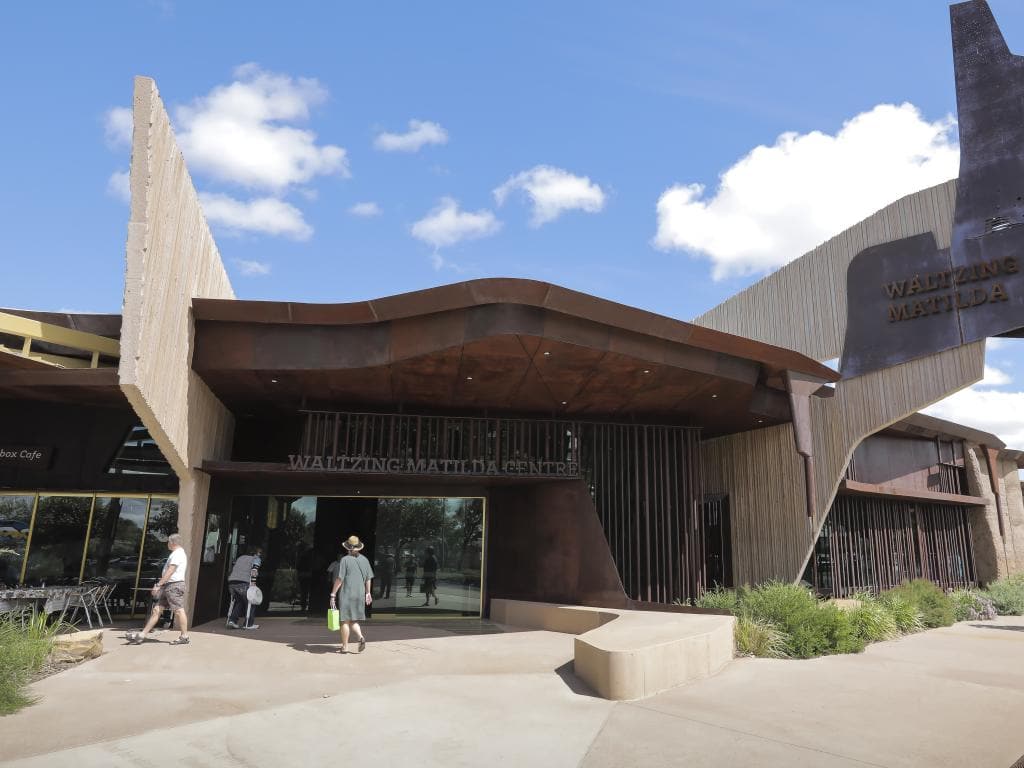 A lot of outback towns struggle with novelty, but Winton QLD is not one of them – and they’re shouting their attractions from the rooftops.

Is a trip to the Outback in the stars?

Big skies filled with stars, a dinosaur stampede, a nostalgic trip to an open air cinema and, if you time it right, “dunny races” are waiting for you in Winton, in Queensland’s Outback.

One of the simple joys of hitting the road and heading to the Outback is gazing into the carnival of stars in the night sky. Simple, yet mind-blowing. Just lie back and watch the cosmic mix of dust and gas and stars twinkle and flicker on the inky canvas and ponder life, the universe and everything.

The wide, open sky just outside Winton, 1300 km north-west of Brisbane, is perfect for stargazing. But for a twist, take a wander along the main drag, Elderslie Street, turn onto Cobb Lane, step beyond the corrugated iron doors and enter the 101-year-old Royal Theatre, one of the few original open air cinemas remaining in the country.

This little piece of history has spluttered and stopped and started like an old film over the past few decades but it is being revitalised by a small group of enthusiasts, led by Luke Miller, 37. Every Wednesday between April and October, Miller pops on the popcorn machine, powers up the 16 mm and 35 mm projectors and invites locals and tourists to relive the wonder of watching an old-time movie under the stars in canvas seats.

Actually, they’re made of a hardy PVC material now, a gift last year from the Vision Splendid Outback Film Festival which runs in Winton every winter. Winton is becoming a popular place for filmmaking, with movies such as The Proposition, Mystery Road and Goldstone making the most of the vast plains, majestic jump-ups (mesas) and rugged beauty of the region.

You won’t see too many modern films at the Royal, though. The budget of the newly formed Winton Movies Inc doesn’t run to paying for screening rights so it’s all about nostalgia – and the crowd love it.

Miller starts the night with some advertising for local stores and businesses straight from the 1960s, shown using a carbon arc projector that is such old technology, the 19th century fathers of film, the Lumiere brothers, would have known how to operate it. Miller not only sets up the welding rods for the carbon arc but manually changes the slides and admits he gets it wrong at times.

“I can’t see the screen and when I put them in they have to be around the wrong way and upside down to be able to project onto the screen,” says Miller, who moved to Winton in January last year. “Sometimes I mess up. I tell the audience to yell out or boo or cheer if it’s wrong. It’s a lot of fun.”

At interval, everyone is invited into the command centre to see the equipment and learn how it works. The entrance is via a small room bedecked with film posters from the 50s and 60s, classics such as Marilyn Monroe in Some Like it Hot, and Paul Newman in Hud, also known as “The man with the Barbed-Wire Soul.” Roller skates are dotted about; up the front, near the screen is a tiny rink, put in to try and boost ailing numbers in the 1970s after television started to bite.

With everyone back in their seats and snuggled under blankets, Miller cranks up the 16mm and puts on some Cinetone News, maybe some Bugs Bunny cartoons, and follows it with a feature film on the 35mm. Perhaps a bit of Three Stooges. All for $8 for adults and $5 for kids.

“We recreate coming to the cinema in the 1960s,” says Miller. “I could see the magic in it. It’s living history. I think that’s the charm of Winton, why tourists come out here.”

Come spring, tourists will be arriving in droves – some with thunderboxes in tow. The Australian Dunny Derby is on again, a highlight of the five-day Outback Festival that starts on Tuesday September 24. It’s a hilarious spectacle as wildly decorated loos are pushed and pulled through obstacles by teams. Or watch those vying for the title of strong man and woman lug farming equipment and push 4WDs, while strong kids toss their swags. There’ll be music, bush poetry, a three-course meal under the stars with chef Matt Golinski and a Grand Parade.

Motel vacancies will be scarce in the town of 870 but Club Paterson Tent City is a great alternative, with tents and bathroom facilities set up at St Patricks School in Oondooroo Street. That’s the same street you’ll find the Winton Club, the place the first board meeting of Qantas was held in 1921.

There’s more history at the Waltzing Matilda Centre, a celebration of Australia’s unofficial anthem which was written in the district in 1895 by Andrew Barton “Banjo” Paterson and Christina MacPherson. If it’s natural history you’re after, take a seat at the eclectic bar at the Tattersalls Hotel, and get talking to publican Paul Neilsen about the elusive, critically endangered, night parrot.

Or make the 20-minute drive to the Australian Age of Dinosaurs Museum where the extinct are brought to life. Located high on a jump-up with spectacular views across the outback plains, the 10-year-old rust-coloured museum cleverly blends into its surrounds and honours the animals that walked this region that was lush pine forest 95 million years ago.

In the fossil preparation room, workers chip and dust away earth and rock to reveal the bones of sauropods and theropods. It’s painstaking but fascinating work and tourists can organise to try it themselves, with a two-day “prep-a-dino” experience. If you really get hooked, there’s a 10-day course to become an honorary technician. If you get hungry, there’s a café.

The museum’s newest attraction is the $1.3 million Dinosaur Canyon, which has five outdoor dinosaur galleries recreating scenes of life in the Cretaceous period.Tourists are driven in an open-air shuttle to the top of a cliff and then guided on an easy walk (it is wheelchair accessible) into a gorge where pterosaurs sit on rocks and crocodile-like armoured dinosaurs bask under trees. In one gallery, life-size dinosaur replicas show the terror of a dinosaur stampede as 24 small dinosaurs flee a five-metre long theropod, a scene based on the footprints found at the Dinosaur Stamped National Monument, 110km south-west of Winton.

The gallery is phase one of plans for a 6000 sq metre Museum of Natural History to be located on this spectacular part of the 1400 ha property. It’s a monumental undertaking by the Australian Age of Dinosaurs team, led by grazier David Elliott and his wife Judy ever since David discovered a femur of a sauropod while out mustering in 1999.

Amid plans for the museum to become an international dinosaur research centre with world-class exhibits is a proposal for a Gondwana Stars Observatory. After all, out here, the sky’s the limit.