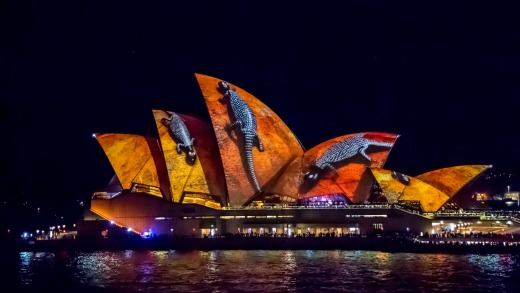 Vivid returns to Sydney’s CBD on May 27 after a two-year hiatus, its homecoming will see the works of Indigenous artists showcased more prominently and exuberantly than ever before.

Vivid festival director Gill Minervini  said, “There is no doubt that the 2022 program puts First Nations artwork front and centre.”

“The program includes a rich lineup of First Nations artists who all have such incredible stories to tell. It is such an important part of our culture and the essence of Sydney’s soul,”

When Vivid returns to Sydney’s CBD on May 27 after a two-year hiatus, its homecoming will see the works of Indigenous artists showcased more prominently and exuberantly than ever before.

For her inaugural program, Minervini’s theme “The Soul of the City” will see Vivid’s most prominent canvases, the Sydney Opera House sails and Sydney Harbour Bridge pylons, lit up with projections by Indigenous artists.

“The program includes a rich lineup of First Nations artists who all have such incredible stories to tell. It is such an important part of our culture and the essence of Sydney’s soul,” Minervini said.

Leading the line-up is First Light, a “Welcome to Country” launch ceremony and performance, celebrating the Gadigal People of the Eora nation. However, the program aims to celebrate a diverse cross section of Indigenous nations (there are about 500 spanning the continent).

“The sails of the Sydney Opera House will be illuminated with Yarrkalpa by the Martumili artists, and as part of First Light, Indigenous photographer Wayne Quilliam will have his work projected onto the Harbour Bridge pylons,” said Minervini.

The Barangaroo waterfront will also be transformed with more than 90 artworks by Indigenous youths.

“We’re so excited to bring The Gallery by Mandylights, in partnership with Crown Sydney, to Wulugal Walk in Barangaroo,” said Minervini. “The walk becomes an animated gallery bringing to life the works of First Nations students from Blacktown and Redfern.”

Beyond Vivid’s flagship light spectacles, First Nations culture will permeate the program in hip-hop and music performances, panels with Indigenous filmmakers, and comedic live debates that touch on issues of race and reconciliation.

It’s a showcase more than two years in the making, according to First Light creative advisor Rhoda Roberts AO. The festival was notably cancelled in 2020 and 2021 amid COVID-19 outbreaks.

“I had featured seven artists from around the country because I really wanted to show the diverse art styles, from rarrk [cross-hatching] in Arnhem Land to the Wanjina style in the Kimberley,” said Roberts, who was curator at the time.

“We were getting messages from people in Italy who were Australian, going ‘oh my god, it’s about time, this is what Australia is’,” Roberts said.

Coda Ridley, one of the feature artists in this year’s Wulugal Walk installation, said she hopes festival-goers actually read the story behind the artworks.

“What I’d love to do is create a book that showcase the Dreamtime stories from my mob, Goreng Goreng,” said the 18-year-old student.

The appetite for Indigenous culture, more broadly, is growing in the tourism space; in 2019, 1.4 million international visitors participated in an Indigenous tourism experience.

In New South Wales, Aboriginal tourism experiences have grown from five products to 36 since 2013, according to NSW Tourism Minister Stuart Ayres.

“In the 12 months to September 2021, a total of 158,800 domestic overnight visitors participated in an Aboriginal cultural tourism experience in NSW. These visitors stayed 398,600 nights and contributed $155 million in visitor expenditure to the state,” Ayres said.

Roberts believes Australians have finally realised what they have on their doorstep.

“I think Australians have realised that they hosted the oldest living, adapting culture on the planet, which is something we should be celebrating,” said Roberts.

“We have seen a groundswell over several decades of work, but now we’re seeing the importance of the Indigenous narrative – the inclusion of the voice, the music, the dance, the song, the story that goes with the artwork. We’re starting to see this holistic view in Vivid, which is really exciting.”