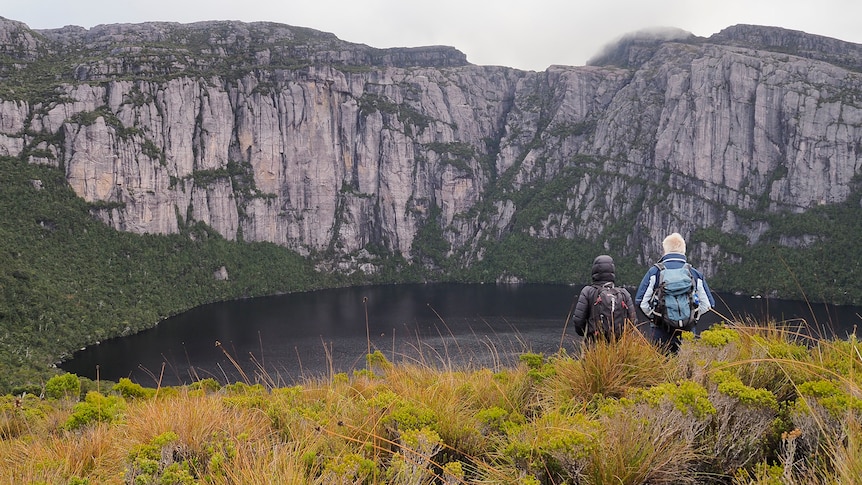 Tasmanians will know if the state’s next iconic multi-day hike planned for the state’s West Coast will go ahead by the middle of the year.

Tender documents for the second stage of the development, planned for the Tyndall Ranges — between Tullah and Queenstown — state a feasibility study determining if the project is viable should be complete in coming months.

The documents show the proposed route for the walks, which will ideally consist of three and two-day treks, plus a series of part and full-day walks.

Under the plan, camping sites and covered accommodation would be built on the eastern shore of Lake Huntley and below the almost 1,200-metre-tall Mt Geikie.

Stage two of the project will only go ahead if the feasibility study identifies an ideal route, with the winning bidder then tasked with getting development approval for the project and completing an environmental impact assessment.

They will also have to ensure the project gets approval from Tasmanian Parliament’s Public Works Committee and get it past an Environmental Protection and Biodiversity Conservation Act (EPBC) referral.

The preferred corridor for the walks runs north-south from Lake Plimsoll to the Lake Margaret power station and east of Mt Geikie and Mt Tyndall.

Walkers would catch a bus from Queenstown to both the start and end of the walk.

‘Go back to the drawing board’

Tasmanian National Parks Association president Nick Sawyer is extremely concerned about the push to turn the Tyndall Ranges into the next Three Capes walk.

He said the area currently just has a few rudimentary tracks formed by bushwalkers going up to the top of the mountain range and is incredibly worried about the impact thousands of walkers would have.

“Even though none of the proposed tracks are going up into the very sensitive alpine area at the top of the range, they are going to make it an awful lot more accessible by having a high-standard track that goes very close,” he said.

“It seems inevitable that walkers are going to use the improved access to get into the very sensitive areas at the top of the range.”

“Just the sheer number of people up there and the trampling by walkers will cause more tracks to develop and the area will need more management and become less natural, all the things we’ve seen elsewhere.”

Parks and Wildlife Service deputy secretary Jason Jacobi said he did not share Mr Sawyer’s concern as there was already a well-known existing bushwalking track used to access the alpine areas and the proposed new development would go nowhere near it.

“It stays to the lower slopes and the lower lakes [and] it would be extremely difficult for somebody to leave that track and to venture up onto the alpine area and there would be no incentive at all for anyone to do that,” he said.

Mr Sawyer also said Lake Huntley, near where one of the proposed accommodation sites is, was “the most spectacular glacial cirque in Tasmania” and putting huts and walking tracks near it would “totally destroy the naturalness of that lake”.

Mr Jacobi said market research showed people were looking for walks between two and four days, and the difficulty and duration of potential walks, along with the cost of building them, would go a long way towards determining the feasibility of a walk in the Tyndall Ranges.

“Also, the market research is telling us that people obviously want a place with a high degree of quality natural scenery, but they’re also interested in things like geomorphology and history and in this particular case in the Tyndalls, there’s quite an extraordinary array and diversity of geological history, mining history, hydrological infrastructure, all of which add to the appeal of the walk as an experience,” he said.

Mr Jacobi said the terrain in the Tyndall Ranges automatically meant it would be a more challenging walk than the Three Capes walk.

“We’re looking to probably pitch it as something between the Three Capes track and the Overland Track, so it becomes the next stepping stone, I suppose, for walkers in their adventure or their pursuit to take on more challenging walks,” he said.

“The market research we do and the socio-economic feasibility will very much determine the standard of the track, how much infrastructure we do actually put in place to support and assist people to get into the walk and to appreciate the environment and also we want it to have a degree of challenge.”

Mr Sawyer said almost any other area in Tasmania would be better suited to the state’s next iconic walk than the Tyndall Ranges because of the area’s “absolute worst weather in Tasmania” and its sensitive alpine vegetation.

“The trend in walking very much seems to be towards shorter, easier walks, given the exposure to the weather this one is going to be a potentially fairly tough one, unless you’re lucky enough to strike a spell of fine weather,” he said.

But Mr Jacobi said he wasn’t worried about the weather threatening the viability of the project, saying any walk in Tasmania could present “extraordinary climatic challenges”, but said the proposed route keeping to the lower lakes served the dual purpose of keeping away from sensitive alpine vegetation, but also the most extreme weather conditions.