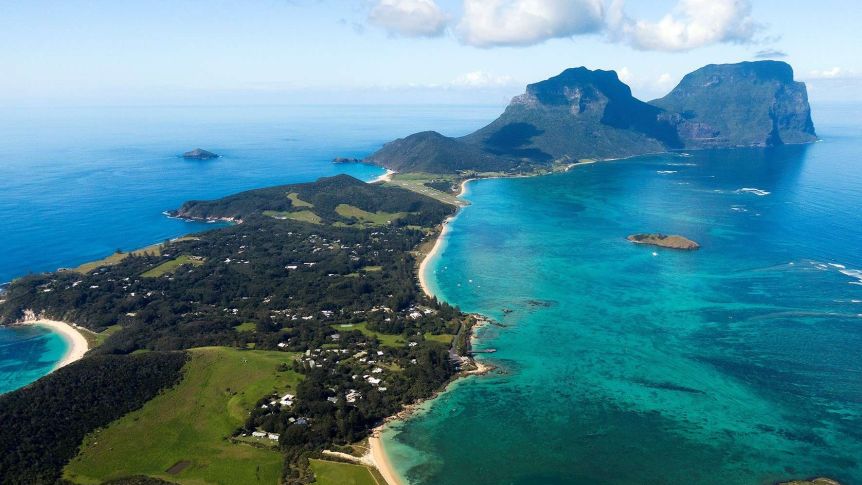 It’s an idyllic spot that, for the past six months, has given new meaning to the phrase private island paradise.

Lord Howe Island, 600 kilometres off the east coast of Australia, has been closed to tourists since March 21 to keep coronavirus out.

And its 350 residents have been taking advantage of having the pristine waters and sub-tropical forest hiking trails all to themselves.

With only one doctor on the island and limited medical facilities, the NSW Government made the public health order to protect elderly residents, the oldest of whom is 98.

But with infections in NSW flatlining, the island paradise has opened up again, with the first visitors flying in on private plane on Friday.

The curator of the Lord Howe Island Museum Ian Hutton said the long period of isolation had been good for the island — and for many residents.

“It just feels like the island has had a rest.”

“You can tell looking at the picnic areas, the grass is not trampled.”

He said for many of the older residents, it was like stepping back in time to the 1970s, before the island’s airstrip was constructed.

Before then, tourists arrived by sea only and were largely limited to the summer months.

“The older residents say it’s got that feel about it,” Mr Hutton said, adding that back then, winter was a time for the locals to catch up on odd jobs.

“They got a chance to paint a bedroom or do some house renovations, whereas the last 30 years since Qantas has been here, the tourism has been seven days a week and it’s been pretty full on.”

The enforced closure due to the pandemic has been a rare opportunity for residents to break out of the rat race.

“There was probably a bit of a sigh of relief for a lot of people on the island.

“We got this chance to get to know each other or just get out and enjoy the walks the island is famous for.”

A chance to catch up with family

At this time of year, Aaron Ralph and his wife Lisa, are usually busy running diving tours for tourists in the pristine waters of the Lord Howe Island Marine Park.

But this year has been a “rather lovely” change, Mr Ralph said.

“For me personally it’s been a wonderful chance to catch up with my family because I work seven day a week through the season.”

He’s had more time to spend with his two young daughters, aged six and four, but it’s come at a financial cost.

“From a business perspective, it’s been pretty challenging to put it lightly. Without Jobkeeper we’d be in a hole.”

But while he’s enjoyed a reprieve, he’s now impatient to get back to work and get the money flowing again.

“We can’t bury our heads in the sand and assume we’re going to have this beautiful tropical island all to ourselves forever,” he said.

“The only industry on the island is tourism so everyone’s dependent on it.”

Mr Ralph is optimistic the season will recover.

“As soon as they announced the island was opening, we have been inundated [with bookings],” he said.

A lot of the interest has come from organised dive tours that usually travel to locations in Micronesia or south-east Asia.

“They’re looking for an overseas holiday and this is the closest thing,” he said.

Bubble has ‘gone on too long’

Kathy Green and her husband, John, run the Earl’s Anchorage resort and restaurant on the island.

“It’s been nice to have the island quiet and sort of slowed down but financially it’s been terribly difficult.”

Now they’re getting ready to welcome their first guests in six months.

“John took 10 bookings yesterday, people are dying to get out here, people just want to travel,” she said.

“Already December and January are virtually booked out at our place. A lot of people who would be going to Aspen or Italy or going overseas somewhere and can’t go but are wanting to travel.”

Ms Green said the decision to keep extending the shutdown had been frustrating and she believed the island could have reopened sooner.

“The biggest complaint I’ve got about the whole thing is that we’ve been treated like a separate entity to the rest of New South Wales,” she said.

“They’ve kept us in this bubble which has gone on too long.”

‘It has taken a toll’

The Chief Executive Officer of the Lord Howe Island Board Peter Adams said the isolation had been psychologically and financially tough for many.

“We have felt cut off, I guess. The longer the closure has gone on, the more it’s started to have an effect,” he said.

“We can’t even have a tooth removed on the island without going to the mainland. It’s a great place to be if you’re in isolation but it has taken a toll.”

He said local businesses had struggled with not knowing when the island would reopen.

“Many of the staff that work in cafes and accommodation lodges are brought in from off the island.

“Some places have lost their recurrent staff who have had to take other jobs because of the uncertainty around reopening,” he said.

Stephen Sia, who runs the local Post Office and a cafe, has mixed emotions about the isolation.

“On the one hand, we felt relieved and happy we didn’t have to worry about the virus but on the other hand, the economy and the financial aspect of it is a bit stressful,” he said.

“In the beginning everyone was very, very happy we were closed but after six months we are ready to reopen.”

Mr Sia said with the daily flights to the mainland suspended, residents have had to rely on one another.

He said a community notice board where people can ask for things they need, had been particularly effective in bringing people together.

“Has anyone got this kind of screw, that kind of part? We don’t throw things away, we tend to be hoarders,” he said.

He said the long months of being closed off to the outside world had brought benefits as well as hardships.

“This has been a great time to get our house in order, to do all the maintenance we need to do,” he said.

“Because we were forced to be together, we had more time to talk to each other and do things together. It’s actually brought us closer.”