Sydney sees trams for the first time in 50 years 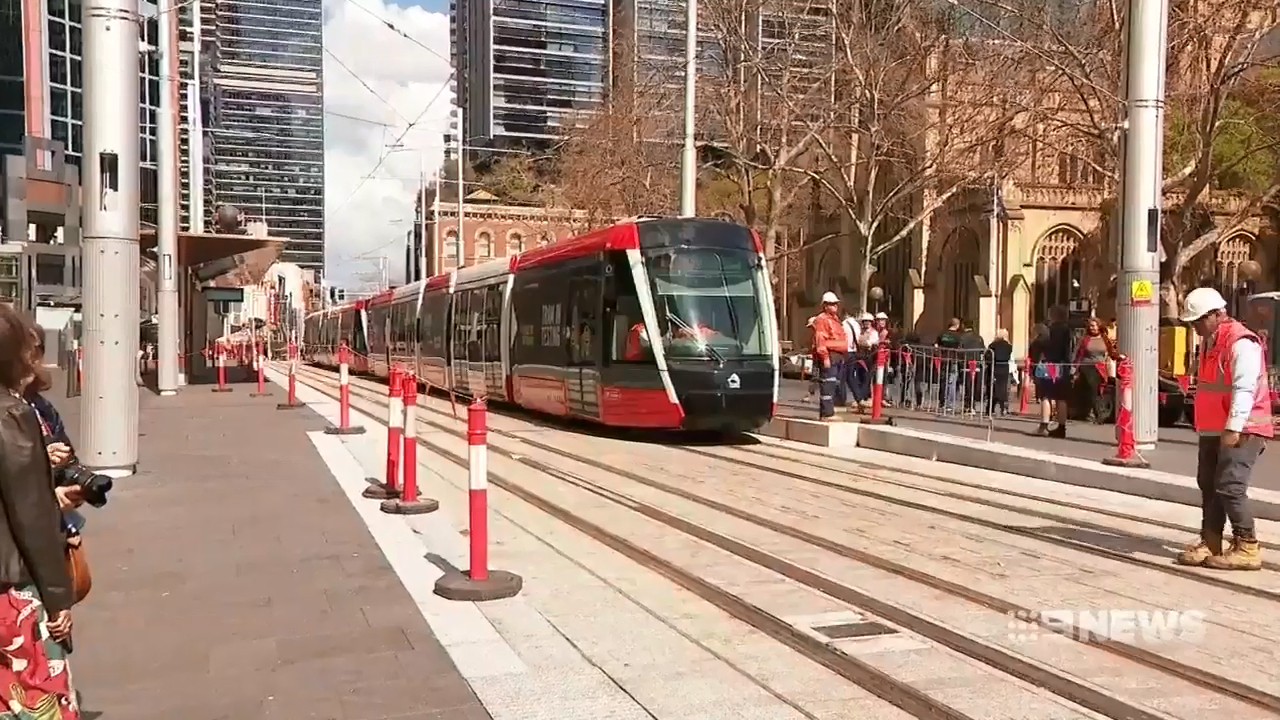 The sight of pedestrians stopped in their tracks along one of Sydney’s most famed streets during the busy lunchtime rush said it all.

Pulling out their mobile phones, hundreds rushed to capture a sense of history.

Major milestone for Sydney’s long awaited light rail project, daytime testing along the entire route from Randwick to the City is now in full swing

Almost four years after George Street was closed to buses for construction of a light rail line, a new tram carrying Premier Gladys Berejiklian glided from Town Hall to Circular Quay during the day for the first time, signalling the start of regular passenger services shortly before Christmas.

It was a step back in time for those who fondly remember the days of Sydney’s extensive tram network, which was ripped up in the 1950s and early ’60s.

“It is nice to see them back – it should have been done years ago,” said Surry Hills resident David Buckingham, 67. “I cannot understand why the politicians back in the ’60s took them out and put the diesel buses in. We had a bigger tram network than Melbourne’s.”

More than half a century after the old trams were consigned to history, the looming start to passenger services on the 12.7-kilometre line from Circular Quay to Randwick and Kingsford has helped the Berejiklian government turn the focus from the disruption of the past few years.

“They said it would never happen – here it is,” Ms Berejiklian declared on Wednesday.

“It’s just going to change Sydney forever for the better.”

Cost blowouts, repeated delays to construction, legal disputes and major disruption to businesses and residentsalong the route of the line have dogged the project. And the final bill to taxpayers is expected to be about $3 billion, almost double the initial budget of $1.6 billion.

But Ms Berejiklian said a project “this huge is always difficult”.

“I knew from the day that we signed up for the project it wasn’t going to be easy, but it has been well worth it,” she said. “We now have a new form of transport for a global city.”

Northern Sydney resident Doug Bailey said the light rail line would become part of the fabric of the city, and credited the government for seeing the project through. “These guys have stuck their necks on the line. They have got off their backsides,” he said.

While the line from Randwick is due to open in early December, the trams are not expected to begin carrying passengers along a branch line to Kingsford until March next year. The two-set trams are each capable of carrying up to 450 passengers and will operate from 5am to 1am.

The fares will be the same as the distance-based Opal rates that apply to the inner west light rail from Central Station to Dulwich Hill. A holder of an Adult Opal card will pay $4.80 for a one-way journey for the entire length of the line from Randwick or Kingsford to Circular Quay.

The start of light rail services between Randwick and Circular Quay will also result in a shake-up of the bus network in the city’s south east.

Transport Minister Andrew Constance said commuters would be given a month’s notice of changes to bus services, which would be finalised once a demand analysis was completed, noting that a 67-metre light rail vehicle was the equivalent of nine standard buses.

“I would remind everybody … of what George Street used to like with the buses,” he said.

And Mr Constance again urged the public to be aware of the trams running along the line as part of testing and warned people to take personal responsibility.

“Get off your mobile phones, keep your head up, be aware of what’s around you. We want people to be mindful,” he said.