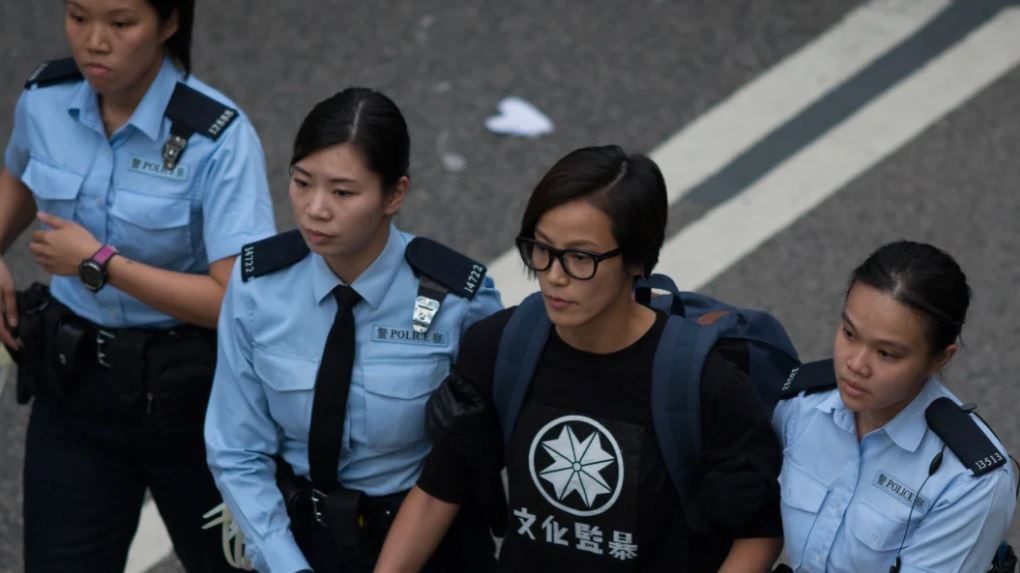 Prominent Australian professor Clive Hamilton has questioned whether the National Gallery of Victoria only shows pro-China artists after a discussion panel on the Hong Kong protests was rejected on security grounds.

The NGV is currently running a high-profile exhibition of ancient terracotta warriors on loan from China.

Mr Hamilton said that exhibition “almost certainly” played a part in the gallery’s decision to decline to host the pro-Hong Kong panel.

“I’ll bet that the NGV was thinking about how the Melbourne Consulate General would react if they hosted this event with Denise Ho and Badiucao.”

Mr Hamilton said Chinese government influence over art was occurring around the world and cited the example of the cancellation of the Shen Yen ballet in Madrid, a group that claims to revive 5000 years of Chinese culture that was nearly destroyed by the Communist Party.

“After pressure from Beijing, the director rang and said ‘technical reasons meant we had to cancel it’.

“The Teatro Real had been developing close links with China, it had signed up to the Silk Road League of Theatres, it had had a visit from the wife of Xi Jinping.

“So they totally caved into a totalitarian power and cancelled an artistic performance that Beijing doesn’t like. And it would be a crying shame if Australian artistic institutions caved in in the same way.”

Professor Hamilton, a leading critic of Chinese influence who will speak at the event, said the NGV should have been the host.

“I don’t think public institutions should be deterred from hosting pro-democracy events featuring human rights activists who are being persecuted,” he said.

“It makes you wonder whether only Chinese artists who are smiled upon by the regime will be welcomed into the NGV. Is that now the case?”

Mr Hamilton said there had been a “sharp increase” in Chinese Communist Party influence in Australia over the last five to ten years.

“Undoubtedly tensions have become extreme in recent weeks because of events in Hong Kong. But when did an art gallery stop hosting art because it’s controversial?

The gallery did not respond to questions about the Hong Kong forum, instead releasing a statement saying the gallery “was unable to accommodate the security and logistics required to book this event with short notice”.

“The NGV supports artists’ rights to express a range of artistic and political viewpoints,” the statement said.

Speaking to The Age ahead of her trip to Australia, where she intends to meet politicians and activists, Ms Ho said the difficulty in securing a venue for the Melbourne event was worrying.

“When this kind of intimidation and power, whether it is from real political pressure from the Chinese government or whether it’s because of issues on the ground, it comes back to the same root cause of this authoritarian government not allowing different opinions.

“We should really address this moment where it is still address-able and not wait until the same thing [that] is happening in Hong Kong is happening in the global community.”

Ms Ho’s activism has catapulted the pop singer into the global spotlight and while she is used to being rejected from venues in Hong Kong, she said she did not expect it to happen in Victoria.

“But now you can see this type of self-censorship that is starting to creep into different areas and countries and this is very alarming,” she said.

“Australia is a very free and open society, you would think these institutions would be pro the fight for freedoms.”

said the volunteers offered to cover the costs of additional security and inform Victoria Police of the event. But he feared the gallery’s reluctance to host the event revealed something deeper.

It raised a question of whether nationally funded institutions were afraid of backlash from Beijing, he said.

“They are choosing to hide away from responsibility addressed in this very important issue. I think it’s extremely irresponsible and it’s not acceptable.”

Badiucao confirmed he had now secured Melbourne City Conference Centre as a venue but he remained frustrated by the lack of communication from the NGV. 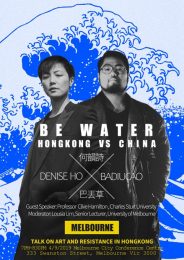 The event, Be Water: Hong Kong vs China, will be hosted at the Melbourne City Conference Centre on September 4 and will bring together Ms Ho, Badiucao and academics to discuss the months-long protests gripping Hong Kong and the future of the city.

The Hong Kong protesters’ motto is Be Water, a quote from kung fu legend Bruce Lee, which Ho says explains how they gave up the notion of occupying city streets for a tactic of continual, fluid protests.

Ms Ho said she hopes to bring moral support to the pro-democracy students from Hong Kong in Australia.

“They are feeling very angry and desperate about the situation so hopefully I by being there, I can give some support to them.”