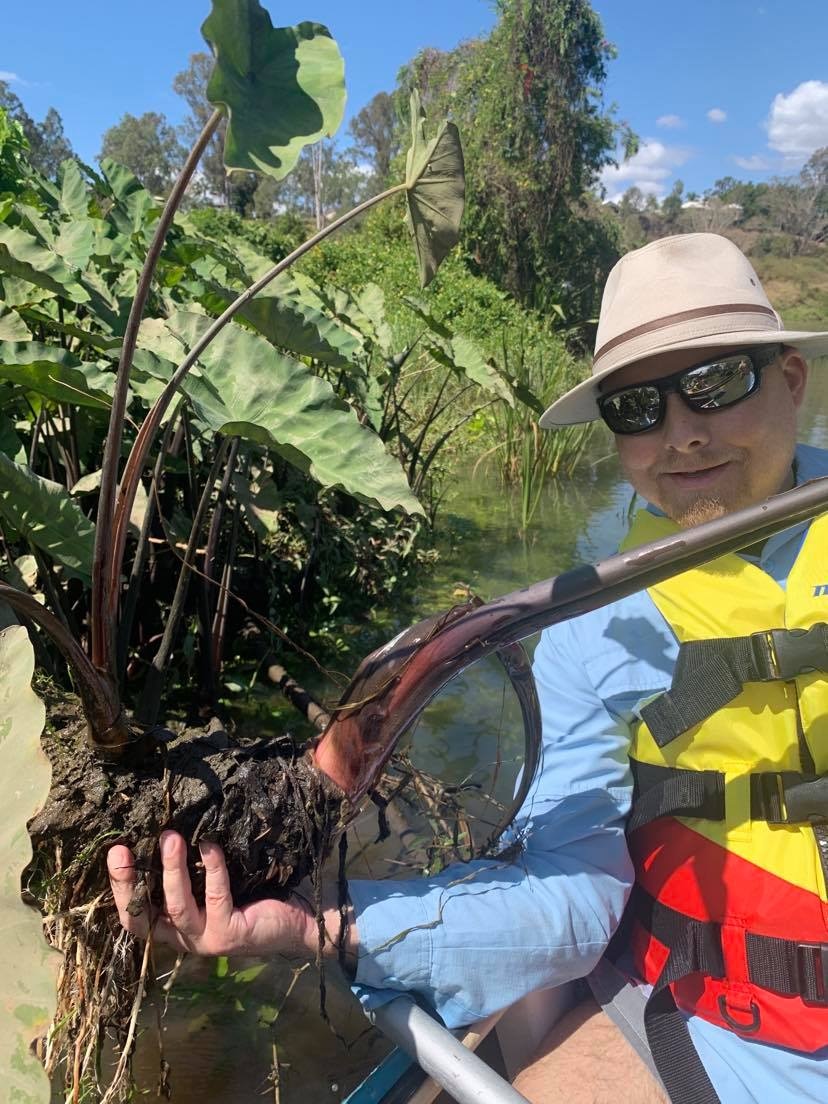 Scientists in Queensland are searching for new varieties of taro, a popular vegetable in the pacific islands that is at risk of becoming a victim of climate change.

A team of Queensland scientists have traded their lab coats for paddles and canoes, as they scour the Brisbane River in search of “the food of the gods”.

They’re hunting for new varieties of taro – a starchy vegetable crop – that could help improve food security in the Pacific.

University of Queensland plant physiologist Millicent Smith said domesticated varieties of taro – a staple food in many Pacific countries – were under threat from climate change.

“Our nearest neighbours in the Pacific are very vulnerable to the effects of climate change, particularly in the coastal regions where rising sea levels and lowering water tables lead to saline soils,” Dr Smith said.

“Salinity really reduces the growth of [taro] plants – it stops plants from being able to basically function in their normal way.”

Dr Smith said in some cases, soil salinity could kill the crop entirely.

On the hunt for new varieties

Researchers are trying to find new types of taro – Colocasia esculenta – and related plants that are resistant to salt.

“Particularly around Brisbane and Moreton Bay you see taro relatives and also sort of a weedy taro growing in areas where there’s a lot of salt, so around the bay, in close to waterways and wetlands,” Dr Smith said.

“We think that these taro wild relatives might have characteristics that allow it to be much better adapted to salinity than the varieties that are found within the Pacific.”

Hunting for taro in the rivers and bushlands around Brisbane has become a fun weekend activity for the team.

“We have gone out on canoes on the weekends to try and find taro. We’re going bushwalking and looking for it whenever we can,” Dr Smith said.

The researchers have been collaborating with the region’s largest scientific body, The Pacific Community, to analyse the DNA of hundreds of taro crops collected from around the world.

UQ molecular geneticist Bradley Campbell said the project was important for food security in the region and around the globe.

Ensuring the future of a Pacific staple

The decimation of taro crops from climate change or other threats could be devastating for Pacific countries, which rely on the plant as a source of food and income.

“I was in the middle of kind of going commercial with farming with taro … it was so very hard at the time,” Tusani said.

To combat the disease, agricultural scientists used a similar strategy to the UQ researchers — finding varieties of taro that were resistant to leaf blight.

Tusani, who now exports taro to New Zealand and the US, said the intervention saved her livelihood and the industry.

Taro also has cultural significance for some Pacific islands.

In Hawaiian folklore, it is said to have grown from the burial place of a stillborn child belonging to the sky god, Wākea.

Some Samoan myths refer to taro as being brought to earth from the heavens.

“Taro is something that we eat every day,” Tusani said. The deaths of two divers from crocodile attacks come less than a month after Solomon Islands lifted its ban on harvesting sea cucumbers in an effort to boost the pandemic-stricken economy.

“Even if we don’t have fish or meat, as long as we have taro on the table with coconut cream [we] will still survive with that.”

Dr Smith said analysing taro plants was important for protecting food security as well as culture in the Pacific.

People in the community can also get involved in the project by documenting taro plants they come across.

“We’re using an app called iNaturalist, which is a publicly available app. It’s really helpful and it actually identifies everything for you,” Dr Smith said.

“You take a photo of it, it will suggest what the species might be … then it will automatically be added to our project so we can see where you found it.”