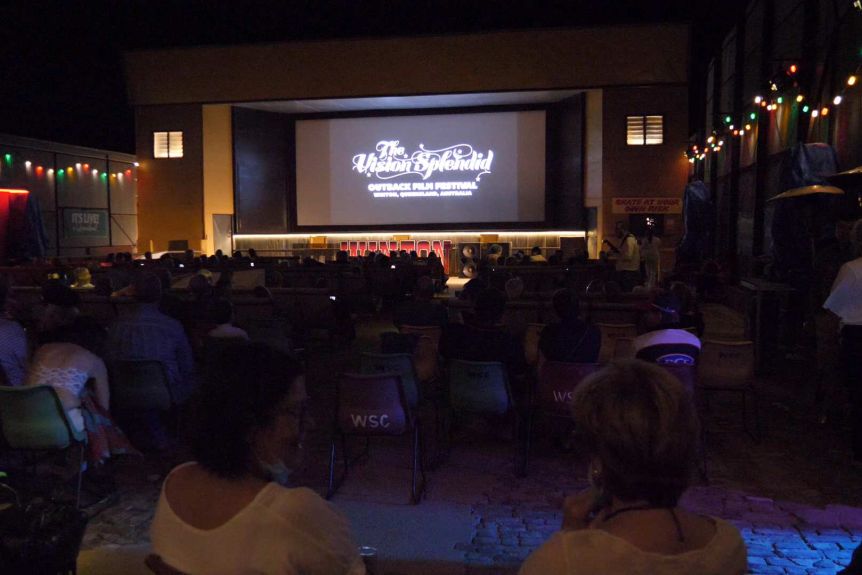 Winton’s Vision Splendid Outback Film Festival (VSOFF) is 35% up on its best ever year of ticket sales thanks to intrastate tourism.

Film showings in the outback are an under-capitalised tourism resource, with starry skies, mild temperatures and all-but-guaranteed clear weather making them a reliable attraction.

This story has been included in The Tourism News’ #CutRedTapeCreateJobs campaign because the simple act of showing a movie outside is subject to local (council) regulations, as is the service of food and drink. The simplification of that services’ delivery would be a profitable boon to any community of which an outdoor cinema is a part.

Audiences at Winton’s film festival watch the silver screen under the stars in the Royal Open-Air Theatre, which turned 100 in 2018. (ABC Western Queensland: Craig Fitzsimmons)

Few know the meaning of the phrase “the show must go on” more than Vision Splendid Outback Film Festival director Mark Melrose.

The last six months have been rocky, with coronavirus restrictions throwing the fate of this year’s iconic event in the western Queensland town of Winton into uncertainty.

But with a tweak to the schedule and COVID-safe practices in place, the director has called “action” on the nine-day film festival.

“Rollercoaster is probably a bit of an understatement,” Mr Melrose said.

“It’s been extremely challenging to get to this particular point. There was a while there, we [thought we] may not be here.”

But with other iconic outback events like the Birdsville Races and Big Red Bash cancelled this year, Vision Splendid looks set to benefit from audiences who want an escape from the stresses of 2020.

“We’re glad we made the decision to postpone and not cancel,” Mr Melrose said.

“I think the way that sales are going at the moment, we’re justified in making that decision.”

Despite a reduction in maximum audience capacity, the festival has sold 35 per cent more tickets than its previous biggest year.

“To have that experience of sitting here, in the deck chairs, watching the screen, with an open-air theatre, with nothing but the Milky Way above them, it is quite spectacular.”

Tyranny of distance can cause hiccups

He filmed The Proposition in the town, once dubbed “the Hollywood of the outback”, in 2004.

“I lived here for four to five months, right the way through the summer actually, and I think people get some kind of an award for doing that,” Mr Brown joked.

“It got up to like 50 degrees and the camera equipment started melting.”

Mr Brown is back this year to screen his hotly anticipated documentary Slim and I, which tells the little-known story of Joy McKean, wife of Australian country music legend Slim Dusty.”Here was a story which was screaming to be told,” he said.

“This is the story about a woman who was the first woman [who] ran a music radio show … won the first Golden Guitar … was one of the founders of the Tamworth [Country Music] Festival … and ran all Slim’s tours.

“Not only that, [she] wrote some of the best songs he ever sang.”

It was a homecoming of sorts — the first movie ever screened at Winton’s film festival was about Slim Dusty — but an issue with the projector meant the documentary was unable to be shown on opening night.

It was nothing the festival organisers were not used to.

“The tyranny of distance that we face is you can’t run up the road and grab things that you have down in Brisbane,” Mr Melrose said.

“Having to ship all the projection equipment out here, it just makes it very challenging to make sure you get it right, and you don’t have anything to fall back on.”

While other budding moviemakers may have their eyes on Hollywood, Shannon Maugham thinks Australia’s version of Tinseltown is a better place to launch a career.

“There’s so many incredible stories you can make out here because of the landscape, but also the people.

“There [are] endless short films waiting to be found in Winton.”

The young producer and actor has returned to the outback this year with the Vision Splendid Institute, a partnership between the festival and Griffith Film School.

It sees students and alumni shoot a production over the course of the festival for airing on the final night.

Ms Maugham hoped it would bridge the gap between film school and industry.

“I think we’ve seen the same directors, the same producers, the same actors for quite a long time now,” she said.

“Hopefully, through things like this we can start to create new, fresh stories and show that you don’t have to wait 20 years to break into the film industry.”