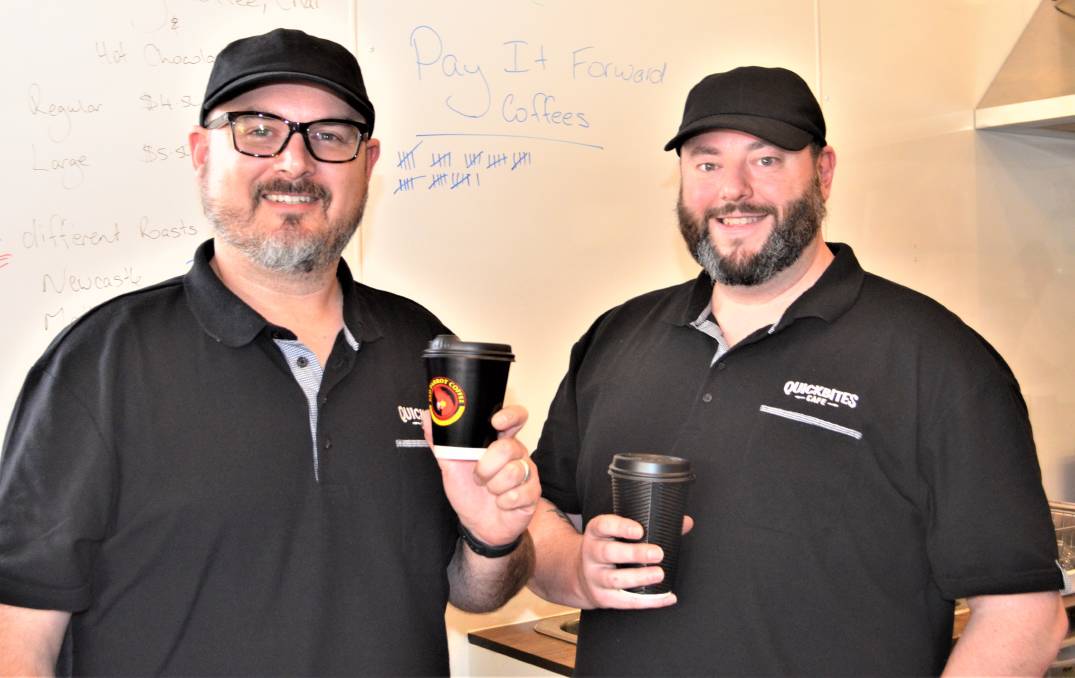 From the Cessnock Advertiser, 12th November 2020

HELPING HAND: Quick Bites Café owners Phil and Luke Collins say they have been overwhelmed by the community support for their pay-if-forward initiative.

A new café in Cessnock is offering a boost for those doing it tough – a caffeine boost, that is.

Quick Bites Café, which opened in Vincent Street two weeks ago, has set up a ‘pay it forward’ system, which allows customers to purchase a coffee ‘for the board’ that will go to someone in need.

It came after a man stopped by the café on Wednesday morning and asked if they had such a system in place.

“(We) had to say no, but there will be by the end of the day,” café owners Phil and Luke Collins said on Wednesday night in a Facebook post, which has since been shared more than 300 times.

“I made him a coffee and gave him something from our cake fridge to eat for morning tea, he thanked me and went on his way.

“From today onwards, when you come into our cafe, you’ll be able to purchase your coffee and also purchase one for the board so those in our community who are doing it tough will have a safe place they can come and ask for a coffee and not be judged or made to feel ‘less than’ because they’re in a not-so-good place.

“I truly hope the community will get behind this idea and help us make a difference to those who need a helping hand – albeit a caffeinated one.”

And get behind it they sure have – the café had 17 coffees on the board before 9am Thursday, and the tally had grown to 41 shortly after 1pm.

“We’ve been flat out all day – the support from the community has been really overwhelming,” Phil said.

“We’ve had people transferring money to our bank account to pay for a coffee on the board, and businesses saying they’ll come in and top it up when the tally gets lower.”

Open 6am to 6pm seven days a week, the café is only serving coffee and takeaway sweets for the time being, but will start serving food in the near future, with a menu including vegan and gastric sleeve-friendly meals.