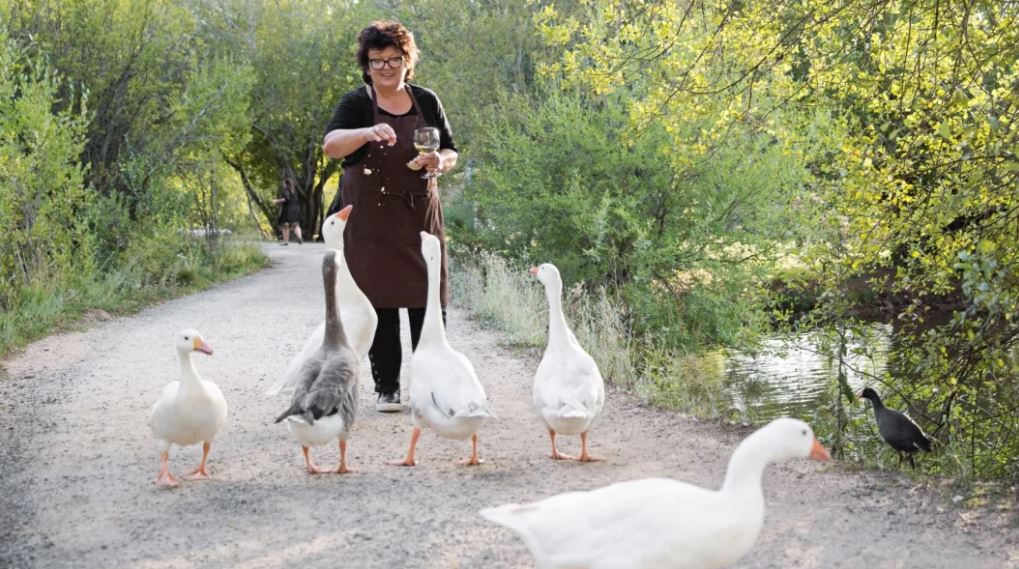 Daylesford locals have converged on the town’s picturesque lake to stop contractors removing a flock of geese, and blocked the removal of four birds.

Hepburn Council last week voted to boot the more than 30 geese from Lake Daylesford, citing the $5000 clean-up bill and environmental damage, despite their popularity with tourists.

Three contractors descended on the lake about 1.30pm on Monday, and were met by about three dozen angry locals.

“The geese are very, very distressed. You can hear them calling,” Ms Wolf-Tasker told The Age.

Ms Wolf-Tasker said there was no consultation with the community, which she said was “a great concern” to her.

Tourists were lining the balconies of their rental properties to watch on, she said, and some families had taken their children away from the lake because it was causing “such distress”.

Locals who could get away from work at the last minute went down, and people on their lunch breaks blockaded the lake with their cars to stop the contractors from taking the geese.

The council engaged a contractor to transport the geese – to a private sanctuary on the Mornington Peninsula – at a cost of $2750, to be funded through the shire’s biodiversity budget.

Victoria Police confirmed officers were on site to monitor the situation.

The 29 geese and some ducks were expected to arrive at their new home just after 7pm on Monday night.

Another four had to be left behind after being “cornered by the protesters” on to private land in Daylesford, and were pining for each other, Nigel Williamson from Animal Rescue Service said.

“I wasn’t happy with that at all … We wanted to keep them together,” Mr Williamson said.

The protesters “were very peaceful”, but the contractor said he was verbally abused and claimed he was almost pushed into the lake.

“It would have gone a lot smoother and a lot easier if we weren’t being interfered with by everybody.”

Mr Williamson said the locals had an “emotional attachment to the geese, which I fully understand and appreciate”.

But the contractor said it came down to the welfare of native wildlife and the health of the lake, as well as the geese themselves. Swans and other native birds would likely increase in numbers as a result, he said.

“Geese can be quite aggressive towards native animals … Native birds get chased off.”

He added that it was most humane to go ahead with the re-homing before breeding season because it would be “devastating to move a mother goose from her nest and eggs”.

Shire Mayor Don Henderson said council would be monitoring the lake for the remaining four geese.

In a statement posted to Facebook on Monday night, he said the council decision was based “on sound environmental, social and economic grounds”.

“The domestic geese were impacting the environment of the lake and driving away native birds (including black swans), there have been complaints from visitors to the lake about the aggressive behaviour of the birds (particularly during breeding season) and there are costs associated with cleaning-up after the geese,” Cr Henderson said.

“The rehomed geese and ducks will make their new home in an animal sanctuary, where they will have access to five dams on a secure private property.”

About 3400 people have signed a Change.org petition opposing the move.

The council last week said the removal would be done at a time to minimise stress to the geese.

A report prepared by the council’s biodiversity officer said the growing goose population was impacting native black swans – and costing the council $5000 a year to clean up droppings.