Landmark eco-development to go ahead on Kangaroo Island 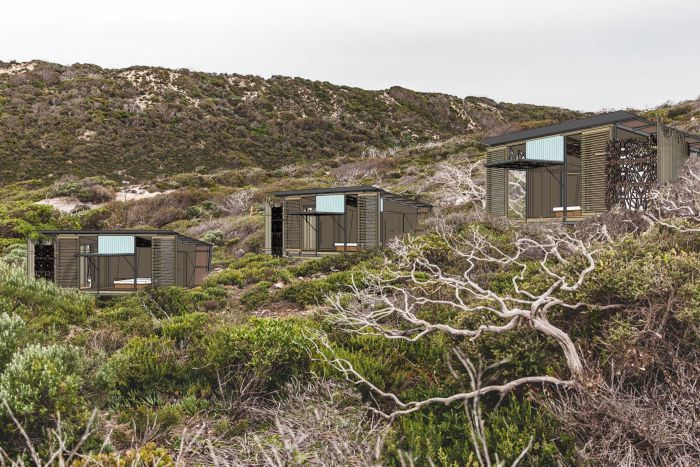 The SA government has said the parks should be experienced – they’re not just museums.

A controversial ecotourism accommodation project on Kangaroo Island has been given the green light — and it could lead the way for similar projects that will open up South Australian national parks currently “under lock and key”.

The Australian Walking Company (AWC) has received the final sign-off to build along the Kangaroo Island Wilderness Trail in Flinders Chase National Park.

“Flinders Chase is a beautiful asset and a great opportunity for us to open up to nature-based tourism, which is something that I suppose has been a real trend around the country and here in South Australia,” he said.

“It’s not a museum — it’s actually something that people can go and enjoy.

“But what they’ve done in the process is work on a very eco-sensitive design for this project.”

He said the AWC had been working with the NVC to “minimise the impact on the natural landscape” so the footprint it left was “as small as possible”.

In a statement, AWC general manager Heath Garratt said the company was a “recognised leader in environmentally-sustainable travel practices” and had been delivering national park walks for 30 years.

“We take our environmental stewardship responsibilities seriously and we know we will deliver a world-class outcome for the park and South Australia,” he said.

“Our new sites in the Flinders Chase National Park will be less than half the footprint of the existing campsites.”

Friends of Parks SA spokeswoman Bev Maxwell said she was disappointed with the location of the project.

“It has allowed the door to open for the untouched areas of the park to be invaded,” she said.

She said the group was not opposed to the accommodation.

“We’re saying get that accommodation back on the [walking] track … where it’s not going to be in the way of other people who want to enjoy the park,” she said.

Eco-Action Kangaroo Island spokesman Fraser Vickery said there was no public consultation on the project and some people wanted the eco-pods closer to the existing trail.

“We’re talking about one of the most significant national parks in Australia — we’re talking about an area of totally unimpacted native vegetation and habitat for a whole range of native threatened species,” he said.

However, Kangaroo Island Mayor Michael Pengilly said he was “glad it has been decided”.

“There’s people on the island who don’t want it, I acknowledge that … but Flinders Chase is enormous,” he said.

He compared the opposition to this project to that ahead of the Southern Ocean Lodge development — near Kingscote — which is “now widely acknowledged as being fantastic”.

Similar project could pop up on Yorke Peninsula

Mr Knoll said the $850,000 grant given to the AWC was provided by the former Labor government.

“We’ve significantly scaled back grant programs to individual businesses right across the state,” he said.

However, he said the current State Government had “made comments before the election” about wanting a similar development on Innes National Park on the Yorke Peninsula.

“It’s a fantastic asset there down the bottom of the peninsula that people should be able to go and enjoy,” he said.

“So, the opportunity to open up our national parks for people to enjoy in this way, we think is a great idea.”

He said opening up national parks for tourism was good from an “economic point of view” but it would also make the parks accessible and not “inaccessible wilderness under lock and key”.