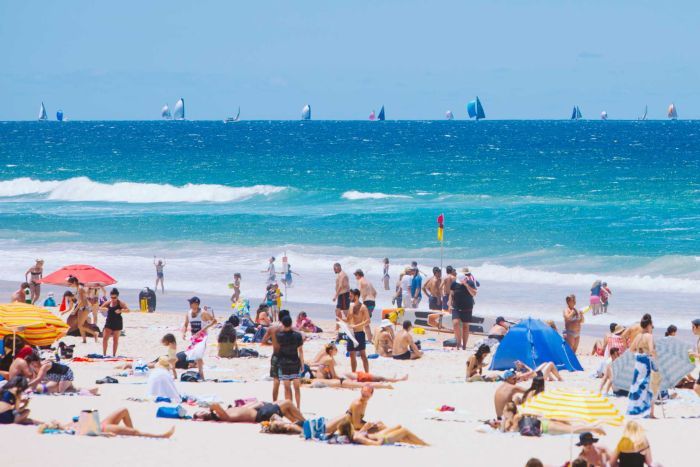 There are 41700 tourism jobs on the Gold Coast, a fact the GC authorities take very seriously.

They often clog up footpaths taking selfies and drive their rental cars below the speed limit, but as frustrating as tourists can be, they’re the lifeblood of Australia’s Glitter Strip.

Alongside construction, tourism continues to be the main economic driver of the Gold Coast, which is celebrating 60 years since its name changed from South Coast.

Be they Brisbane residents driving down the M1 or planeloads of people from China, tourists consistently delivered a return on investment, according to Annaliese Battista, the chief executive of Destination Gold Coast.

“In 2018, a total of 12.6 million visitors flocked to Australia’s favourite playground, injecting $5.7 billion into the city’s bottom line,” she said.

Local resident Mark Weblin used the Curious project to ask ABC Gold Coast how many people were employed in the area’s tourism and hospitality industries.

“Tourism is the engine room of our economy, supporting some 42,000 jobs or 14 per cent employment on the Gold Coast,” Ms Battista said.

“More specifically, there are 4,500 employing businesses in the Gold Coast tourism industry, so there is no doubt the sector is a significant employer.”

The industry touches almost every part of the Gold Coast, with one in six jobs either directly or indirectly resulting from tourism.

This includes transport, accommodation, retail and entertainment, along with tour and travel operators, dining and food services.

Ms Battista said tourism was part of the city’s history and believed it was a critical component of future success.

“Today, the Gold Coast is Australia’s fourth most-visited city and remains the beating heart of Australia’s holiday playground,” she said.

“We would not be the nation’s largest regional city without tourism.”

The Gold Coast Tourism Board was established in 1975 by Keith Williams, the larger-than-life character who founded Sea World.

He asked more than 40 tourism operators from Coolangatta to Southport to band together and develop a tourism strategy.

“He got us all together and said we need to do something similar to what was called the Hawaiian Visitors Bureau,” said John Punch, one of the inaugural members.

The board targeted domestic visitors from Sydney and Melbourne and daytrippers from Brisbane.

It wasn’t until the Coolangatta Airport was upgraded and international hotels were built that overseas tourists began visiting in greater numbers.

The first direct international flight landed at Coolangatta from New Zealand in 1990.

Mr Punch, who is still on the board of Destination Gold Coast, which was rebranded from Gold Coast Tourism, said it was the arrival of Japanese tourists that really sparked tourism and property markets.

“The real estate agents would make their connection to Japanese business people,” he said.

“We had the starting of Bond University (1989) with Japanese money and some major hotel projects — the Marriott Hotel and Sea World Nara.

“The development was pretty rapid.”

The boom ended when there was a global financial downturn in the 1990s and it caused a dramatic drop in Japanese investment and tourist numbers.

“There was a pretty sharp exodus and it left us scratching our heads,” Mr Punch said.

“The airlines had been supplying guests to the Gold Coast, but when the drop-off occurred, the flights started to drop off.”

New Zealand has always been a constant and reliable source of tourism dollars for the Gold Coast, but China has emerged as the largest market with more than 300,000 visitors a year.

“Chinese tourism has certainly shot ahead, just as they’re shooting ahead in the world economy.”

If the number of Chinese visitors were to suddenly drop, Ms Battista said the city would bounce back like it had in the past.

“The Gold Coast’s most defining and endearing characteristic is change,” she said.

“Continuous evolution at every turn — from the way we do business, to the growth in our health and education sector, our infrastructure and culture, through to our diverse tourism and events offering — is the key component of our growth.”