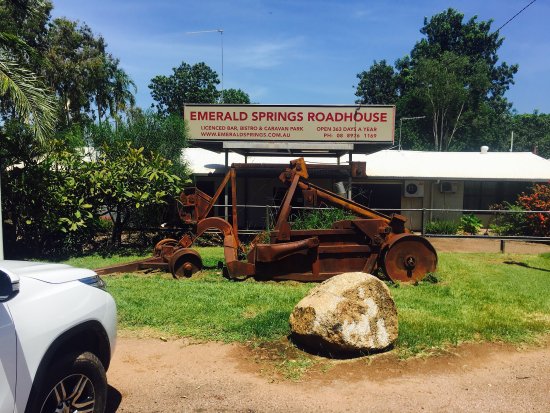 Geoff Goodrich Northern Territory businessman is looking to revamp the old Emerald Springs roadhouse as a medium-stay destination for tourists.

“I want to turn the 30-minute piss stop into a stay-over and the pool is central to that,”

“The core of the business will always remain the truckies and the Darwin/Katherine travellers,” said Mr Goodrich

LONG-TIME Territory businessman Geoff Goodrich is on a mission to breathe life into the old Emerald Springs roadhouse as a medium-stay destination for tourists.

The 1970s-era venue has lost its sparkle over recent years as motorists opt to drive through Stuart Hwy settlement, about two hours south of Darwin.

As well as breathing new life into the stop, he’s changed the branding from “roadhouse” to “pub and camp ground” to reflect the change in travel and holiday patterns.

Mr Goodrich’s association with Emerald Springs goes back to the 90s, when he recalls road trains queuing up so their drivers could buy one of proprietor Mick Pepper’s ­burgers and share a beer with a drunk pig. He resumed contact recently when commissioned to install solar power at Emerald Springs before stepping it up a notch and negotiating to buy the roadhouse instead.

The sale will be finalised soon, but Mr Goodrich is already putting in place plans to develop the 2.5ha site – the showpiece of which will be a 10m by 5m swimming pool.

“I want to turn the 30-minute piss stop into a stay-over and the pool is central to that,” he said.

“The core of the business will always remain the truckies and the Darwin/Katherine travellers.”

With a keen eye on history and a marketing opportunity, Mr Goodrich last week took to social media asking for recollections of the venue’s heyday. Thousands of responses, likes and reposts shows him there is a revival waiting to happen.

Emerald Springs’ first white settlers date back to the Overland Telegraph in the 1870s and then it was a military staging post in World War II known as 133 Mile. The army buildings formed the backbone for the town after redeployment and the roadhouse was built in 1974.

A $140,000 NT government Roadhouse to Recovery grant is delivering the pool, four 50sq m airconditioned ensuite safari cabins and an adventure playground. Mr Goodrich has added a kennel and dog run so grey nomads can leave their pups while exploring national parks.

“The swimming pool is what will make people come on weekends and stay on weekends or longer,” Mr Goodrich said.

The key to making the site financially viable is the installation of a 100kW solar system, plus 30 kilowatts of Ultra Capacity batteries, which will reduce the generator usage from 24 hours a day to one to two hours, a big bottom-line saving.

The focus on green energy will be a winner with southern visitors.

Mr Goodrich’s family have been in the pub business since 1845 when his great-grandfather, a squatter, owned the Kangaroo Point Hotel in Brisbane. His great-grandfather and grandparents also owned hotels in Coolah, Tambar Springs, Wallsend and Mayfield in NSW.