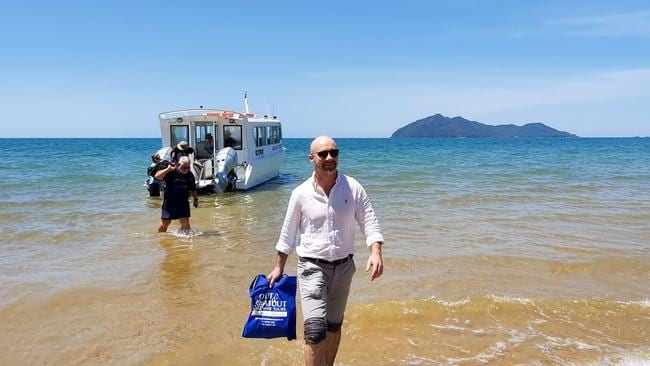 Melbourne-based investor James Mawhinney had ambitious, if overly optimistic, plans for a +$1B tourism and property development.

Encompassing hundreds of Mission Beach residential properties, occupying a council lease on the area’s famous Spit, and developing Dunk Island were the fundamentals of the plan.

When his related property investment company had reporting irregularities and was wound up however, Mawhinney has shown an unwillingness to scale down – a stubbornness that could be his undoing. The longer he waits for his many stakeholders to reach breaking point, the less control he has over various aspects of the development, and the more doomed it is.

The Tourism News implores Mr Mawhinney to cut his losses and scale down the tourism investment to ensure success, despite any hit to his pride that may cause.

Whilst it is not in an entrepreneur’s playbook to publicly admit mistakes, to suffer some consequences and downgrade expected returns, it’s surely better than keeping an entire tourism region tied up for years and risking collapse.

One of Mawhinney’s major stakeholders – the Bond Family – called in its rights as mortgagee in possession of Dunk Island and is willing to take back the island – the island is effectively back on the market, though Mawhinney, unable to rustle up payments, is still advertising development.

The Tourism News understands Mr Mawhinney also owns an island off Venice, a region crawling with value investors who would offer Mawhinney the flexibility and liquidity he needs to stay on top of the Mission Beach…mission.

They say the man who chases two hares catches none.

If Mawhinney holds onto his hubris, he may go down in history as the next Christopher Skase.

The Tourism News hopes James Mawhinney can scale back and become a long-term, valued member of the tourism development community, who will then be credited as a wise investor willing to make tough decisions – rather than just another blow-in to North Queensland who overplayed his hand.

Dunk Island, the crown jewel in the empire of upstart investment outfit Mayfair 101, has been reclaimed by the family of controversial energy entrepreneur Peter Bond.

The 59-hectare north Queensland property has been taken back only 11 months after Mr Bond’s family company sold it to Mayfair in a $31.5 million deal.

“Unfortunately, under the circumstances we have been left with no alternative but to foreclose,” Adam Bond, managing director of Family Islands Operations, told The Australian Financial Review on Tuesday evening.

“We have spent several months working with Mayfair in an attempt to engineer a solution. However, despite several extensions to payment terms Mayfair have remained unable to meet their obligations.”

Mayfair, whose other operations have been struggling, had used the Dunk Island purchase to springboard a flurry of media attention, using YouTube videos, Instagram influencers and politicians to promote a plan of revamping the island and creating a $180 million tourism mecca in surrounding Mission Beach.

But Mr Bond’s family had given vendor finance and taken a mortgage over the Dunk Island properties in the sale to Mayfair’s subsidiary Mayfair Asset Holdings.

Adam Bond, who is Peter’s son, said they recognised the “impact this decision may have on Mayfair investors and the Mission beach community. We can assure all concerned that this decision was not taken lightly or without other alternatives being thoroughly explored first.

“In our capacity as controller of the asset it is our intention to move quickly to ensure that Dunk Island can attract the right ownership to continue toward reopening and re-establishing its position as one of Queensland’s iconic destinations.”

The freehold property includes the island’s resort and is separate from a lease Mayfair has with council for the island’s Spit.

As the Financial Review revealed in March, Mayfairhad suddenly ceased settling on contracts for properties it had bought in the Mission Beach region, citing liquidity problems caused by the coronavirus pandemic.

A recent court judgment against other Mayfair entities also raised questions about who held security over some properties.

Now a real estate flyer has been issued around Mission Beach citing “many excellent listings for VACANT LAND”, which the Financial Review has confirmed relates to properties that Mayfair acquired.

The prices on blocks of land appear to be either the same or a dash above what Mayfair paid for them.

Mayfair declined to answer questions from the Financial Review on Tuesday.

“Our commitment to Mission Beach and Dunk Island remains unchanged. We hold a large portfolio of real estate and may choose to divest ourselves of certain properties from time to time in line with our business requirements,” it said on Monday.

Mayfair had proposed rejuvenating Dunk Island, which has been battered by cyclones. It was also going to purchase up to 238 properties costing about $150 million, with only about 130 having settled before Mayfair froze purchases.

According to an information memorandum titled “Project Paradise”, Mayfair’s vision was to create the “tourism mecca of Australia” and “the most sought-after island destination in Asia Pacific”.

“This will be achieved by developing a multi-layered, self-sustaining economy that attracts international notoriety,” it said.

Peter Bond founded underground coal gasification outfit Linc Energy, which was once valued at $1.1 billion but collapsed in May 2016.

Mayfair 101 founder James Mawhinney has vowed to fight on, saying the collapse of the IPO Wealth fund will allow him to devote more attention to his other investments, including an island off Venice and far north Queensland, where he is planning a $2bn tourism extravaganza.

“The outcome of the IPO Wealth matter now means that chapter is closed and we can now focus all our energy and attention on other investments, including Mission Beach and Dunk Island,” Mr Mawhinney told The Weekend Australian in an exclusive interview on Friday.

“We are continuing on with our plans for the rest of the Mayfair Group. It is unfortunate what has happened.”

Earlier this week a court ordered Mayfair 101 unit IPO Wealth Holdings to be wound up.

The order was made by Justice Ross Robson in the Supreme Court of Victoria after hearings in which the corporate regulator intervened. The court heard allegations that the fund operated like Ponzi scheme, with money from new investors used to pay those exiting.

Mr Mawhinney said IPO Wealth was worth $120m on March 1 but its value had been severely eroded since receivers and managers took over. The unit had invested in diverse assets, including India’s largest business-to-business payment company, as well as several IPOs, an Australian business creditor company and a couple of debt facilities.

“Since receivers and managers were appointed back in May there has been a huge amount of erosion of money, which is devastating for the unitholders. We have fought tooth and nail to keep it alive, but its structure has collapsed, which has left unitholders in a very dire position,” Mr Mawhinney said from his Melbourne home.

Meanwhile, the entrepreneur said he was working closely on the 107 residential properties Mayfair 101 has contracted to buy in Mission Beach, just south of Cairns, as well as his $30m acquisition of Dunk Island, just offshore.

“We are working closely with the provisional liquidators Grant Thornton and receivers McGrath Nicol to complete the refinancing arrangements so the project can continue,” Mr Mawhinney claimed.

Dunk Island’s vendor, Adam Bond, said the island was being prepared to return to the market.

“Effectively our position remains unchanged by the most recent developments,” said Mr Bond, managing director of Family Islands Operations for the Bond Group, in a statement to The Weekend Australian on Friday.

Mr Bond said he had engaged an agent and was in the process of preparing material for a public sales campaign.

“Obviously, from here on we would be happy to consider any serious offers put forward,” he said, but refused to provide a minimum purchase price.

“(However) if Mayfair 101 are in a position to complete in the near term that would be a good outcome.

“However, in light of recent appointments we have to be considering all options available to us as mortgagee in possession, including seeking expressions of interest from the market,” Mr Bond said.

Mr Bond said he had been in possession of the asset since July 15.

Meanwhile, nervous Mission Beach real estate agents yesterday claimed they were concerned the deposits held in a trust fund for the 107 residential properties Mayfair 101 had contracted to buy over the past year coul

d be pocketed by the receivers.

Holding a lot of deposits

“All of us agents are holding a lot of deposits from Mayfair,” said Steve Wiltshire of Mission Beach Real Estate, who has contracted to sell 25 properties to Mayfair 101.

“This money should go to the vendor. I am told the receivers can claw it back.”

Mr Wiltshire has sold properties ranging from just under $1m to around $8m to Mayfair. He is pleased that, should Mayfair not complete, he has found buyers for at least two of the properties, priced at $600,000 and $1.2m.

“In a few cases some (other) vendors (also) have buyers waiting to purchase the properties,” Mr Wiltshire says.

It is understood Mayfair 101 has paid deposits ranging from 1 per cent to 10 per cent on the contracted properties, and has paid far too much for some assets according to local sources, speaking on condition of anonymity.

Financial experts said yesterday it would be impossible for the receivers to take the deposits because the money was held in the real estate agents’ trust funds.

There were a range of possible outcomes, including the contracts ending and deposits being repaid to Mayfair, one source said.

There is hope for the tiny tourist hamlet where it is not uncommon for residential real estate to languish on the market for up to two years before being shifted.

“Good or bad, Mayfair 101 put us on the map. People had never heard of Mission Beach until all of this happened,” Mr Wiltshire said.