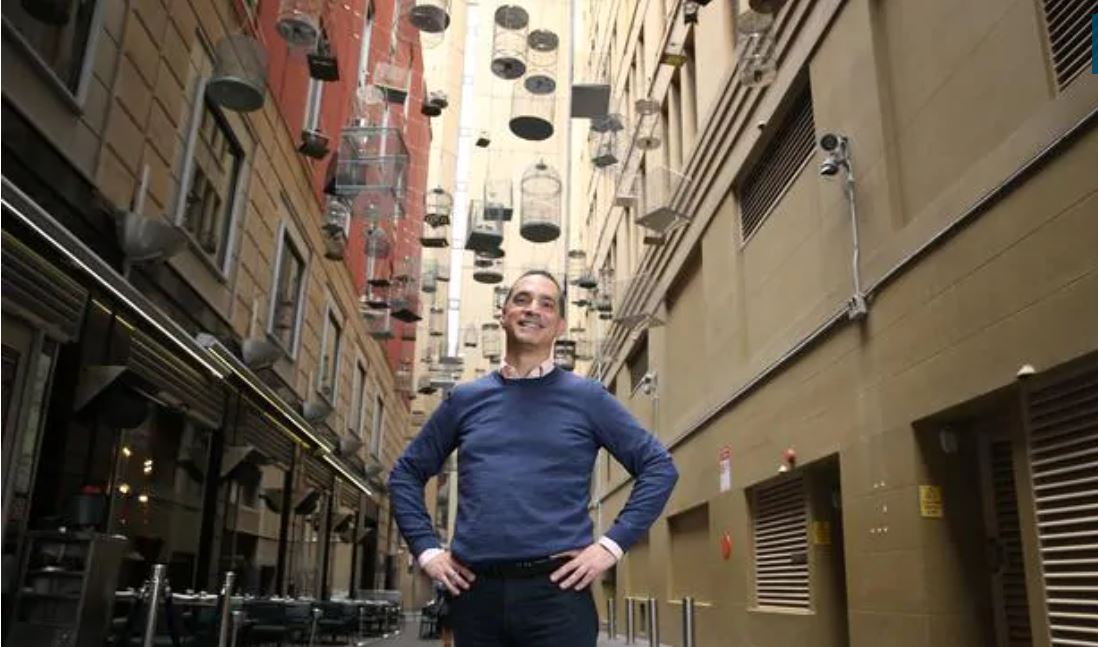 Australians now forced to choose their preferred Australian location are going where the heart takes them – and those ‘Cultural and Heritage’ tourists have always been the biggest spenders. #AustralianCulturalExports

From The Australian, 4th October 2020

The silos rise like sculptural forms from the dead-flat plains of Victoria’s Wimmera-Mallee. Once their only function was grain storage; now they are oversized cylindrical murals, commanding the landscape with pictures of human figures and other creatures. The Silo Art Trail — with spectacular sites at Brim, Rupanyup, Sheep Hills, Rosebery, Patchewollock, Lascelles and Nullawil — has been part of a creative revival of a region better known for grain and sheep.

Sally Gebert, who with husband Kevin runs the Creekside Hotel at Warracknabeal, says the silos brought a massive influx of tourists after the trail opened in 2015, with busloads of tourists, families on holiday and grey nomads regularly stopping by. That was before the pandemic and border closures shut down interstate travel. “Everybody cancelled,” Gebert says. “As soon as the lockdown happened, the tourists stopped coming.”

Another business in the tourism industry also has been affected by the pandemic. Renaissance Tours is a local company that organises expert-led small tours to the world’s great concert halls, opera houses, festivals and galleries. When the global financial crisis hit in 2008 and people were reluctant to travel overseas, the company switched its offering and organised tours to events such as the Adelaide Festival and the Australian Festival of Chamber Music in Townsville.

Something similar has happened with the pandemic. Managing director Evan Petrelis says Renaissance Tours has cancelled or postponed international and interstate tours. Instead, the company is taking bookings for short breaks and local day trips — tours of art deco Sydney, for example, and a three-day visit to galleries and artist studios in the Illawarra region. Demand has been strong, and Petrelis says the company in September had its best month of new bookings since 2018.

Before last summer’s bushfires and the global pandemic, cultural tourism was a large and growing part of the nation’s $146bn tourism industry. Different studies have different figures, but roughly half of all international visitors experience some of Australia’s arts and cultural attractions while they’re here — attending theatres, concerts and festivals, visiting galleries and museums, or experiencing Indigenous arts and culture.

Arts tourists stay longer, and therefore spend more, than other international visitors. A 2018 study by the Australia Council for the Arts says inbound tourists spent $4841 on average, compared with other tourists who spent $3531.

Overall spending by arts tourists increased by 55 per cent in the years since 2013, a faster rate of growth than for other visitor segments.

The picture is similar for domestic arts tourists, who spend an average $1068 on a five-night stay, compared with other domestic travellers who stay an average 3.5 nights and spend $685. People who want to experience Indigenous arts spend more again, $1558 per trip on average, probably because of the time and distance involved in reaching some remote art centres.

Now, as some state borders start to reopen, and visitors from New Zealand are due to start arriving in NSW and the Northern Territory from October 16, cultural tourism is positioned to be an important part of the tourism industry’s post-COVID revival — although it does depend on venues such as galleries and theatres being able to open their doors.

“The arts are a vital part of what makes up the attraction of so many destinations,” says Margy Osmond, chief executive of the Tourism & Transport Forum. “They are probably the top-of-the-list reason why you get return visitors to a whole range of destinations. People go back to see new exhibitions and new shows.”

And it’s not only the metropolitan areas, with their state galleries and performing arts centres, that draw the visitors.

“People often don’t clock the impact that the arts has on regional tourism and regional development,” Osmond adds. “It’s quite often the reason why someone decides to go away for a weekend, because there’s a great gallery, or a terrific venue, or their favourite band is playing. It’s a mistake to think that the cultural industries are only invested in major urban centres. Couldn’t be more wrong. People take the arts and cultural communities for granted at their peril.”

Attractive places to live — with cultural and sporting facilities, parklands and transport — also are attractive places for tourists to visit, and it’s partly for this reason that governments are investing in cultural events and infrastructure.

There’s a cultural building boom happening around the country, with new galleries, museums and theatres in the pipeline or under construction, from the new Western Australian Museum due to open in Perth next month, to the 1500-seat theatre being built at Brisbane’s QPAC, and the new Sydney Modern gallery being built next to the Art Gallery of NSW.

Major exhibitions, musicals and festivals also drive cultural tourism, and state governments sometimes compete to anchor premium events in their capital cities, such as Hamilton in Sydney, and Moulin Rouge! in Melbourne, both due to open next year.

South Australia has built on its reputation as the Festival State and offers a raft of events across the year. The Adelaide Festival is the country’s pre-eminent showcase of international performing arts, and the city’s Fringe is second only to Edinburgh’s in scale. Adelaide’s 11 festivals — others are WOMADelaide and the Adelaide Cabaret Festival — together brought more than $109m of “new money” to the state in 2018.

The value of cultural tourism to state economies and to the nation has perhaps been under-recognised and the nation’s cultural assets have not fully been exploited for marketing purposes.

It’s not always obvious, from the images of Australia tourism bodies choose to project on the world stage, that the arts are something visitors want to experience.

Australia’s international campaigns tend to focus on our attractive but hardly unknown attributes. Last year’s “Matesong” campaign featuring Kylie Minogue — a $15m pitch to British travellers, pulled when the summer’s bushfires were engulfing large parts of the country — had plenty of sandy beaches, cricket and quokkas, but the only reference to the fine arts was a two-second glimpse of an Aboriginal art gallery.

Last year, Tourism Australia entered into partnership with 18 culture and heritage destinations to form Cultural Attractions of Australia. The industry-led collective was formed in recognition that the nation has more to offer visitors than sport and the great outdoors. The portfolio includes the Australian War Memorial in Canberra, David Walsh’s Museum of Old and New Art in Hobart and the Sydney Opera House, the nation’s most visited tourist attraction, bringing 10.9 million people to its environs a year.

CAA is helping to change the narrative about Australia’s cultural offerings, in part by helping cultural organisations position themselves as tourist attractions.

“People had a very narrow perspective of what the arts and culture are,” says CAA chairwoman Jennifer Ganske. “What happened is that people started to become curious about Australia’s personality. We started to become known for more than being larrikins and having marsupials and beaches. It started to bring home that we have the world’s oldest living cultures, and a really interesting melting pot of cultures.”

Tourism Australia also has highlighted Australia’s unique First Nations cultures as reasons for visitors to see the country. Its Discover Aboriginal Experiences program offers opportunities for visitors to explore ancient rock art sites and taste bush tucker under the stars. It is a substantial part of cultural tourism, with about 1.4 million international visitors seeking out Indigenous tourism experiences last year, according to Tourism Research Australia.

The coronavirus lockdown in March swiftly shut down cultural and tourist destinations, threatening the future viability of operators in both industries. The absence of international tourists for a year will leave a $45bn hole in the local industry that cannot be filled by domestic tourism alone. Ganske expects that cultural tourism operators will focus on their immediate domestic markets: local communities and travellers within each state.

Perhaps because of the pandemic and the widespread disruption to travel and leisure, the contribution of our arts and cultural sector to the tourism industry, and to the economy generally, is becoming clearer.

“I think that’s one of the reasons that governments are paying attention now,” says veteran music promoter Michael Chugg. “We are a huge contributor to accommodation, travel, restaurants. When you have a major event, a concert, everyone goes to the restaurants near the shows, people come from out of town on tour buses, or fly to their favourite festival, like Splendour or Bluesfest. The impact that our industry makes on the economy of the country is enormous.”

While the impact of coronavirus on the arts and tourism has been devastating for many businesses, a happier outcome of the crisis may be greater co-operation between the two industries in the long term. No less significant, particularly for the cultural sector, is recognition of the value that different parts of the experience economy — the arts, hospitality and tourism — can deliver when working together in concert.

“It’s like governments have had an epiphany about how important these groups are,” says TTF’s Margy Osmond. “Collaboration has probably been one of the most positive outcomes. We have all worked hard to work together. We symbiotically help each other in the normal course of business but, going forward, I think we will be a stronger force together than we might have been separately.”

In Warracknabeal, Gebert says visitors are starting to return after the easing of restrictions in regional Victoria, but she does not expect many interstate visitors until March next year. “We are getting a lot more Victorians seeing more of Victoria,” she says. “Regional people are travelling, so it’s a different crowd. It’s nice to see locals supporting locals.”