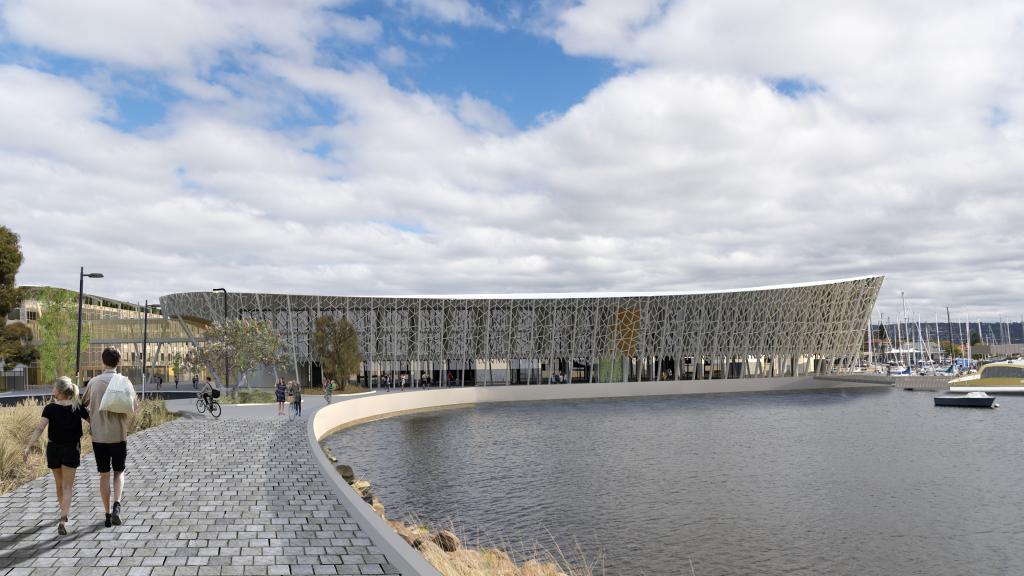 The Chinese company behind controversial plans for a tourism and hospitality training school on Hobart’s waterfront has pledged to come up with another development for the site if its original $80 million proposal proves unviable.

Chambroad has asked Clarence Council for an extension on its plans to build the combined training school and hotel at Kangaroo Bay, about 10 minutes from Hobart’s CBD, blaming coronavirus for its inability to get started on the project first proposed in 2015.

Aldermen will meet on Monday evening to discuss a confidential update on the plans.

Greens MP Rosalie Woodruff said she was worried the council would vote to give Chambroad an “open extension” to allow for a development different to the plans first approved by the council in early 2017.

Several sources have confirmed the company has offered to come up with a “Plan B” in exchange for holding on to the parcel of land.

“The community has fought this development from the beginning,” Ms Woodruff said.

“What they don’t want is an extension to be given to the company for the land to sit vacant for an unknown purpose for an indefinite period of time.”

Clarence alderman Tony Mulder said he would need a lot of persuading to grant the two-year extension requested by the company.

He said the council could choose to buy back the former Crown Land site valued by the State Government at $2.5 million.

“I haven’t had one person contact me that has written to say, ‘We should give them the extension’,” Mr Mulder said.

Clarence Council Mayor Doug Chipman declined to comment, but said a “full report” on the development would be uploaded to the council’s website on Thursday.

Chambroad is yet to lock in partners to deliver training courses or the promised five-star hotel.

With a tight vote on the extension expected at a public meeting, the council has taken the unusual step of allowing an alderman in home quarantine to vote on the matter remotely.

Alderman Luke Edmunds said he supported having his council colleague Brendan Blomley attend the meeting virtually but questioned the timing of the rule change.

Mr Blomley will text and email his votes from the October 12 council meeting to Mr Chipman and the council’s general manager.

He said it was the appropriate course of action in what were “exceptional circumstances”.

“I’m not going to allow myself to be disenfranchised because I made a decision to travel to Sydney to spend time with my children,” Mr Blomley said.

“I was elected to do a job and I’m going to do that job.”

Mr Edmunds said he supported having his council colleague participate in the meeting remotely but questioned the timing of the rule change.

In June, Mr Edmunds planned to move to allow for virtual attendance of council meetings as part of a broader motion related to coronavirus measures but dropped the clause due to a lack of support among his colleagues.

Remote voting was given the green light on Friday thanks to general manager Ian Nelson’s interpretation of State Government coronavirus laws rather than a vote of aldermen.

“I said to the mayor and general manager, ‘Have you considered how this will look?’,” Mr Edmunds said.

“The first time we will see the policy in effect is for the biggest decision this year.”

Calls for council to drop the development

Ms Woodruff has urged the council to vote to take back the Kangaroo Bay site and open tenders for a new proposal.

“It’s really concerning that this is all being kept in the dark,” she said.

“It’s pretty clear that Chambroad is unable to meet the requirements of the proposal that was approved by council, so this really should be dropped.”

“We’re aware of the challenges that that particular project faces and we hope that Clarence City Council and Chambroad are able to overcome their issues, so we can see an exciting tourism and hospitality training school built which will also result in jobs during construction,” he said.

From News Corp Australia and RealEstate.com, 10th May 2018

An artist’s impression of the proposed hotel development for Kangaroo Bay at Bellerive. Picture: HUNTER DEVELOPMENTS

THE company behind a proposed hotel and hospitality training school at Bellerive has acknowledged residents’ concerns about the project.

But Finely Zhang, overseas investment deputy general manager for Chinese company Chambroad, said it was a chance for Tasmania to have the world’s best hospitality training.

A presentation to about 100 University of the Third Age members in Hobart on Thursday was the first time the company had discussed its plans publicly.

Mr Zhang was joined by architect Robert Morris-Nunn, whose company is designing the proposed development.

Mr Zhang said he was aware of community concern about the project.

“Tasmania’s not like any other state in Australia, or in the world. The nature is fantastic,” he said.

“I don’t want to jeopardise any of the nature.”

Mr Zhang said the development was “for the future”.

He said he wanted the hospitality school, which would be linked with the site’s world-class hotel, TasTAFE and the University of Tasmania, to be the best in the world.

“We say the hotel is actually subsidiary to the training [school] … but the hotel itself has to be a fantastic hotel,” he said.

Professor Morris-Nunn said Chambroad was “not your average Chinese investor” and drew on Confucian principles.

He said Chambroad was engaged in petrochemicals, technology and education, culture and art, environmental protection, agriculture and real estate.

Prof Morris-Nunn said Hunter Developments had development rights for Kangaroo Bay when Chambroad said it was interested in the site.

He said the companies were now working together on the project, with Hunter Developments as architects.

The development also includes plans for garden courtyards and shops.

Community group Kangaroo Bay Voice opposes the development over lack of consultation, its size and increased traffic, among other concerns.

An appeal against the development from Bellerive resident James Lockley was heard by the Resource Management and Planning Appeal Tribunal earlier this year.

In February the tribunal decided to add more conditions to the planning permit for the project.