Boats put to (science) work on the unsurveyed reef 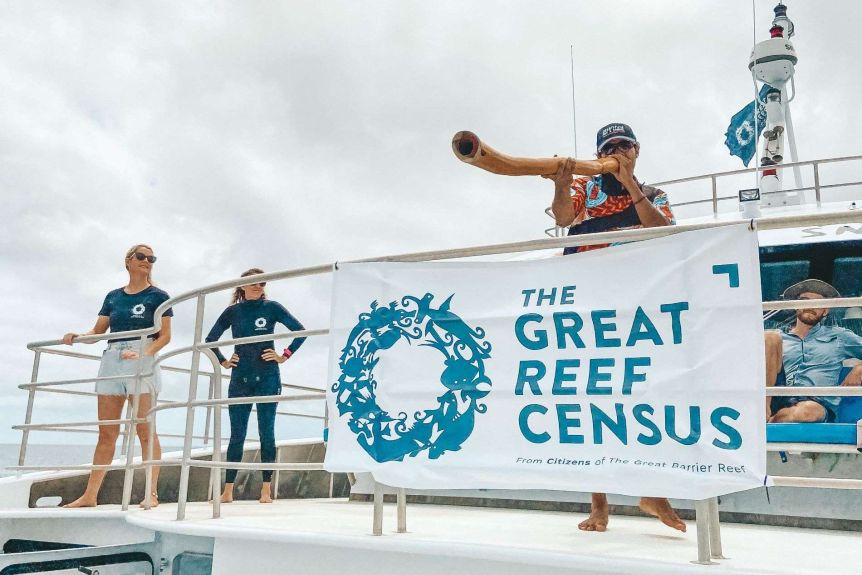 Whilst there’s no international tourists, scientists have gamefully employed tourism boat operators to do the largest census ever of the Great Barrier Reef.

(Quote) “Mr Ridley said many people around the world started believing the Great Barrier Reef was beyond saving after the mass bleaching events of 2016 and 2017.

“I actually think they were damaging, not just for tourism, but for conservation as well, because if people think the reef is dead they have a tendency to give up,” he said.”

In fact, so little of the Great Barrier Reef has been properly surveyed before now that there was little evidence of widespread damage.

(Quote) “Comprised of more than 4,000 individual reefs over a distance of 2,300 kilometres, the Great Barrier Reef is the world’s largest reef system.

“Less than 5 per cent was regularly surveyed, and as much as 40 per cent had never been surveyed.”

A flotilla of tourist boats, fishing vessels and superyachts is conducting a world-first census of the Great Barrier Reef.

Conservation group Citizens of the Great Barrier Reef has recruited more than 30 vessels to help survey up to 150 ecologically significant reefs, from the tip of Queensland down to Lady Elliot Island, over the next 10 weeks.

Chief executive Andy Ridley said a “sharing economy” approach was the only way to obtain a big-picture snapshot of the health of the reef.

“If you wanted to survey the reef you’d need a billion-dollar research fleet and this is a way of creating one out of the sum of all the parts,” he said.

“It’s using every available asset that we can get our hands on — every tourism boat, every dive boat, every liveaboard, superyacht, white boat, research vessel, and island operation.”

Snorkellers and recreational divers can carry out the surveys, which involve swimming along a reef and taking a photograph every 10 metres.

University of Queensland marine ecology professor Peter Mumby, who helped devise the survey, said it was aimed at identifying “priority reefs” that were key sources of coral larvae.

“What we need is to find where are the reefs that are most important in driving recovery today,” he said.

“For that we need large-scale reconnaissance on as many reefs as possible.

“Those priority reefs, once identified, could be then considered for alternative or maybe greater protection in the short term, to help safeguard that recovery process.”

Three years in the making

Comprised of more than 4,000 individual reefs over a distance of 2,300 kilometres, the Great Barrier Reef is the world’s largest reef system.

Less than 5 per cent was regularly surveyed, and as much as 40 per cent had never been surveyed.

Following the mass bleaching events of 2016 and 2017, Mr Ridley, Dr Mumby and Roger Beeden, a Great Barrier Reef Marine Park Authority director, discussed how the gap might be filled using existing assets that crisscross the reef.

The idea for the Great Reef Census was born, and after a successful pilot last year, the project was officially launched today.

Dr Mumby said aerial surveys showed whether reefs had bleached, but not if they had recovered, and detailed in-water survey data was only kept on a relatively small number of reefs.

“There’s no way that scientists are able to keep tabs on a very large number of reefs,” he said.

“The sort of information we need isn’t that complex and is well within the capabilities of most citizens, so this is a perfect match of an important task that can be undertaken by the public.”

“As the traditional resources of science and marine park management become increasingly stretched, ‘citizen science’ approaches – such as the Great Reef Census – are growing in importance to help us maintain a spatially adequate and up-to-date information base for management,” he said.

Citizens of the Great Barrier Reef hoped to further scale up the census in 2021 to reach 300 to 500 reefs by involving recreational boaties.

‘The reef is not dead’

The survey photographs will be uploaded online next month for citizen scientists around the world to help analyse.

Project science coordinator and James Cook University researcher Katie Chartrand said one of the goals was to get the public invested in the future of the reef.

“Especially in these days of COVID, where people can’t come see this beautiful iconic reef for themselves, it allows them to have an understanding or appreciation for the nuanced nature of the reef,” she said.

Mr Ridley said many people around the world started believing the Great Barrier Reef was beyond saving after the mass bleaching events of 2016 and 2017.

“I actually think they were damaging, not just for tourism, but for conservation as well, because if people think the reef is dead they have a tendency to give up,” he said.

He hoped the census would be on the vanguard of a 21st century approach to conservation whereby science, industry and grassroots participants collaborated on a new level to solve problems.

Dr Mumby said the future of the reef required “concerted action” on greenhouse gas emissions, but other actions such as reducing pollutants or trying to control crown-of-thorns starfish were also important.

“We need both of those things in order to give the reef the future that we would like it to have,” he said.

The Australian Government’s Reef Trust and Great Barrier Reef Foundation, the Prior Family Foundation and the Reef and Rainforest Research Centre are funding the census.