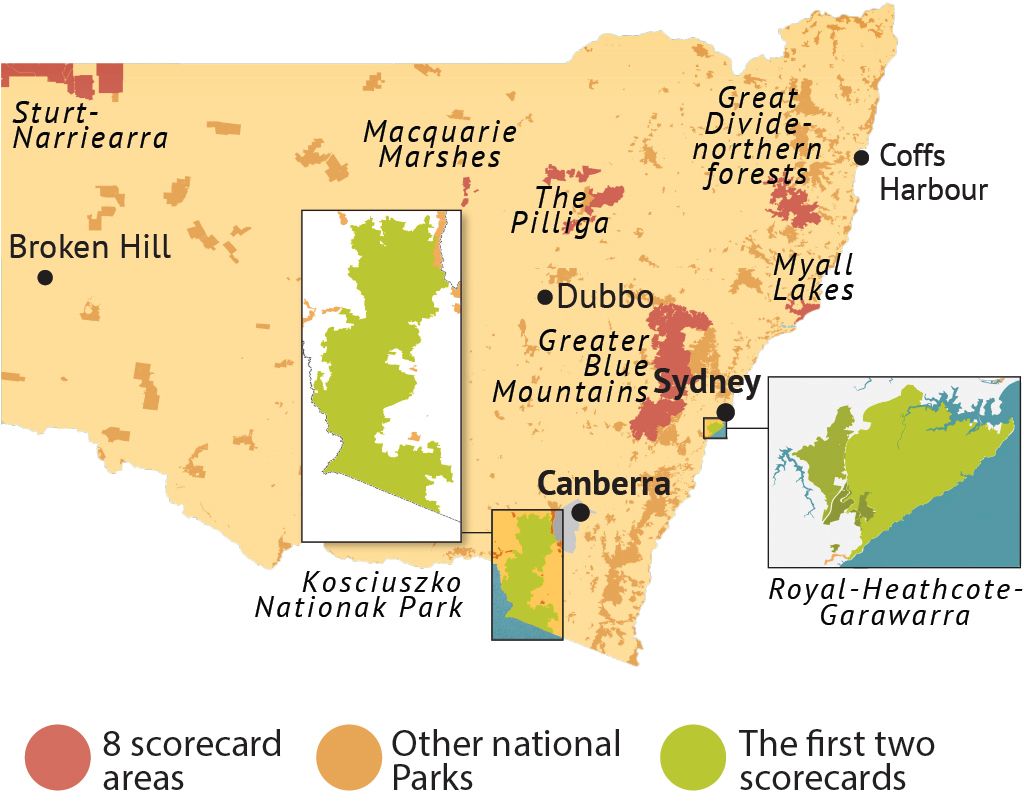 The cliche of ‘Progress stopped because of a last minute tree-frog’ could soon be a thing of the past, A $10 million program developed by two ecologists to boost science and park management will allow the public to be able to track the health of feral deer’s in the royal national park and corroboree frog in the Kosciuszko national park, the scorecards will later be extended to regions including the Blue Mountains, the Macquarie Marshes and the arid far north-west.

The aim was to have the first scorecards finished by the end of 2022, setting a standard for combining monitoring, accountability and transparency unmatched in Australia or elsewhere.

Are feral deer numbers rising in the Royal National Park? How about the fate of the southern corroboree frog found only in the Kosciuszko National Park? Are taxpayers’ dollars to limit one and boost the other species being well spent?

For the first time, the public will be able to track the health of those two key conservation areas as part of a $10 million program to boost science and park management. Developed with two leading ecologists, the scorecards will later be extended to six other protected regions including the Blue Mountains, the Macquarie Marshes and the arid far north-west.

“We need to know if the measures we are undertaking – whether feral pest and weed control or the management of fire – are improving outcomes for our native plants and animals, many of which are threatened with extinction,” NSW Environment Minister Matt Kean said.

“Our parks are facing many challenges, like climate change, that will affect their future ecological health,” Mr Kean said. “It is imperative we put the right tools in place now, so we can track and protect them for future generations.”

Atticus Fleming, Deputy Secretary of the National Parks and Wildlife Service, said the aim was to have the first scorecards finished by the end of 2022, setting a standard for combining monitoring, accountability and transparency unmatched in Australia or elsewhere.

“No one in the world has really nailed this,” Mr Fleming said. “I’m hoping we’ll be among the first to do it.”

The introduction of the scorecards also marks a change of course for the government. After shearing off most of the scientists within National Parks and Wildlife Service and placing them in other units or letting them go, the department is again hiring ecologists and other specialists.

The selection of two outspoken academics – Richard Kingsford from the University of NSW to lead a team to help draw up the Royal National Park’s scorecard, and David Lindenmayer from the Australian National University leading a similar group for Kosciuszko – also gives the program credibility, say insiders not authorised to speak publicly.

Professor Kingsford said the reports would provide evidence-based methods to “track how the things we care about are doing”.

The Royal National Park and adjacent Heathcote and Garawarra conservation areas “encapsulate a real hotspot of biodiversity”, ranging from heathlands to rivers and rainforests as well as great vistas for visitors from Sydney, he said.

Just as economists use inflation or unemployment to inform policymaking, data collection to monitor the numbers of threatened species of plants, or of feral threats, is vital and often under-resourced.

“We’re just very not good at doing that within an environmental context,” Professor Kingsford said.

Brendon Neilly, Area Manager for the Royal National Park, said the park alone was home to about 1100 vascular plant species compared with about 450 in the entire United Kingdom. These species include the mint-bush, identified last winter in the park by a citizen scientist for the first time in almost 50 years.

“There are large areas of vegetation that are relatively undisturbed” despite the proximity to a city of about 5 million people, Mr Neilly said.

Created in 1879, Royal was the world’s second national park, trailing only Yellowstone in the US, created seven years earlier.

Jody McGill, a ranger for the Heathcote National Park, said she “was so excited to have [the additional scientists] out on the ground”.

A scorecard system could also help educate the public about both the parks’ assets, but also the need to care for it. Invasive weeds, for instance, often washed into the area by people nearby. “We have a saying, ‘the drain is just for rain’,” Ms McGill said.

Professor Lindenmayer said the scorecard approach offered the chance “to give us a chance to look under the bonnet” at what was working and not within national parks.

“Kosciuszko has its problems like every place,” he said. “It’s also a pretty amazing place with many intact parts.”

At 690,000 hectares, Kosciuszko is the largest national park in NSW. Apart from the well-publicised threat from mounting numbers of horses and other feral animals, the park also faces challenges such as dieback in snow gum forests caused by beetles.

A scorecard would allow the public and researchers to see how long it takes for a conservation measure, such as horse removal, to deliver results and for the threatened wildlife, such as the southern corroboree frog, to respond.

“This is ambitious and exciting but we want to make sure we get this right,” Professor Lindenmayer said.

Plotting the region’s eco-health could have other benefits too.

“We may find parts of Kosciuszko are really important climate refuges as the world heats up,” he said.