Artists view from above ripe for airport towns 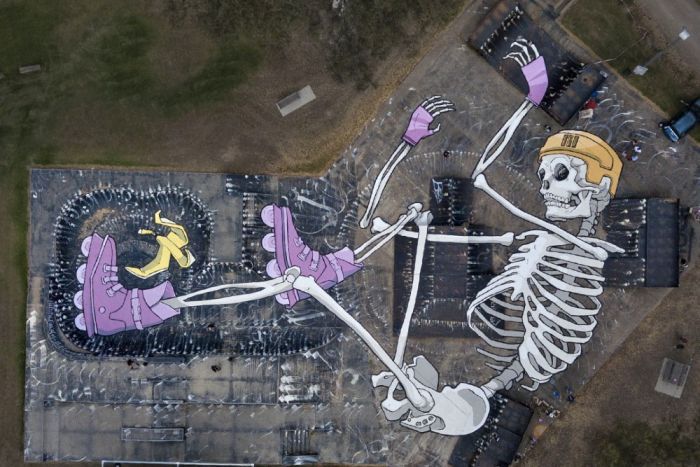 Got space? This artist creates large scale aerial view murals with a drone and a paint roller.

While silo murals have taken the spotlight in recent months, one Australian artist is leaving his mark where you’d least expect it … under your feet.

Melbourne-based artist Kitt Bennett chose a small regional town to be home to one of the few murals he paints each year on this scale.

Mr Bennett can paint walls and sketchbooks, but he’d prefer your floorspace.

Don’t worry if it has sheds, rails or trees in the way, he’ll work around the obstacles.

Take for example Mr Bennett’s latest canvas — a skatepark in the South Australian town of Millicent.

His one guideline from the local council: it had to be water or wind-themed.

“I thought some sort of sea creature and there’s a lot of obstacles in this park, a lot of transitions and things so compositionally I thought a squid could be moved around and fitted in to try to cover as much of the park as possible.”

A picture shows a thousand pictures

Mr Bennett wants his audience to enjoy the fruits of his labour from a number of angles.

His creations keep both drone pilots and landlubbers happy.

“I try to make them look good from ground level but then as well you’ve got that aerial shot so there are two types of perspective you get.

“I think kids like running around and trying to figure out what it is and then you get that final shot from above and it all makes sense and you go, ‘Oh, it’s a squid’,” Mr Bennett said.

While his unique designs have garnered worldwide attention, local councils are slowly coming around in commissioning Mr Bennett’s style.

“I’m getting more and more interest in it,” he said

Mr Bennett agreed to the trip across the border when local community group Imagine Millicent got in touch earlier in the year.

The fact that it was a skatepark helped his decision.

“I’m a bit of a skater myself … I’m always interested in painting skateparks so I can have a bit of a roll as well.”

Recently dubbed ‘squid park’ by locals, Millicent’s new fishy resident has been especially popular with kids and teenagers who frequent the park.

After securing international street artist Fin DAC, Millicent had to farewell the opportunity when an online backlash from some locals put a dent in the project.

Moira Neagle from Imagine Millicent said she was very happy when Mr Bennett agreed to transform the skatepark.

“We can see that increasing the aesthetics of our town is good for us but it’s also inviting to tourists to come and see our town.”

It was an opportunity the city-based artist wasn’t going to pass up.

“It’s always good to bring something new to a place like this that hasn’t got a lot of it or is wanting to get more,” Mr Bennett said.

“[It] gets the ball rolling, gets people interested in this kind of thing … [and] be more open to this happening in their town.”