In Attractions, Harmonisation, Media and Communications 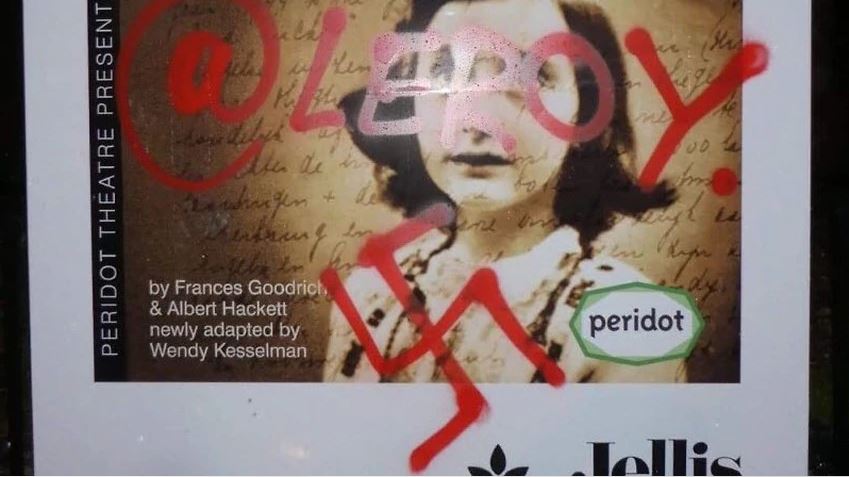 It’s not known if a swastiki graffitied onto an Anne Frank poster was genuine anti-semitism or just a jerk named Leroy trying to get noticed. We expect the latter.

A small Melbourne theatre company says it is “disgusted” a billboard promoting its production of The Diary of Anne Frank was vandalised with a swastika over the weekend.

A community theatre company in Melbourne has hit out at vandals for spray painting a swastika on a billboard promoting its production of The Diary of Anne Frank.

Peridot Theatre Company, based in the eastern Melbourne suburb of Mount Waverly, posted to its Facebook page early Sunday morning to say it was “UPSET, ANGRY [and] DISGUSTED” by the incident.

The graffiti, which the company has since cleaned, was sprayed less than 24 hours before opening night.

“This action is sickening,” the company wrote.

“Anne wrote: ‘I keep my ideals, because in spite of everything I still believe that people are really good at heart.’

“We are honoured to tell Anne’s story. We say NO to hate.”

The Diary of Anne Frank is a book of writings from Anne Frank, one of the most well-known Jewish victims of the Holocaust, while hiding with her family during the Nazi occupation of the Netherlands.

Peridot said it received support from the local community after posting about the incident, and Sunday afternoon’s matinee performance “was virtually sold out”.

“The despicable vandalism just underlines the fact that stories such as Anne Frank’s still need telling.”

It comes months after posters of Treasurer Josh Frydenberg were defaced with anti-Semitic symbols in the same area.

Hitler moustaches, devil horns and the words “right wing facist (sic)” were spotted on posters of Mr Frydenberg, who is Jewish, in his Melbourne electorate of Kooyong two weeks before May’s federal election.

Chairman of the Anti-Defamation Commission Dr Dvir Abramovich said: “This shameful and cowardly desecration of Holocaust remembrance is clearly driven by hate-mongers and bigots who wish to destroy Anne Franks’ enduring legacy and her words of courage and hope that have inspired so many around the world.”

“This is also an attack on the memory on the 1.5 million Jewish children murdered by the Nazis and will shock the conscience of every Australia,” he said.

“As we know, there are still individuals with evil in their hearts walking in our midst, who seek to target Jews and denigrate the Holocaust, using the devil’s tools of intimidation.

“These despicable and chilling incidents of antisemitism and swastika vandalisation, that are spreading like wildfire throughout Melbourne, are of grave concern and point to the the dangerous uptick in prejudice and intolerance infecting our nation.

“Now, more than ever, we need to ensure that educational programs about the Holocaust and the dangers of racism are widely taught in schools.

“We hope that the perpetrators of this ugly campaign are identified and are dealt with to the fullest extent of the law.”