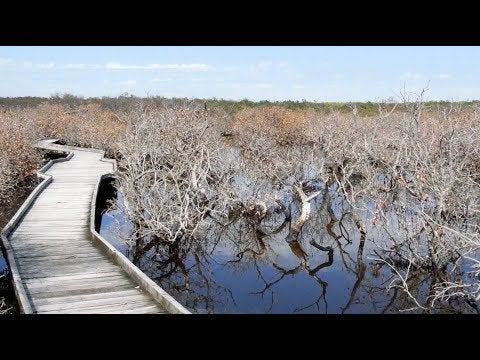 State government documents have revealed that the Salisbury Council waited 5 months to inform the Environment and Water Department of the death of mangroves at St Kilda and that the department took 2 months to do their assessment.

Related Community:Concerns our parks will be turned into cash cows

Salisbury Council did not inform the Environment and Water Department of the death of mangroves at St Kilda until five months after it first noticed the issue, and the department then did not make an initial assessment of the die-off for a further two months, state government documents reveal.

The Freedom of Information papers about the mangrove dieback, obtained by the Opposition, also show the amount of water made available by SA Water to dilute hypersaline water stored at nearby Dry Creek Salt Fields ponds had reduced by half in the months leading up to the discovery of the dead trees.

Labor is calling for an independent investigation into the matter, saying the government appeared to be culpable for the mangrove deaths through “negligence and inaction”.

About 10ha of mangroves and 35ha of saltmarsh died in 2020 after disused and dry salt evaporation ponds were filled with hypersaline water and then slowly leaked.

It is estimated more than 150ha of vegetation remains stressed. A drone image reveals the extend of the dead and dying mangroves and saltmarsh at St Kilda, where super salty water can be seen in evaporation ponds. Picture: Alex Mausolf – St Kilda Mangroves

The Environment and Water Department is responsible for the care of the St Kilda mangroves.

Salt mining company Buckland Dry Creek, which owns the salt field, manages the saline levels in the evaporation ponds by diluting the water with flows from the Bolivar wastewater plant before it is discharged into the ocean.

However, the documents showed the success of SA Water’s Northern Agricultural Irrigation Scheme resulted in a reduction of water discharged from the Bolivar plant, which in turn reduced the amount of flows available to dilute the pond water.

The papers stated in October 2019 the flow rate from the Bolivar plant was about half the rate it was at the same time the previous year, and in order to comply with maximum discharge salinity levels, Buckland Dry Creek reduced its discharge volumes to about one quarter to one half of its previous volumes.

As a result, salinity levels in the ponds were expected to exceed previous years’ levels.

The documents warned without preventive measures being put in place, the increase in salinity would result in an inability to discharge “meaningful quantities” of hypersaline water at the height of summer and lead to non-compliance with requirements relating to bird habitat protection in the salt field.

There was also a high risk of salt crystallisation in ponds.

In response to this, in February 2020, a section of the salt fields, which stretches about 25km along the coast, was refilled with seawater to manage the salinity levels.

Dead and dying mangrove and saltmarsh habitat around the St Kilda boardwalk in the Adelaide International Bird Sanctuary National Park is in urgent need of attention, as the cancer is spreading. The State Government says initial observations and…
It informed the Environment and Water Department of the matter on July 14 that year.

A council spokesperson said the council initially noted some isolated mangrove dieback and monitored the area before alerting the department to the situation.

The spokesperson said the council informed the department “after determining that there appeared to be a more systemic and concentrated deterioration in the health of the mangroves”.

The department sent a National Parks and Wildlife Service SA ranger and an independent consultant to the site to make an initial assessment on September 17 however the site was locked so they returned the next day to complete the task.

A department spokesman said a department staffer contacted the council to discuss the matter the day after it was alerted to the death of mangroves along a section of the boardwalk.

“The circumstances that led to the mangrove die-back is still under investigation,” he said.

An SA Water spokesman said there were factual errors in the government documents and while the Northern Adelaide Irrigation Scheme was expected to impact the Bolivar flows, it had not started to have an effect in October 2019.

He said SA Water had never informed Buckland Dry Creek it needed to cease discharging the hypersaline water via the Bolivar outfall channel and the agency continued to allow this practice to take place.

“With the first NAIS customer only beginning to receive recycled water through this system in November 2019, the scheme could not have had any impact on the flow rate of treated wastewater from the Bolivar Wastewater Treatment Plant in October 2019,” the spokesman said.

“In fact, the average flow rate of treated wastewater from the Bolivar Wastewater Treatment Plant in October 2019 was 20 per cent higher than in October 2018, with a total of 41 gigalitres in 2019-20 compared to 37.7 gigalitres the year before.”

Opposition environment spokeswoman Susan Close said the “government appears culpable for the die-off through negligence and inaction” and she called for an independent investigation into the matter.

Ms Close said the government did nothing to manage the impact of the reduced Bolivar flows to dilute the hypersaline water and ”when the environment department heard about the mangrove die-off it did nothing for two months”.