Music and fine art collided to get Hobart humming 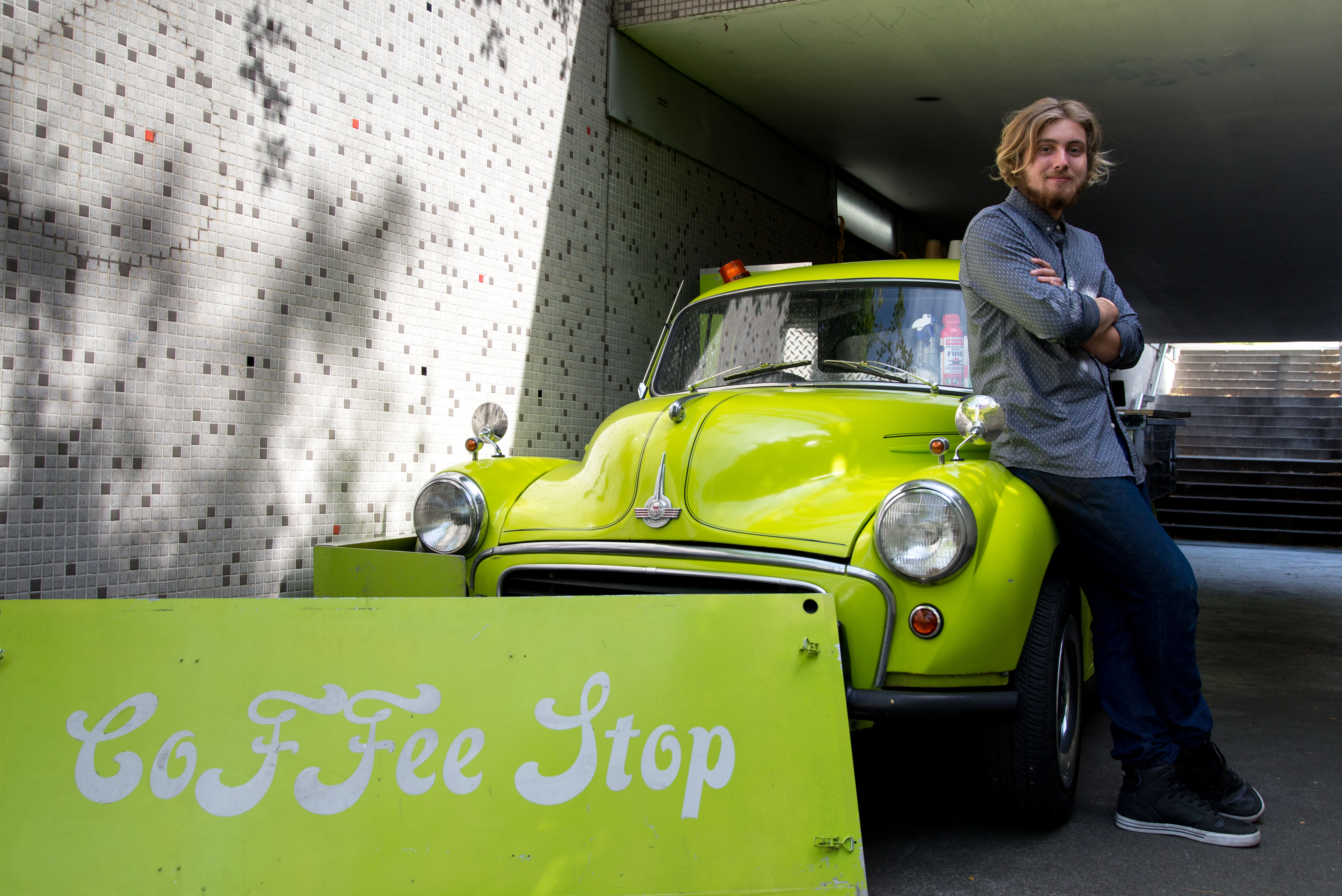 When Brian Ritchie of the Violent Femmes and David Walsh of MONA museum decided to invest in Hobart, Hobart operators were warned they had a five year window to impress the public… and the city turned their investment into a $719m p/a tourism windfall.

Five years ago the acclaimed Museum of Old and New Art opened on the outskirts of Hobart. Since then it has changed how Hobart is viewed both from within and without, and prompted the small capital to lift its game.

Chapter I: The five-year window

Before 1997, the drab industrial city of Bilbao in northern Spain was a complete non-entity to tourists who flocked to Barcelona, Madrid and Seville.

Then the dazzling Guggenheim Museum arrived and Bilbao’s fortune and standing went through the roof. The phenomenon was called the ‘Bilbao effect’

Five years ago this month, the Museum of Old and New Art, aka MONA, opened in Hobart, and now Australia’s southernmost capital is enjoying its own art-inspired renaissance.

MONA was not just another gallery. David Walsh’s exhibit was renegade stuff, put together with such audacious nous that its shocking brilliance won critics over wholesale.

Since opening, 1.7 million people have walked through MONA’s doors – 2,500 a day at its peak. For the small capital city of Hobart, and Tasmania, the tide of MONA traffic has been a complete game changer.

In the first two months after MONA opened, Hobart-related traffic on Hotels.com spiked 40 per cent, and the search figures kept on rising rapidly.

“We saw the number of searches on Hobart as a destination by Australians show two-digit growth for five consecutive years, and a 12 per cent increase in 2015 on 2014,” Hotels.com regional director Katherine Cole said.

With MONA’s shove, the state’s tourism numbers vaulted through the million mark for the first time in 2013, and according to Tourism Tasmania, MONA goers spent $719 million in the state for the year up to mid-July 2015.

More than anything, though, MONA has been Hobart’s wave to ride.

The museum has been the gateway to Hobart more than the other way round. And that has shone a bright light on what the city and its surrounds have to offer.

At MONA’s opening back in 2011, the ‘Bilbao effect’ was mentioned and local businesses were warned they had five years to cast a lasting impression or the opportunity would be lost forever.

Aware of this message or not, many people in Hobart and southern Tasmania who had a kernel of an idea have chosen to seize the moment these past five years. Others were inspired to follow. And now with that supposed window just about closed, Hobart appears more invigorated than ever.

From the pop-up coffee carts to towering cranes, the city’s character is being transformed by diverse facets. The new projects seem to be drawing from the same well of quiet confidence.

Even the starkest symbol of Hobart’s former economic lethargy – a hole in the CBD’s retail heart left by the 2007 destruction of the Myer store – has at last been filled with a new department store, with a $45 million Crowne Plaza hotel to be added on top.

MONA is not the only driving force for tourism and development in town but its impact has been pronounced, varied and widespread.

Directly or indirectly, a good deal of Hobart’s vitality is the work of the MONA effect — it has changed the way outsiders think about and act towards Hobart.

“Before MONA arrived you had this somewhat sleepy, unpolished gem of a city with great food, [that] has a great celebration once a year on Constitution Dock when boats arrive from Sydney,” he said.

“What MONA does to Hobart is suddenly give it a huge drawcard.

Hobart’s newfound popularity is driving an expansion of its accommodation capacity.

At peak times Hobart consistently runs at 90 per cent capacity. But right now there are five CBD projects in play that would add 800 beds. A recent report claimed that on current growth, the city would need 1,200 extra beds by 2020.

Would this be happening without the presence of MONA? Independent economist Saul Eslake thinks not.

“I think the prospect of having another 1,200 rooms added to Hobart’s hotel accommodation over the next couple of years is very much related to the influx of tourists that MONA has attracted.

“And those visitors have generally been more affluent and have wanted to spend more on hotel accommodation, restaurants and the like than the kind of visitors Tasmania was attracting before the opening of MONA.”

“I don’t think this restaurant could have been here pre MONA,” said Franklin chef David Moyle. “I don’t think you could have done it on the same scale. It would be a much bigger risk, put it that way.”

Franklin is barely a year old yet is already considered one of Australia’s best restaurants. Mr Moyle said he and his partners, like other businesses, did not open in the bald hope of cashing in on the MONA crowd. MONA’s effect was to inspire a “great deal more confidence” in the venture.

Mr Eslake said the key factor to winning over the MONA crowd was “premium” value.

He said the typical MONA customer stepped off the plane with money to spend and a desire to be wowed. This demographic is not interested in discount flights, and was a key reason behind Qantas adding more Hobart flights.

“There’s a consistent theme here that what works in Tasmania is no longer the old-fashioned bulk production of low-value commodities competing solely on the basis of price but rather products and experiences which do have a unique component to them for which customers will pay premium prices,” he said.

For barista Tristan Lassig, who just launched a more modest start-up, a mobile coffee van, MONA did not enter his thinking.

Mr Lessig found a vintage ute on Gumtree, fitted a coffee counter on the back and, with a supportive council, set up shop in a pedestrian tunnel.

What Mr Lessig did credit MONA with was a general perception amongst would-be self-starters that being different was more than okay – it was almost mandatory.

“The thing I noticed once MONA got here was that it pushed people to start doing really unique things,” he said.

“The more unique you were the more likely you were to have people come around and say hello.”

Of course, many successful local businesses preceded MONA. Tasmania’s produce, wine, whiskey and craft beer had already forged their own collective cachet. For more than 20 years they have been showcased at the annual Taste of Tasmania festival.

But new eateries, cafes and shops are changing the complexion of the city. There are even new precincts up and running (like the Brooke Street Pier), in development (Parliament Square) or envisioned (Macquarie Point). And the spirit of enterprise is feeding off its own momentum.

“When I first moved here there was probably two or three places I’d go to for coffee. Now you don’t have to think about it – you can get a good quality coffee in the CBD or surrounds. Same thing with dining out.”

“You see the amount of businesses that have happened in the past three to five years.

“The reason why it’s working is because there’s always been an underpinning, there’s so many amazing artists, furniture makers, small scale growers that are here because they want to make their ideals work.

“People who already have concepts and thoughts and go, ‘Right, now’s the time to pounce’.”

Brian Ritchie first came to Hobart in 1989 with his band Violent Femmes. He remembers being floored by the profuse thanks the band received just for turning up.

“In 1989, for a touring rock band to come and play a gig in Hobart was like a miracle to the local inhabitants,” he said.

“Now it’s almost like an embarrassment of riches. The amount of activity, at least visiting activity, has increased incredibly.”

Ritchie has had a lot to do with that change. In 2008, he and his partner Dr Varuni Kulasekara, an entomologist, relocated from New York to Hobart. The next year he became a key player in the MONA effect.

Asked to put together an art and music festival for the Salamanca Arts Centre, he was advised to approach David Walsh for funding. Mr Walsh liked the idea so much, he bought it. So three years before his new museum became a reality, the MONA Festival of Music and Art (MOFO) was launched.

“We hit it off right away,” Ritchie said.

“We had enough in common so it was worth teaming up but we had enough differences so that we could reinforce each other.”

The festival was “absolutely, 100 per cent a marketing exercise” to build MONA’s profile and community good will. It was a teaser, providing a glimpse of the museum’s aesthetic in music form – an eclectic, non-commercial experience for which punters were asked to take a leap of faith.

Ritchie admits even though he puts the program together he does not know what to expect from the acts he has invited to perform on commission.

“A lot of times I’m taking a punt with programming some of that stuff,” he said.

“So sometimes it’s just as much of an adventure for me as it is for the average punter.”

By last year’s figures, some 20,000 interstaters prepared to take that punt will be descending on Hobart this week, and no local business worth its salt would be unaware of the coming influx.

Because of that tourist dollar MOFO remains key to Hobart’s broader economy. As does its winter version, Dark MOFO, which has single-handedly boosted Hobart’s mid-winter dead spot.

Like MONA itself, its festivals inspire people to not just look but book.

“Anyone who’s close to tourism and travel will know that events drive visitation in the immediacy because it overcomes that ‘One day I’ll get there’ to suddenly ‘I’ve got to be there for this particular event’,” Mr Long said.

Mr Walsh makes no secret of the fact that MONA loses money. The festivals too do not make a profit in their own right. The Tasmanian Government contributes $350,000 to MOFO and $1 million to Dark MOFO.

However long MONA serves as a drawcard and gateway to the capital and the state beyond is anyone’s guess.

But the job could be at least half done, considering the feared Sunday Times critic AA Gill recently declared that he would much rather go to Hobart than Rome, Moscow or Istanbul.

Mr Gill, who attended last year’s Invite the World to Dinner dining extravaganza – held, where else, but MONA? – described Hobart as “a museum with a great town attached”.

“There is nowhere else I know that has quite the same synthesis of old, new, indoors and outdoors, sophisticated and handmade, all set in a landscape that will stay with you forever,” he wrote.

“You walk along a dramatically romantic coast through the flocks of seabirds and the fringe of dunes and eucalyptus forest.

To sustain that kind of effect remains Tasmania’s challenge, not MONA’s.