The hazard in Clubs running child and aged care 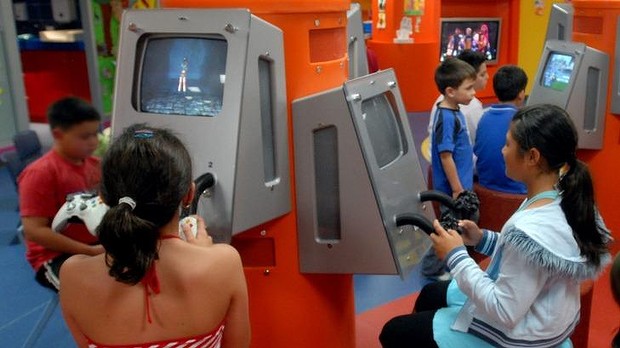 SMH: Cradle-to-the-grave: Children play with pokies-style machines in the creche at the Mounties Club in Mt Pritchard. Photo: Adam Hollingworth

No good can come from binding our lives to the clubs

“The clubs industry could significantly benefit from creating a ‘cradle-to-the-grave’ level of engagement with their local communities.”

You bet they could. So could club members and even some families in the wider community.

It just seems way too good to be true.

That’s because it is.

Any benefits from the expansion of the poker machine industry into the delivery of cheap childcare and aged care services will come at an enormous cost.

The victims will be a significant number of problem gamblers and families exploited by clubs to ensure poker machine revenue keeps flowing and club facilities keep improving.

Do we really want our community services funded on such an immoral basis?

The cradle-to-the-grave scenario was proposed in a McKell Institute research paper which the clubs industry submitted to the Productivity Commission’s inquiry into childcare. The PC report is due on Friday.

The Baird government in NSW has also struck a deal with clubs to offer them extra tax breaks for offering more aged care and childcare services.

Critics of the childcare push, including the Greens in the Senate, have focused on a red herring: that children shouldn’t be in gambling venues. They probably shouldn’t, but the clubs simply argue they put safeguards in place and meet all mandated standards of care.

Other critics point out that the clubs enjoy tax and other benefits not available to rival businesses. As such the clubs will be able to undercut competitors and could abuse market power.

While everyone has been distracted with those points, the most insidious aspect has been overlooked.

Clubs boast of being “not for profit” organisations.

But they are not NFPs in a purely altruistic sense.

Most NFP revenue comes from willing donors or business operations where people buy goods knowing the proceeds will go to a good cause. The NFPs get tax breaks to help them along.

Clubs, by contrast, draw a significant share of revenue from problem gamblers who lose money when they are not in control of their faculties and are unable to stop. Governments even reward the clubs with tax breaks for doing so.

The Productivity Commission says clubs rely on problem gamblers for about 40 per cent of their revenue.

So every time you walk into your club for a cheap night out, or drop your child to cheap club childcare, or put your parent in the cheap aged care facility, remember that you are part of what experts in white-collar crime call a “ponzi” scheme.

The business model of the clubs requires revenue for the benefit of members to flow from a succession of new investors – poker machine players. They are enticed with promises of impossible returns from machines designed specifically to prey on human frailty.

Some players become addicts. In NSW there are almost 50,000 of them.

The clubs need to groom new pokies addicts every day because they have a life cycle of about five years: from putting a few dollars through the pokies; to using the rent money and eventually the savings; until their lives are broken and there is no more to give.

If clubs plan to offer more cheap childcare and aged services, they will have to be subsidised with revenue from problem gamblers. Even if the clubs only make a small subsidy, they have the land and buildings to keep overheads down. How did they get them? Largely from the losses of problem gamblers.

Sure, clubs do many good things. Members volunteer to help the disadvantaged and needy, often using club facilities. Some of the money sourced from addicts funds community aid projects, too. The McKell Institute reckons almost two-thirds of club revenue after wages and taxes goes to social contributions.

But one-third does not. And as the Henry tax review said, if governments wish to subsidise clubs to encourage community donations, they should do so through direct expenditures, not through tax breaks that encourage more gambling.

As Australia relies more on clubs for essential social services, governments will increasingly withdraw from funding and be compelled to keep ignoring the damage inflicted by pokies.

So clubs stand ready to become places where we meet partners, get married, take our toddlers for birthdays, send them for childcare, sign them up for club-sponsored sports teams and drive them to the game in sparkling 4WDs fresh from subsidised car washes. We enjoy subsidised fishing trips and gyms. We get smashed on cheap beers at 50th birthday parties in the auditorium. We play bowls on subsidised greens. We move into the cheap nursing home next door but come back into the club for subsidised lunchtime meals. We play subsidised bingo on Tuesdays and even put a few dollars through the pokies.

And all the while the problem gamblers, generation after generation, lose their dignity and livelihoods to fund our wonderful club life.

The choice is yours.