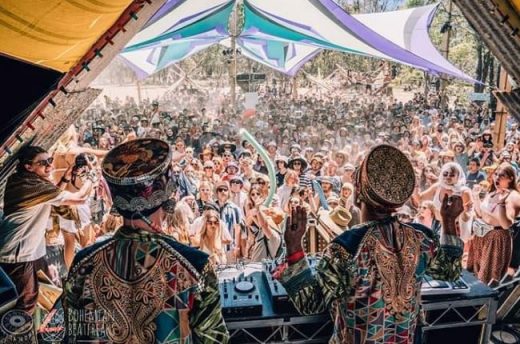 A Queensland council has refused a permit application for a local festival organised by the same events company responsible for the Rabbits Eat Lettuce festival, where two people died this year.

Dassarn Tarbutt, 24, and Ebony Greening, 22, from Maleny and Nambour, were found dead in a tent at the festival about 9.30am on the final day – Monday, April 22.

Their causes of death were undetermined but police were treating them as suspected overdoses.

The Bohemian Beatfreaks and Rabbits Eat Lettuce festivals are both held at Cherrabah Resort in Elbow Valley, almost 110 kilometres south of Toowoomba.

“The music festival was denied approval after strong objection from the Queensland Police Assistance Commissioner for the Southern Region and as well as issues surrounding safety and community benefit,” the council statement said.

“A previous event, hosted at Cherrabah Resort, raised issues that highlighted the concerns for the safety of all community members and which were also referenced in communication from the Queensland Police Assistance Commissioner of the Southern Region.

“In not supporting the event, Assistant Commissioner Mike Condon cited an excessive strain on local law enforcement’s resources as well as considerable safety concerns for attendees and surrounding community members.

“Council found that the issues raised by the Queensland police and other concerns submitted by community members were not sufficiently offset by measures listed in the event application by Rabbits Eat Lettuce Events.”

“Should the organisers take measures to meet these concerns surrounding safety and strain upon local police, there is no reason that future event applications should not be submitted,” she said.

“Council noted that the issues raised within the review of the application outweigh the proposed benefits to the community.”

The Bohemian Beatfreaks festival has been contacted for comment.