Veganism is getting the crowds in 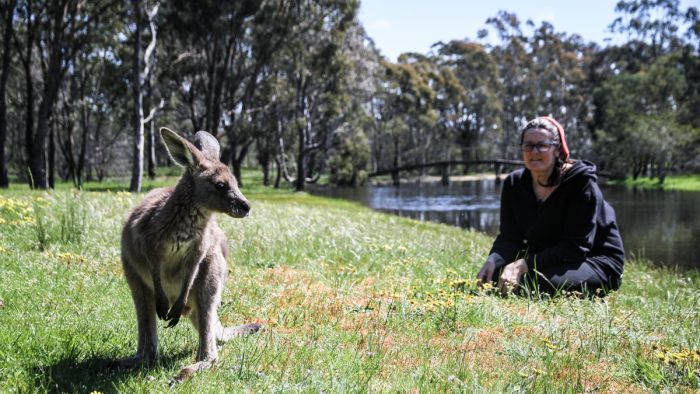 PETA has named Castlemaine (in Victoria) as the most vegan-friendly small town in Australia, with many businesses offering vegan options.

Castlemaine vegan cafe owner Caithlin Meave watched her father skin a rabbit when she was a young girl.

The graphic image proved the catalyst for a gradual “transition” over the years to becoming a vegan, which was further influenced by Ms Meaves then-baby’s dairy intolerance.

Ms Meave now specialises in raw food after becoming a raw vegan about 12 months ago after a decade of veganism.

And her’s is not the only business in the small town catering to vegans.

According to Claire Fryer from People for the Ethical Treatment of Animals (PETA) the small town tops the organisation’s tally in offering at least nine vegan-friendly food businesses.

“Which is quite a lot considering there is only a population of around 7,000 people,” she said.

She said the town reflected the growing popularity of the vegan movement in Australia, which is becoming “bigger than ever” if Google trends data is anything to go by.

“We have the highest percentage of searches for the word vegan of any other country for the last year,” Ms Fryer said.

Australians are increasingly becoming concerned about their health, the environment and the treatment of animals.

“They’re starting to take a lot more interest in eating, and obviously a lot of people are choosing to either cut animal products or certainly to cut down animal’s products as a result of that,” Ms Fryer said.

She said recent research found there were 2.1 million vegetarians across the country, with many more reducing their meat intake.

“More than half the population has agreed to eating less read meat,” Ms Fryer said.

What type of vegan are you?

According to Ms Fryer there are different types of vegans.

Some people eschew all animal products in food and other items such as clothing, to avoid animal exploitation, while others might not follow a fully vegan lifestyle but chose a 100 per cent plant-based diet.

Add raw vegans and paleo vegans to the mix and it becomes a broad range of interpretations.

Ms Maeve calls being a vegan an intent.

Eliminating animal products from her diet is not just for health reasons, but about the social and environmental impacts of eating animals.

Concern for the planet and the future lives of her children and grandchildren are paramount in her choice.

She thinks there is no ethical way to kill an animal she refers to as sentient beings.

“You know even if you treat animals nicely, they still end up walking into an abattoir alive and come out cut up into little pieces,” Ms Meave said.

But rather than use the vegan label Ms Meave prefers to say she does no eat animal products and also does not sprout the term vegan in her business.

“Because if I say I’m vegan people immediately get defensive,” she said.

So along with fresh nut milk and soy milk she also uses dairy milk to keep some customers happy.

However, sometimes people get more than defensive.

Ms Meave’s 11-year-old daughter Iskhar, also a vegan, was the subject of bullying at her school.

“She was teased regularly at lunchtimes with people throwing meat at her and hassling her about meat,” Ms Maeve said.

The book that changed everything

Nikki Medwell from nearby Elphinstone, who runs Australia’s only all-vegan bed and breakfast called Bed and Brocolli with her husband, has been a strict vegan for the last seven years.

The two do not eat honey, there are no woollen underlays on their bed, no feather down quilts, leather shoes and visits to the zoo or circus.

The self-described animal lover runs an animal rescue shelter on her 60-acre property taking in ex-factory farm hens, a couple of “bobby calves”, unwanted male calves from a dairy and native animals including two joeys she is nursing.

She said she caters to a growing curious market of not only vegans but vegetarians, ethical eaters and what she terms the “pre-vegans”.

She does wear second hand woollen jumpers and leather wear from second-hand shops.

“Because you haven’t contributed to any harm from any animals, so if it’s second-hand you’re recycling and you’re not contributing directly to any cruelty or cruel industry,” Ms Medwell said.

Raised a vegetarian, veganism was not a radical departure. After reading Eating Animals by Jonathan Safran Foer, her world changed.

“I got a third of the way through the book, closed it, basically went and emptied out my fridge, my pantry,” Mr Medwell said.