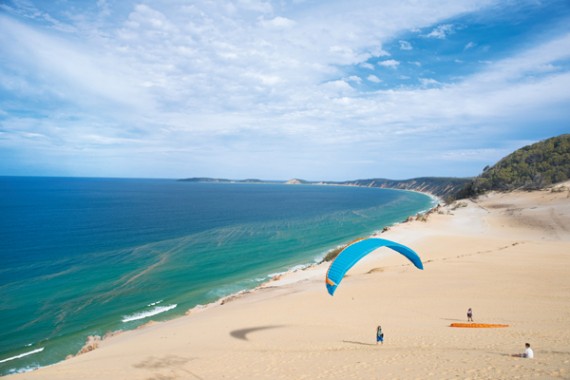 From the Gympie Times

As she is fond of saying, Rainbow Beach was built on them.

The Rainbow Beach Foodworks’ proprietor is currently all swept up in a project to raise money for a beach rake, the mechanical kind that keeps beaches clean in many other tourist spots.

After recent storms left the beach strewn with debris, hordes of volunteers did a pre-Easter clean-up, gathering the snags and plastic.

“When we’re rated the best beach in Australia, which we are, we’d better start looking after the place.

“There’s a rake we think we can afford coming up for auction at the end of April and we need to be able to make a bid,” she said.

“We’ve been collecting in the shop, with people putting in their loose change and people are making donations.

“We started it in October at a public meeting and Rod Parker from Ed’s Bakery immediately gave $1000.

“That was the first of our big pledges. Seventh Wave gave $2000, we gave $2000 from Rainbow Beach Foodworks, Cafe Gelati gave $1000 and the Lions Club and Progress Association pledged $1000 each.

“Anyone can buy a rake for $200, as long as they don’t really expect to get a rake. They get one on paper,” Mrs Modin said.

“We (are) having a $2 raffle. As chook raffles go, this is one of the biggest we’ve done. We’re going to need a really big chook!”

Mrs Modin said donors could send a cheque to the Rainbow Beach Progress Association (“Mark it rake,” she advises) and they could send it care of Ruth Modin, Rainbow Beach.

“Make the reference ‘rake’ and it will go to the right place,” Mrs Modin said.