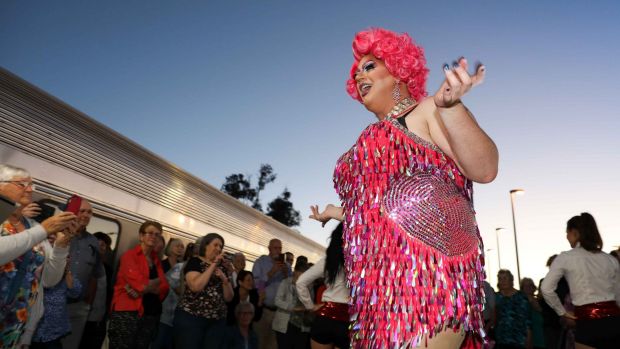 Shalita Buffet at Broken Hill railway station. She performs once a week in The Main Drag.  Photo: Russell Millard

For remote Broken Hill, the 23-year-old movie Priscilla, Queen of the Desert is the gift that keeps on giving, now on a weekly basis for an exclusive audience of mostly retirees.

The jokes may be more Dame Edna Everage than Oxford Street, Sydney, but every Tuesday night local drag queens Shalita Buffet and Christina Knees-Up put on a risque-ish one hour show in Broken Hill’s Palace Hotel where some of the famous movie was shot.

Locals are always asking the stars and the hotel if they can attend. But the show, The Main Drag, is only available for train passengers travelling on the Indian Pacific from Perth to Sydney who are making a short stop in the town.

“Do we look gorgeous? Do we look sexy?” Shalita asked the 75 passengers who opted for the show over a visit to the Broken Hill regional art gallery.

When the raucous applause doesn’t match Shalita’s expectations, co-star Christina urged the crowd to drink up; “The more you drink, the prettier she looks.”

Christina, a blonde by night and a book keeper by day for the Royal Flying Doctor Service, has been performing in drag for many years, except when marriage and life got in the way, she said. Shalita had never been on a stage, until auditioning for the new show. In heels worthy of Priscilla, and pink hair that adds another 20 centimetres, Shalita seems twice the height of the average shrinking retiree at the show. With jokes about her ravenous appetite, she puts the burly in burlesque.

The two performed together at this year’s Broken Heel Festival, the third annual homage to the film starring Terence Stamp, Hugo Weaving and Guy Pearce. Teetering around in high heels for three days days, though, caused an infection in Christina’s toe, which was later amputated, she said.

At this year’s festival, which coincided with the beginning of the Marriage Equality postal vote, the council voted to buy and fly rainbow flags from the Town Hall.

It was a decision Mayor Darriea Turley said was her proudest yet.

Priscilla now brings international and domestic visitors all year round, not only during the festival.

“Who would’ve thought that the economy of a mining town would grow on the back of a group of drag queens?” she said.

Esther La Rovere, the director of the festival and the Palace Hotel, said the show was helping to increase acceptance. It was often the first drag show that many of the 4000 guests, who have seen the show since it started18 months ago, had seen.

“I guess maybe they feel comfortable. The building has a history associated with Priscilla, and it is not 2am and they are not in the Kings Cross and they don’t have to go too far out of their comfort zone to participate. Also it is part of a luxury train trip,” she said.

Ms La Rovere said Broken Hill’s drag history was very much accidental, and in the movie, the town’s reaction to the drag queens had been mixed. They drank the locals under a bus, but they woke to find their bus defaced with “AIDS F—ERS go home”.

While that dark undercurrent remains, most locals had embraced the town’s history.

“There has always been a subculture that has embraced it, but now, because of the growth of the movie into an Australian icon, the sub-culture has been accepted more broadly. Why wouldn’t you celebrate when you see it [the musical based on the film] sweeping around the world? It challenges your stereotypes and in a city where it comes from, why wouldn’t you embrace it?” she said.

For new widowers John Lavington of London and Neil Keating of Nowra, the show was a bit of fun, and a distraction.

Mr Lavington had always wanted to see the town after seeing the movie many years ago.

Asked about the movie’s impact on tolerance for homosexuality and Australia’s failure so far to allow gay marriage, Mr Lavington said: “We have been around it for too long for it not to be part of the norm.”