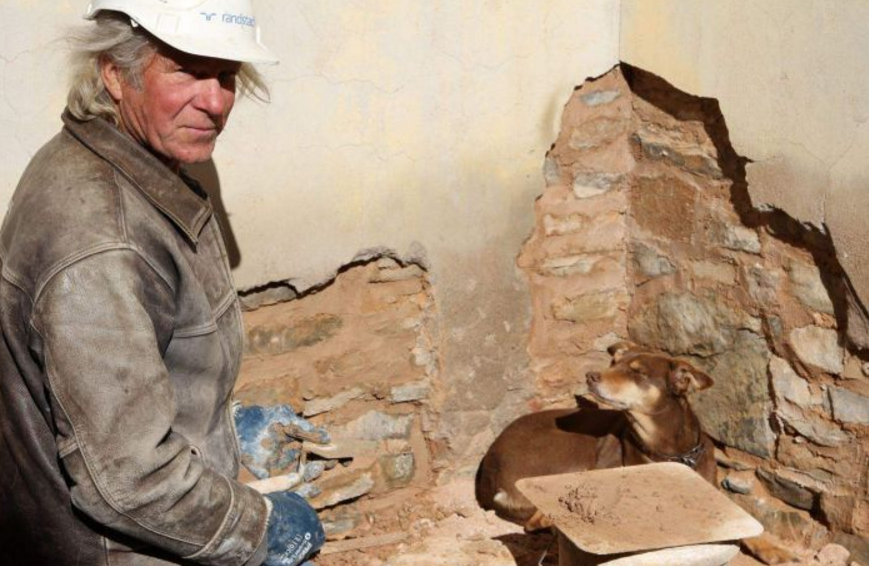 From over the horizon, the first caravan appears. Tagging along behind are two more.

Seven hours north of Adelaide, the convoy is headed to Farina, a once-thriving town on the edge of the Birdsville Track.

In its heyday, Farina had a population of around 600. Today its permanent population is zero.

Farina used to be a major trucking yard for cattle and sheep that would travel down the Oodnadatta, Birdsville and Strzelecki tracks.

Is it a tough place to live?

“It can be, but I do think we have it a lot easier than people in the past,” Ms Dawes said.

The town of Farina lived and died by its railway line. When the railway line was moved, the town began to crumble. Lack of rain had already taken its toll.

But eight years ago, a group of retired caravaners came up with a plan to help restore the town. Mr and Mrs Dawes jumped at the idea.

“I just think the historic parts of Australia are very important, about the early settler and all that. And I don’t think we should ever lose that,” Mr Dawes said.

Now it is grey power that is bringing life back into a crumbling town.

Steve Harding, a team leader with the Restoration Farina group, said working on the town gave people a purpose to travel to the outback.

Julie Singer is one of more than 100 volunteers who travel out to the town each year to lend a hand.

“The average age of people here is probably about 67 or 68. Most people like myself recently retired, and there are some younger ones as well,” Mrs Singer said.

“We have a big bunch of people, for eight weeks of the year, these grey nomads.”

It is an underground bakery that was restored after lying dormant for almost a century that funds the restoration efforts.

On the day 7.30 visited, he had been up long before first light getting the oven fired up to start baking for the day.

“This is how we make our money to continue the work here,” Mr Baskerville said.

“All the money raised here from the bakery goes to the project and it takes quite a lot of money to purchase the supplies that we need to stabilise the walls, the lime mortar and the cement.”

It also pays for two professional stonemasons to help lead the restoration efforts.

Peter Russell is full of praise for the past craftsmen of Farina.

“Well the walls are nice and plumb and the brickwork is plumb,” Mr Russell said.

“You can always tell a house or a building that is put together by someone who wasn’t a mason, because the stones are all over the place, but these are nice flat walls.”

“We would like to build a museum next year which will be a bakery and museum area. The idea being that we can demonstrate how to make products in a bakery and display the artefacts from the area in the museum.”