Adelaide Fringe gets balance wrong for 2016 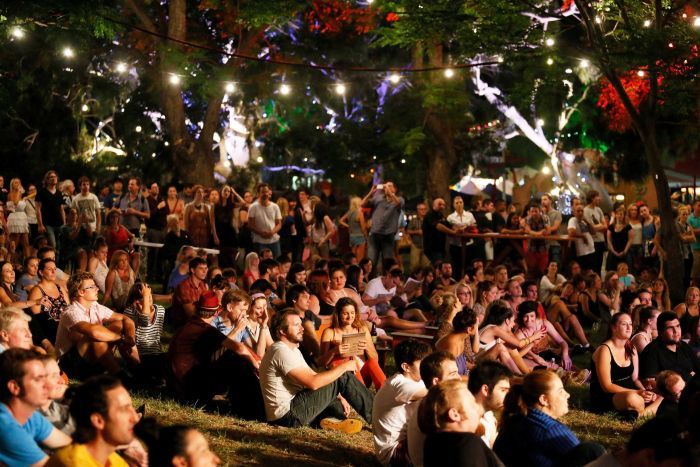 TTN: The Adelaide Fringe’s huge crowds are still turning up – but more for nights out partying and sight-seeing rather than to shows, leaving genuine ‘fringe’ artists (not mainstream/ up and coming) on the outer fringe of a fringe show.

With over 40% of tickets being sold for smaller venues (as opposed to previous years’ 20% small-venue sales), event organisers concede that it’s the competition of over 1100 shows that has left some performers without sell-out crowds.

British comedian Alexis Dubus has vowed not to take part in future Adelaide Fringe Festivals because he said it was being driven by “greed and complacency”.

The comedian has performed at the Fringe since 2009 but said it had lost its “exciting, exuberant, experimental” spirit and was now driven by large venues, which drew large crowds of drinkers but not audiences.

“I think the duty of a Fringe is to get people out of their comfort zone and to get people seeing things that they wouldn’t normally go and see and that will challenge them a bit,” Dubus said.

“The big hubs are attracting the sort of people who come there solely to drink.”

He also lamented poor ticket sales to his shows and those of fellow performers at smaller venues.

“It takes months and years to write these shows sometimes [and they] are just not getting bums on seats anymore even though they are very much Fringe shows.”

The Adelaide Fringe Festival’s director Heather Croall conceded some good shows had not drawn strong crowds but she said, overall, the Fringe was still likely to make record sales this time around.

“We’re actually on track to have a bumper record year of ticket sales and what we’re seeing is 60 per cent of the tickets are in the Garden of Unearthly Delights and the Croquet Club and Gluttony … and around 40 per cent are in the smaller, independent venues which is actually a very good split,” Croall said.

She said in past years venues outside the large hubs only accounted for 20 per cent of sales.

PHOTO: Only some of those going to Fringe venues are bothering to watch the shows, a producer says.(Supplied: Tony Virgo, Adelaide Fringe )

Independent producer Anita Kazmierczak has brought five acts to this year’s Fringe and she has supported some of Dubus’ criticisms.

“There’s a least 1,100 shows competing against each other so it is a very, very competitive market, so some of his points are very valid,” Kazmierczak said.

“Maybe over the last 10 years people’s idea of the Fringe isn’t going to a show or buying tickets to a show, it’s queuing up outside one of these massive venues just to sit in there and drink beer and they may do that a few times a week and especially on the weekends, without ever buying a ticket.”

Croall said while a few shows in small venues had not had great sales, that should not be viewed as “all doom and gloom”.

“Maybe this will help Adelaide audiences remember that there’s hundreds of venues out there and we really encourage everyone to help us come home strong this Fringe because we want to break the record and make sure the artists have a good time in Adelaide and come back again,” she said.

Croall said the last thing she wanted was artists saying they had better sales in other cities and she encouraged people to make the most of the Fringe’s remaining eight days and nights.